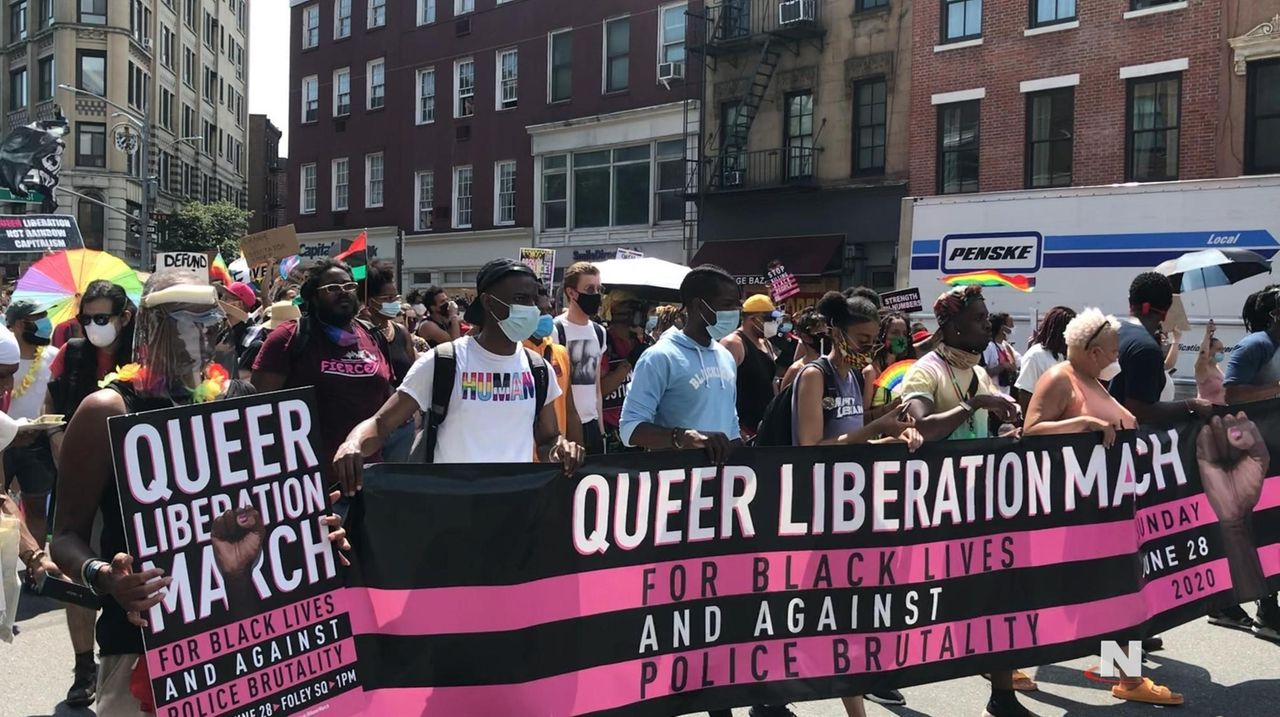 A 68-year-old man who marched in the first gay pride parade, in 1970, said that this year's event, protesting the NYPD and marked by a lack of the frivolity of recent Pride parades, was more like the one of his youth.   Credit: Newsday / Matthew Chayes

Tens of thousands of people marched from lower Manhattan up to Greenwich Village on Sunday, part of a “Queer Liberation March for Black Lives and Against Police Brutality” that, like many recent protests, defied the state’s order barring mass gatherings during the coronavirus pandemic.

The march, by a splinter group called Reclaim Pride, commemorated the 1969 Stonewall Riots that jumpstarted the modern gay-rights movement.

While the city’s official Pride event streamed only online — it was canceled in April due to the pandemic — the protest in the streets of Manhattan on Sunday was organized by the splinter group. The group scrapped its own online-only plans, due to outrage over George Floyd’s bystander-recorded death in Minneapolis while a police officer pressed his knee into Floyd’s neck. Among the marchers’ demands: to cut at least $1 billion from the NYPD’s $6 billion budget.

Official LGBTQ Pride marches of recent vintage had cops and correction officers marching in uniform, often being cheered by onlookers, with corporate sponsorships and even rainbow-colored vehicles from the NYPD, Correction Department and other government agencies.

“The march today is more similar to what we had 50 years ago when we marched from Christopher Street up to Central Park on Sixth Avenue — no floats, no bands, no balloons,” said Rick Landman, 68, a lawyer who lives in Tribeca who participated in the first such anniversary march, in 1970. He held a sign, standing near the beginning of the march: “Same Struggle — Same Fight.”

“It was a demonstration against the police abuse and harassment that was going on in the 1960s in New York City,” he said.

What happened at Stonewall on June 28, 1969, was typical for the era: the NYPD raided a gay bar and began to arrest patrons. But that night, the patrons fought back, hurling bricks and fists and trash cans at the cops. The next year, the march in which Landman and thousands of others partook was marked by some cops turning their backs in disdain on participants, and several onlookers sought to disrupt the parade.

On Sunday, Dr. Ilon Rincon came from a COVID-19 testing site in Queens, after volunteering there, to join the march in Manhattan.

Rincon, who is a nonbinary person — someone who does not identify completely with traditional notions of male or female — held a rainbow handkerchief and wore an N95 mask.

“I like that everyone’s wearing a mask. I think that we need to unite our voices with the Black Lives Matter movement, as a queer person,” Rincon said. “We have been marginalized for many years — for centuries. We know what it’s like to be othered.”

In 2020, there did not appear to be hecklers, and Sunday was mostly peaceful and marked by relative police forbearance.

But at about 4:15 p.m., a scuffle broke out between NYPD and marchers near Fifth Avenue, north of the Washington Square Arch, as hundreds jeered the NYPD, and officers from nearby ran into the crush.

During the melee, pepper spray was unleashed, apparently by the NYPD, striking several civilians, as well a Black cop, who writhed in pain and covered his eyes while fellow cops led him away and splashed water on his face.

“Haha!” jeered a marcher who is Black. “You’re a Black man defending the white-man cops!”

Around the same time, several cops on two-wheeled scooters tried to advance through the crowd on Washington Square North. One fell over into the gutter after a sergeant shoved a marcher, who then lost his footing and bumped into the cop and his scooter. Another marcher, with a rainbow sign, and a fellow cop helped him up.

“The whole world is watching!” the crowd was chanting, as the police appeared to be making arrests. “Hands up, don’t shoot!”

Sgt. Mary Frances O’Donnell, an NYPD spokeswoman, said later Sunday that the day's march was largely peaceful. She said the altercation near Washington Square Park began when three people tried to tag a police vehicle with graffiti. The crowd tried to interfere with the arrest of those tagging the vehicle, she said, but the three were ultimately arrested.

About a half hour after the altercation near the park, on Waverly Place and Sixth Avenue, hundreds of cops in riot gear, some on bicycles, began to muster in the vehicle lanes, cursed and jeered by demonstrators. Uptown traffic stopped. Several demonstrators, including one in a rainbow sock and another wearing a “BLACK TRANS LIVES MATTER” T-shirt, shouted “Go!” and directed the vehicles to proceed.

The cops moved. Several of the demonstrators encouraged the motorists, “don’t move over! Stay in your lane!” — which would be into the path of the officers. The motorists maneuvered around the cops.

2:23
Stormy landing: Anchor from 1876 disaster finds a home
Should kids get a shot? Long Island parents differ on COVID-19 vaccine
A third Pfizer shot? It's 'likely,' says CEO
NY reports virus positivity drop but state worse than others
50:48
Panel: Want your kids back in school? Get a COVID-19 shot
1:56
Judge upholds $2.7M verdict against town, driver in fatal 2016 crash
Didn’t find what you were looking for?