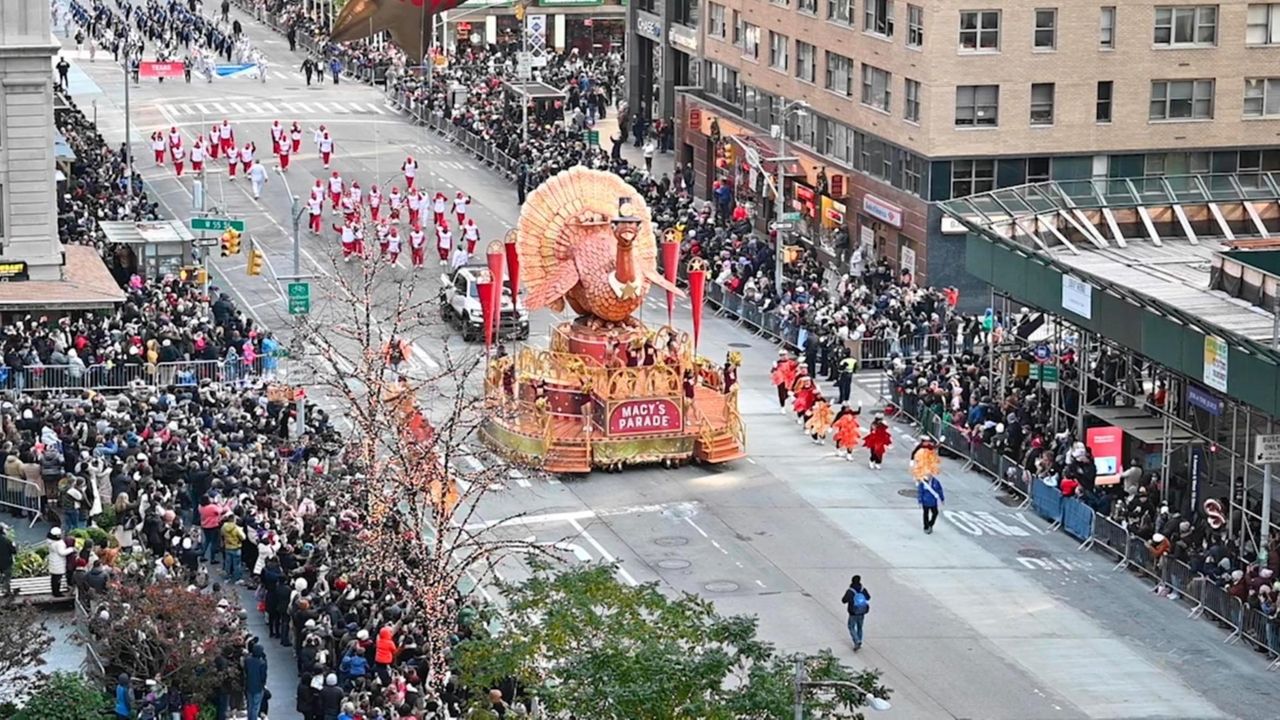 Hoisted onto his dad's shoulders behind barricades on Sixth Avenue close to 41st Street, 3-year-old James Basnight of Huntington squealed with joy when, somehow, he spotted the 43-foot-tall balloon of a "Paw Patrol" character passing near Central Park — almost 20 blocks uptown.

"We got Chase! Chase, Dad!" James said, smiling and pointing skyward to his father, Jim Basnight, 37, who works in sales. The boy's grandparents doted nearby.

The Macy’s Thanksgiving Day Parade, all but canceled a year ago due to the coronavirus pandemic, was back for 2021.

The parade, telecast on NBC television, was in its 95th year and featured floats, marching bands, balloons, a jump-rope team, clowns and thousands of volunteers in the streets, with tens of thousands of spectators from around the world crammed onto sidewalks.

"Happy Thanksgiving!" was the refrain cried out too many times to count.

Floats and balloons Thursday included Snoopy, Pikachu, Ada Twist, Gravy Pirates, Baby Dinos and the Jolly Green Giant. Each balloon, some as tall as a four-story building, had a "pilot" who wielded a wind monitor, which helps parade organizers decide whether a particular balloon is safe to fly. Below were a team of handlers, and many balloons had an NYPD cop tagging along.

Attendees crammed into pens near the parade kickoff at West 77th Street and Central Park West down to Herald Square, near 34th Street, Macy's flagship store, about 2.5 miles in all.

This year, under city rules, those in attendance had to show proof of coronavirus vaccination. The youngest children didn't march this year. Only a small, select group watched in person a year ago because of the pandemic, and the parade was a block long. At the time, the second wave of the coronavirus pandemic was ripping through the city and country, and there was no vaccination available to the public.

"Thankful the Parade is Back!" read a sign made and held by seventh-grader Madison Widelko, 12, who lives near Manhattan's South Street Seaport and attended with her mom and a friend.

A year ago, Madison said, she watched the parade on TV, missing the in-person tradition.

"Last year, we weren't able to see the parade in person," she said, "and we're really happy that we're here and we can see it in person."

The sand-filled blocker trucks — long parked on side streets to prevent an unauthorized vehicle from being driven into the crowds — took on new resonance this year after tragedy at a Wisconsin Christmas parade Sunday. A fleeing driver crashed into that procession, authorities said, killing six and leaving dozens more injured.

The parade in New York City was safe, and the procession drew chants and cheers.

As at past Thanksgiving Day parades, schoolteacher Cindy Crespo, 42, of North Bellmore made a laminated printout with prominent balloon and float characters for her children, Sophia, 9, and Xavier, 7, to mark off as each passed by.

There were even bonuses. (Crespo didn’t want to ruin the surprise by revealing what to a reporter with the kids within earshot.)

"There’s a lot of cool inflatables that I like," said second-grader Xavier, who was stoked to see Boss Baby from the Netflix series float by. ("I was thinking that maybe I should watch it when I get home!")

His sister said she was excited to mark off Pikachu, of the "Pokémon" franchise.

The Thanksgiving parade was the first for Jamie Baio, 22, of Sayville, who woke up before sunrise and described the spectacle as "epic" as the mascot of the frozen and canned vegetable brand passed.

"Love the Jolly Green Giant — personal fav of mine," he said near 42nd Street, adding of the parade: "It's really, really cool. It's like a dream come true. Like, I've always seen it, but I've never been here before."

After the parade, Baio was planning to return to Sayville for Thanksgiving dinner with his family, including his grandparents, newborn niece, and police officer brother, who worked Thanksgiving morning and would be at the meal.

Near Central Park at the end of the parade was John Gallagher, 62, also of Sayville, with his grandchildren, daughter-in-law, son, and fiancee. He said he's been coming to the parade for decades.

"We come here as a family ... as often as possible, just to enjoy the day and the beautiful weather," said Gallagher, a retired FDNY firefighter, explaining: "Giving thanks, blessings."

Liv Bianco of Port Jefferson, a sophomore who’s 15 years old, sat in the gutter with a friend under a tin foil blanket. Her parents, schoolteacher Theresa and Riverhead police officer Bill Bianco, stood above.

She said she was there for the celebrities, particularly the singer and actor Darren Criss.

Theresa Bianco noted that since she was at the parade, "I don’t have to cook. I get out of cooking."

That duty, she said, fell to her mother-in-law.