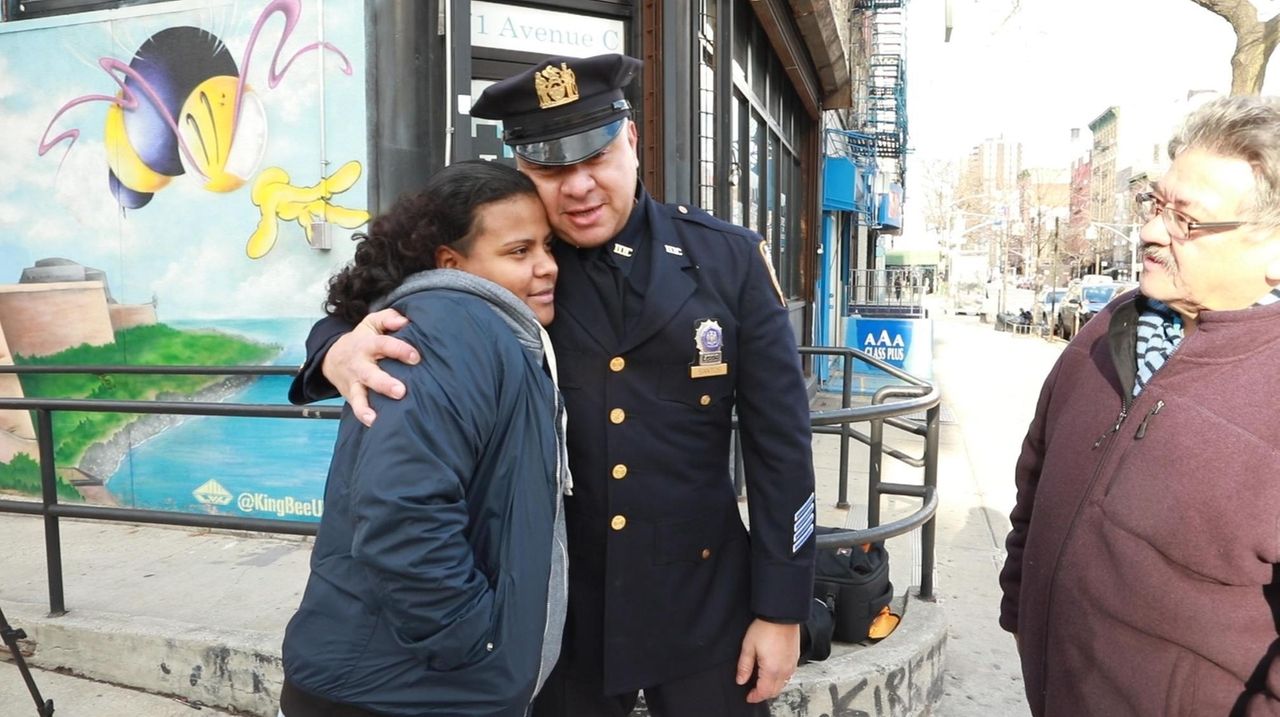 Sofhia Cochegrus, a 20-year-old college student from Manhattan, learned at an early age how a chance encounter can change a life. In fact, one such encounter saved hers.

It was March 1, 2004 when her father, Eric Cochegrus, was unable to dislodge a piece of bubble gum blocking the then 5-year-old's windpipe. In hysterics, he ran along East 5th Street in the East Village section of Manhattan, carrying his unconscious daughter and screaming for help from anyone listening.

Fortunately, one of those within earshot of the commotion was NYPD Officer Carlos Santos, at the time assigned to the 9th Precinct, who jumped out of his department vehicle and performed the Heimlich maneuver until the chunk of bubble gum popped out.

Nearly 16 years later, Santos, of Bellmore, Cochegrus, now a junior at SUNY Canton, and her father had a reunion of sorts at the very spot in Manhattan where her young life might have ended had the cop not happened on the scene.

“The only thing I remember was the oxygen mask being put on me,” the criminal investigations major told Newsday Wednesday at the corner of East 5th Street and Avenue C, as both Santos and her father stood nearby.

Santos, now 47 and a member of the special NYPD force investigation division, remembers that day vividly. So does Eric Cochegrus.

“I was running with her and when I saw the police I stopped," he said.

Santos described jumping from his NYPD vehicle and running to the 5-year-old as she lay unconscious on the sidewalk. He then performed the Heimlich maneuver. On the third try, Santos was able to dislodge the gum. The little girl was taken to a nearby hospital, where she recovered.

“I thought there was definitely something going on with the daughter, some medical issue, she wasn’t conscious, he was holding her and she wasn’t moving any of her extremities,” said Santos, a 22-year NYPD veteran. “I knew I had to do something."

The street corner meeting Wednesday was actually the second time Sofhia Cochegrus and Santos have met since that fateful day in 2004. The first time was last fall when her older sister, Alysia Velez Galarza, arranged a surprise meeting at her Bellmore home — just three minutes from Santos' residence — for the college student and the lifesaving cop.

“It was great," Santos said. "She was very surprised to see me. At first, she didn’t recognize me.”

His wife Noreen said the reunion won't be their last one.

“It was very heartwarming. It was incredible to see her after so many years,” she said. “We will continue to be in each others lives.”

After the street rescue, Santos was given an award as the NYPD cop of the month. An old photograph shows Santos and a smiling Sofhia, her dark hair done in braids. In the photo, Sofhia holds the award plaque while Santos grasps a bouquet of flowers.

So many years later, Sofhia is certain her chance encounter with the quick-thinking Santos was an inspiration for her decision to pursue a career in criminal justice and apply to the NYPD after she graduates. She minors in forensic science and criminology.

“I think it definitely played a role in it,” she said. “If it wasn’t for him saving me I definitely wouldn’t be where I am today … so I definitely am grateful to him and definitely grateful that this situation happened.”