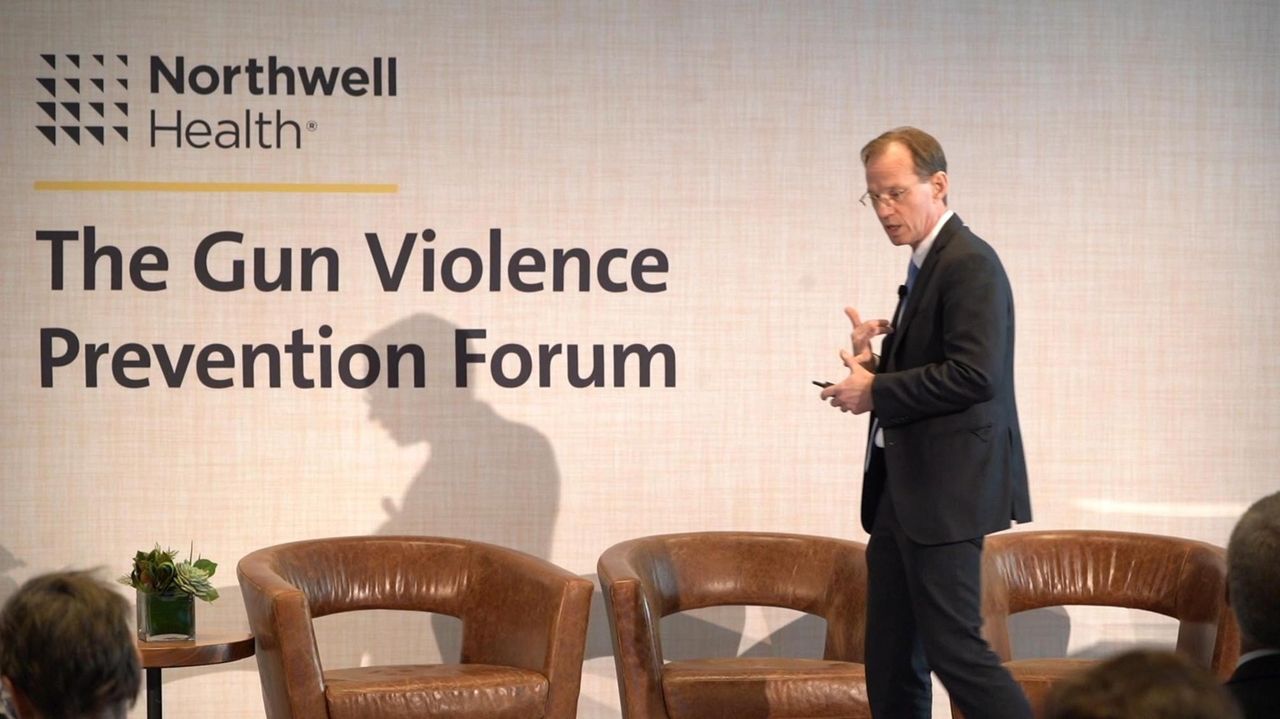 The Northwell Health system on Thursday sponsored a forum designed to examine the issue of firearms through the public-health lens. Co-founder of Survivors Empowered, Sandy Phillips, spoke about the importance of survivors of mass shootings and gun violence getting the support they need.  Credit: Charles Eckert

The most recent suicide note by Marisol Martinez, now a senior at Marjory Stoneman Douglas High in Parkland, Florida, was written a year and nine days ago, she told a forum in Manhattan on Thursday on gun violence.

Ever since Valentine’s Day 2018, when a teenager with an AR-15 semi-automatic rifle killed 17 people at the high school, sparking a renewed national gun debate, Martinez said, she has struggled to cope with the shooting in which her only injuries were mental.

“I lost two friends in the shooting,” she said Thursday. “I’ve been dealing with a lovely little array of mental health issues — particularly PTSD, particularly depression,” adding, “it is strange for me to think that I am alive when 17 people are not.”

Speaking and singing Thursday at the Gun Violence Prevention Forum, Martinez, 18, joined academics, clinicians and health care executives who gathered to discuss ways to reduce the number of people slain or wounded by gunfire.

Martinez rapped and sang “Wake up, America! Wake up!” to a standing ovation.

The Northwell Health system sponsored the forum, which was held at a midtown hotel and organized to examine the issue of firearms through the public-health lens. Northwell spokesman Terry Lynam said there were more than 170 attendees.

Like speakers before and after, Dr. Sheldon Teperman, professor of surgery and director of trauma and critical care services for Jacobi Medical Center in the Bronx, said stricter laws are needed to regulate guns, including universal background checks and a ban on certain kinds of firearms, in order to reduce killings and injuries.

“This is a political problem, I’m sorry. And I know this is an uncomfortable thing for me to say,” said Teperman, who presented a slideshow of the bloody impact of gunshots on the human body, including an image of a dead shooting victim. He added: “Advocacy needs to be number-one on your list.”

There are about 38,000 gun deaths a year, of which about two-thirds are suicides, according to statistics displayed at the forum. About 80 percent of suicide attempts with a gun are “successful,” said Dr. Tom McGinn, deputy physician-in-chief and senior vice president of Northwell. Most people who try to take their own lives by other methods survive, said Dr. Jeff Oestreicher, chairman of Gun Violence Prevention for the New York State American Academy of Pediatrics.

Sandy Phillips, one of the founders of the group Survivors Empowered, said at the forum that some victims live through one mass shooting — only to be in another. One of them was her daughter, Jessica Redfield Ghawi, who survived a shooting in Toronto. Seven weeks later, Phillips said, her daughter was among 12 killed in the 2012 movie theater shooting in Aurora, Colorado.

“Our daughter was hit six times. We know what it did to her body,” Phillips said, describing how the “kill shot” was one that hit her daughter in the head.

At the forum, Michael J. Dowling, Northwell’s president and chief executive, pledged $1 million to gun-violence research, and urged representatives in the audience from other health care systems to do the same. Lynam said the pledge surprised Northwell staff so how the money would be allocated had yet to be determined.

The wording in the forum’s written “Call to Action” — which Dowling encouraged attendees to sign — said that “you can support the Second Amendment — and still have sensible gun laws to provide for public safety.”

Several physicians present noted the public-health approach has been successful — in reducing deaths associated with automobiles, cribs and disease.

The public-health model for guns is not without critics, especially when coupled with advocacy for more restrictions on firearms.

John R. Lott Jr., an economist and author of the book “More Guns, Less Crime,” said in an interview that Northwell’s lineup “is pretty one-sided.”

Lott pointed to a just-published article he co-authored in the libertarian Cato Institute’s Regulation magazine, arguing that “public health researchers are much more supportive of gun control” — red-flag laws, bans on certain weapons or magazines, universal background checks, licensing and registration — “than are either criminologists or economists.”

In another book, “The War on Guns: Arming Yourself Against Gun Control Lies, he wrote of the public-health approach: “There is no mention that widespread gun ownership deters criminals from breaking into homes. There is no mention that gun ownership helps protect residents from harm in the event of a break-in, or that mass public shooters consistently attack gun-free zones where they don’t have to worry about victims being able to defend themselves.”

A 1996 federal law known as the Dickey Amendment bars certain federal research funds from being “used to advocate or promote gun control.” Several attendees Thursday lamented that the law discourages funding for gun-related research. Lynam told Newsday earlier this week that Northwell hopes the event will encourage health care organizations to join to pursue research without the government funding.

An online hashtag connected to Thursday’s event — #ThisIsOurLane — served as a rejoinder to a 2018 tweet from the National Rifle Association critical of the public-health approach to gun violence: “Someone should tell self-important anti-gun doctors to stay in their lane.”

“When somebody gets shot, they don’t call the NRA for help,” Dowling said Thursday to scattered laughter from the audience. “They don’t go to an NRA trauma doctor.”