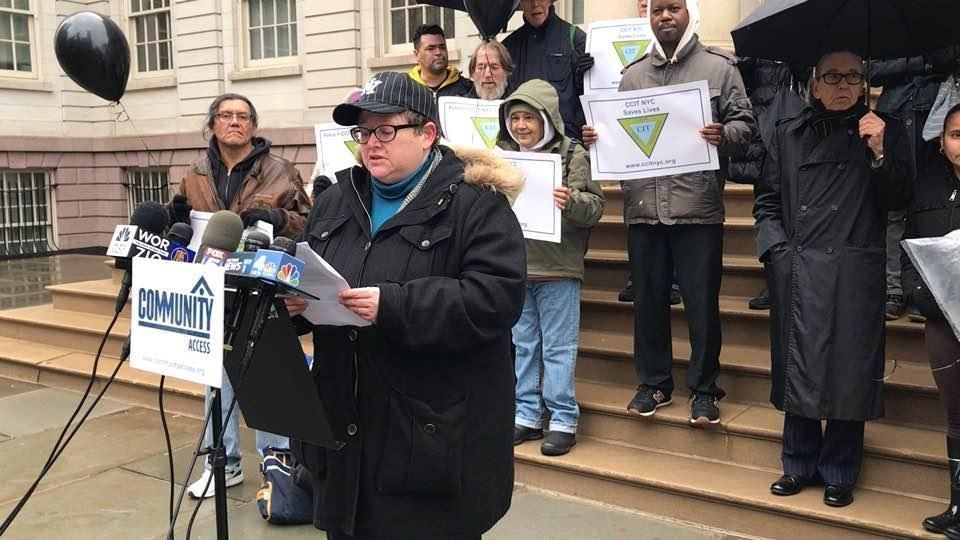 Advocates for the mentally ill popped nine black balloons on the City Hall steps Friday to memorialize emotionally disturbed people killed in confrontations with the NYPD that the advocates say were avoidable.

“You are missed,” Carla Rabinowitz of Community Access, a nonprofit that helps mentally ill people live independently, would say after naming each person and telling their story.

At Friday’s vigil, advocates said they want the NYPD to follow the lead of other municipalities that dispatch experts like social workers, instead of just police officers, to handle calls to the mentally ill, known in police lingo as “EDPs,” or emotionally disturbed persons. The advocates also want the city’s dispatching system changed so only specially trained cops respond to mental-illness cases, as well as other bureaucratic fixes.

“Get the experts in the same room, figure out what’s going on, what’s working, what’s not working, so we can end the senseless violence that is happening to people in crisis,” said Steve Coe, Community Access’ chief executive.

Among the nine lives remembered Friday: Deborah Danner, a 66-year-old mentally ill, bat-wielding woman who was shot dead in 2016 by NYPD Sgt. Hugh Barry. He was recently acquitted after a trial that focused on whether the sergeant was too quick to use deadly force and was adequately trained.

In the aftermath of Danner’s death, the NYPD was criticized from within, by the commissioner, James O’Neill, who said the department had “failed,” and Mayor Bill de Blasio, who said: “Deborah Danner should be alive right now. Period.”

The sergeant’s lawyer said that the cop had no choice but to kill Danner because she was swinging the bat.

The nine people whose names were read Friday were killed between June 2015 and January 2018, and ranged in age from 25 to 67 and had similar stories to Danner’s.

De Blasio spokeswoman Olivia Lapeyrolerie said the city was establishing “a working group to improve the city’s response to EDPs.” She pointed to a task force that met for 100 days and developed two dozen recommendations that are in place or in the process of being implemented.

De Blasio’s wife, Chirlane McCray, has overseen an effort to improve mental healthcare in the city.

She said in December, “I think the NYPD is doing a fantastic job with working with folks who have mental illness.” McCray said the NYPD receives more than 200 calls most days regarding emotionally disturbed persons. She cited the number of officers trained to handle mental illness calls — 7,000 and growing — “which I think has helped tremendously in the way they are able to help people to get to the services that they need.”