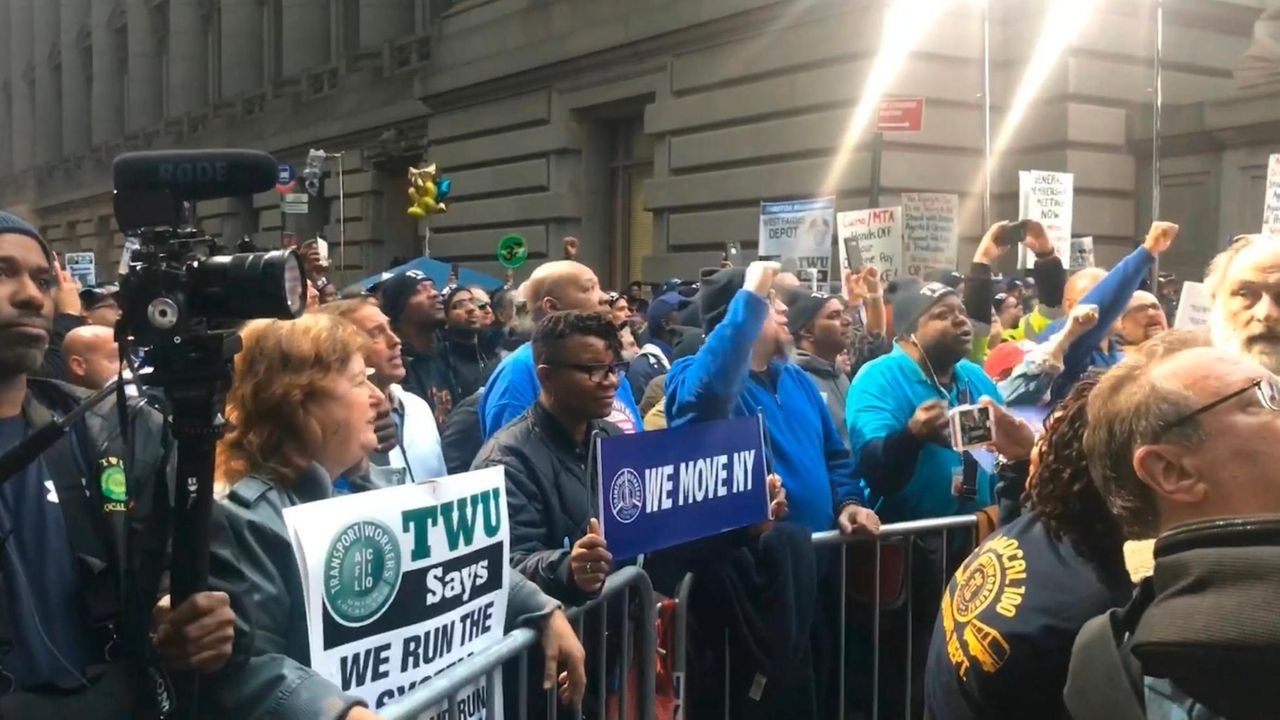 Thousands of subway and bus workers picketed Wednesday outside the Metropolitan Transportation Authority headquarters, escalating a contract dispute between the state-controlled authority and the nation’s largest transport local.

Chanting a barnyard expletive during rush hour in Manhattan, members of Transport Workers Union Local 100 directed ire at MTA chairman and chief executive Pat Foye over an unsettled labor contract that expired May 15. About a half-dozen MTA officers protected the lobby of the headquarters at 2 Broadway.

The pickets, led by union president Tony Utano, jeered an effigy of Foye as “Pat Fraud" from a stage set up in the middle of a street. On stage was a sign with a mock-up of Foye's head photoshopped onto the body of Woody from the “Toy Story” franchise.

In an email from spokesman Pete Donohue, the union criticized the MTA's "insulting" demands, including what it says is a wage freeze and higher health care costs. He said these are "nickel-and-dim[ing] transit workers."

The union represents about 40,000 MTA workers.

Foye has not confirmed that Donohue's descriptions of the MTA's positions are the contract offers, and Foye has said he won’t negotiate in public.

“As Chairman Pat Foye has said on multiple occasions, we are focused on bargaining in good faith with TWU Local 100 and reaching a mutually acceptable contract. Beyond that, we will not negotiate in the press,” MTA Communications Director Tim Minton said in an email Thursday.

The MTA's deficit is expected to grow to almost $1 billion in four years, according to an analysis released last month by the Citizens Budget Commission.

“You don’t have any money? It’s not our damn problem!” Utano shouted from a stage, next to the Bowling Green subway station.

The two sides also disagree over who's at fault for a $418 million increase in overtime last year, with the union blaming the MTA for failing to hire enough workers to fix the system — and the authority faulting unfavorable work rules.

In an email, Nicole Gelinas of the conservative Manhattan Institute, questioned the union’s position in light of the MTA’s deficit, which “makes it highly unrealistic for the TWU to think that it's going to get out of this process without pretty big cost-savings givebacks, hopefully givebacks that they themselves could suggest, based on their knowledge of the system.”

Worker compensation averages about $90,000, she said.

Among the signs at the rally: “You think you hate the MTA? Try working for it!”; “Hell No, Cuomo” — directed at Gov. Andrew M. Cuomo, who controls the MTA; and “DON’T POKE THE BEAR … YOU WILL GET SMACKED,” next to a photo of a hand-in-motion toward Foye’s face.

Utano invoked the specter of a 1966 transit strike that paralyzed New York City.

“Here we go again with a bunch of vicious MTA demands that make 1966 seem tame,” he said.

That work stoppage landed the head of the union in jail.

But it ended in a favorable contract settlement for the union and a fare hike for the public.