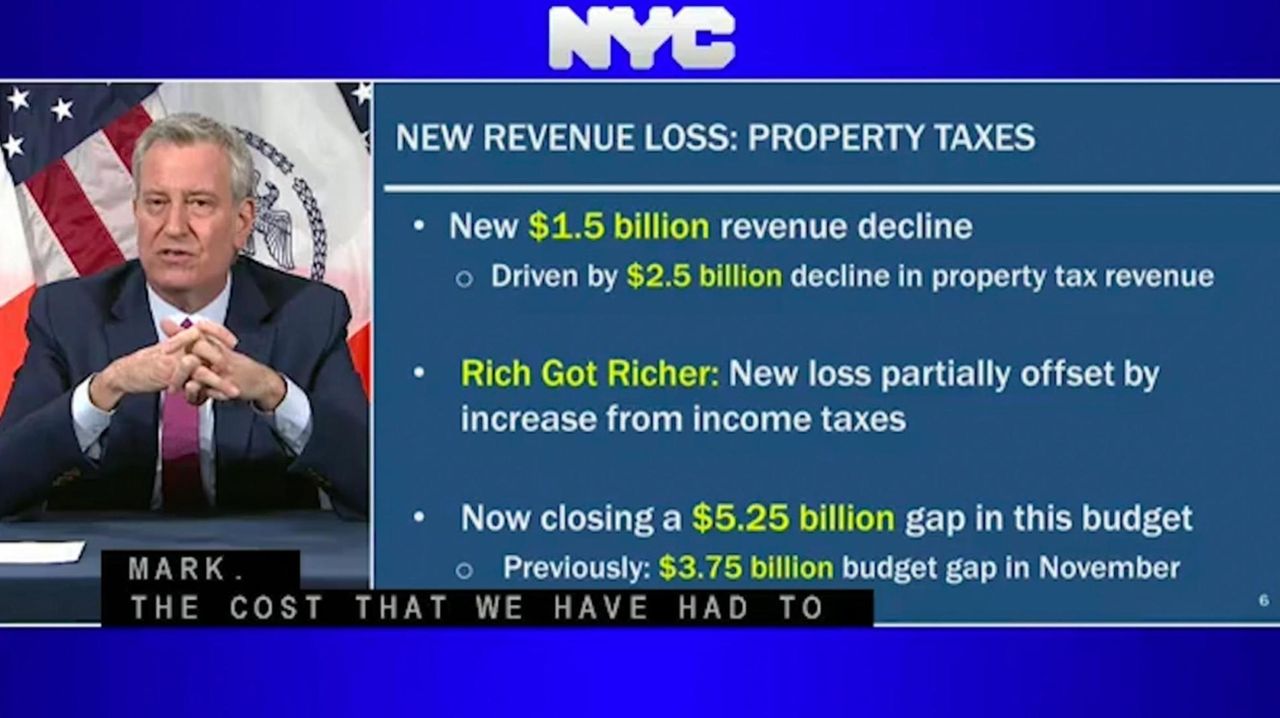 Mayor Bill de Blasio announced on Thursday that tax revenue losses caused by the coronavirus outbreak have continued to climb, $10.5 billion and mounting, but the mayor is hoping federal funds from Washington, D.C., will help offset some of the losses. Credit: NY Mayor's Office

The latest fiscal toll, according to de Blasio: $10.5 billion and mounting, spread over the fiscal years between 2020 and 2022, which starts in July.

De Blasio, a Democrat in his last year as mayor, cited those losses in unveiling a budget for the upcoming fiscal year — totaling $92.28 billion — the first preliminary budget since he took office in 2014 that wasn’t higher, but actually lower, than the year before.

Despite the bleak budgetary outlook, de Blasio cited a silver lining from Washington, D.C., that was going public even as he prepared to detail cuts: U.S. Sen. Chuck Schumer (D-N.Y.) had secured as much as $2 billion for pandemic reimbursements, about $1 billion of which would go to New York City, helping to stanch some of the fiscal bleeding, de Blasio said.

"This is huge," he said, speaking at a virtual news conference from City Hall.

Still, declines in money coming into the city coffers have led to a cut in the municipal workforce’s head count — 7,000 since early last year, with a projected additional reduction of 5,000 positions in the coming fiscal year, at a savings of $349 million. Thousands of Long Islanders work for the city government.

The latest personnel savings come from a 3 to 1 hiring ratio, which means that three positions must be cut for every one that’s filled.

Jobs for emergency workers, such as medics and cops, are exempt from this rule.

"Need continued savings from our labor partners," a slide in the mayor's presentation read.

The city has spent $5.9 billion on COVID-19 expenses, about $1.3 billion of which wasn’t covered under the Trump administration's policies but will be covered under Biden’s.

There are cuts big and small in the budget, including $4.7 million in funding for cultural institutions like museums and theaters, according to a budget official, speaking on a background call with reporters.

What de Blasio unveiled Thursday was an opening offer in negotiations between the mayor and the City Council, talks that last until early summer, when the budget must be finalized, balanced and adopted by July 1 under fiscal controls enacted during the city’s financial crisis of the 1970s.

1:34 Fighting COVID-19: How medical experts have faced the virus
1:13 Advocates step up COVID-19 vaccination efforts in Latino communities
Trump's legal troubles grow even though he's out of office
How to get a COVID-19 vaccine appointment
Four challengers taken off Babylon Village ballots
5:01 Counties add fair housing staff, but no testing program
Didn’t find what you were looking for?