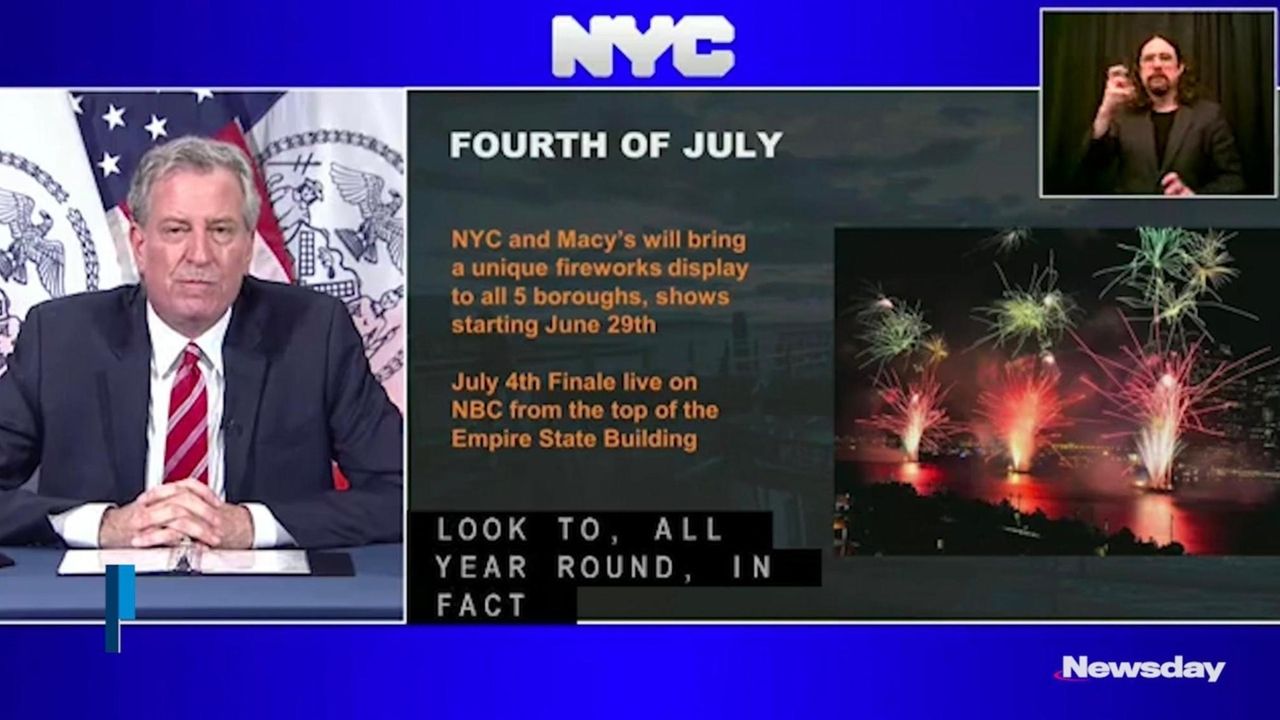 New York City will hold a series of “brief but mighty” fireworks shows next week, culminating with a finale from the top of the Empire State Building on July 4, Mayor Bill de Blasio said Tuesday. Credit: NY Mayor's Office

The rocket’s red glare and bombs bursting in air will be a last-minute secret.

New York City will hold a series of “brief but mighty” fireworks shows next week, culminating with a finale from the top of the Empire State Building on the Fourth of July, Mayor Bill de Blasio said Tuesday.

The shows will start June 29, last about five minutes and be held in unannounced locations in each of the five boroughs, de Blasio said.

Meanwhile, many fireworks shows on Long Island have been scrapped because of the coronavirus pandemic, including the annual Independence Day display at Jones Beach and another show in Freeport.

The Town of Hempstead will light up the sky Saturday after the 7:30 p.m. "drive-in" concert at Town Park in Point Lookout headlined by Mike DelGuidice & Big Shot playing classic tunes from Billy Joel, Elton John, Led Zeppelin and the Beatles. DelGuidice, who grew up in Miller Place, said it would be the band's first live show out of quarantine.

The Town of Oyster Bay is planning to host a fireworks show in the coming weeks, but details are not yet finalized, said spokesman Brian Nevin. The City of Long Beach postponed its fireworks, originally scheduled for July 10, until Sept. 4.

Nassau and Suffolk County said they were not planning any fireworks shows.

In New York City, Macy's small, unannounced fireworks displays will run from June 29 through July 1 and launch from various land and water-based locations, reaching heights of up to 1,000 feet in the air, officials said.

“These past few months have been some of the most difficult in our city’s history, and New Yorkers are looking for a break," de Blasio said.  "This 4th of July celebration with Macy’s will give all New Yorkers a safe and exciting way to enjoy the holiday together, even when we are apart."

Each show should wrap up before crowds can gather at the location.

"In re-imagining this year’s show, the idea of bringing elements to many parts of our hometown resonated with our team and partners in the City of New York,” said Susan Tercero, executive producer of the Macy’s 4th of July fireworks.  “These five-minute surprise displays will showcase Macy’s signature pyrotechnic design and scale, while encouraging spectators to continue following safety and social distancing measures."

The July Fourth finale, which will include performances by top musical acts, a tribute to health care workers and a full presentation of the five borough displays, will be aired live on NBC from 8-10 p.m., de Blasio said.

With Matthew Chayes and John Asbury