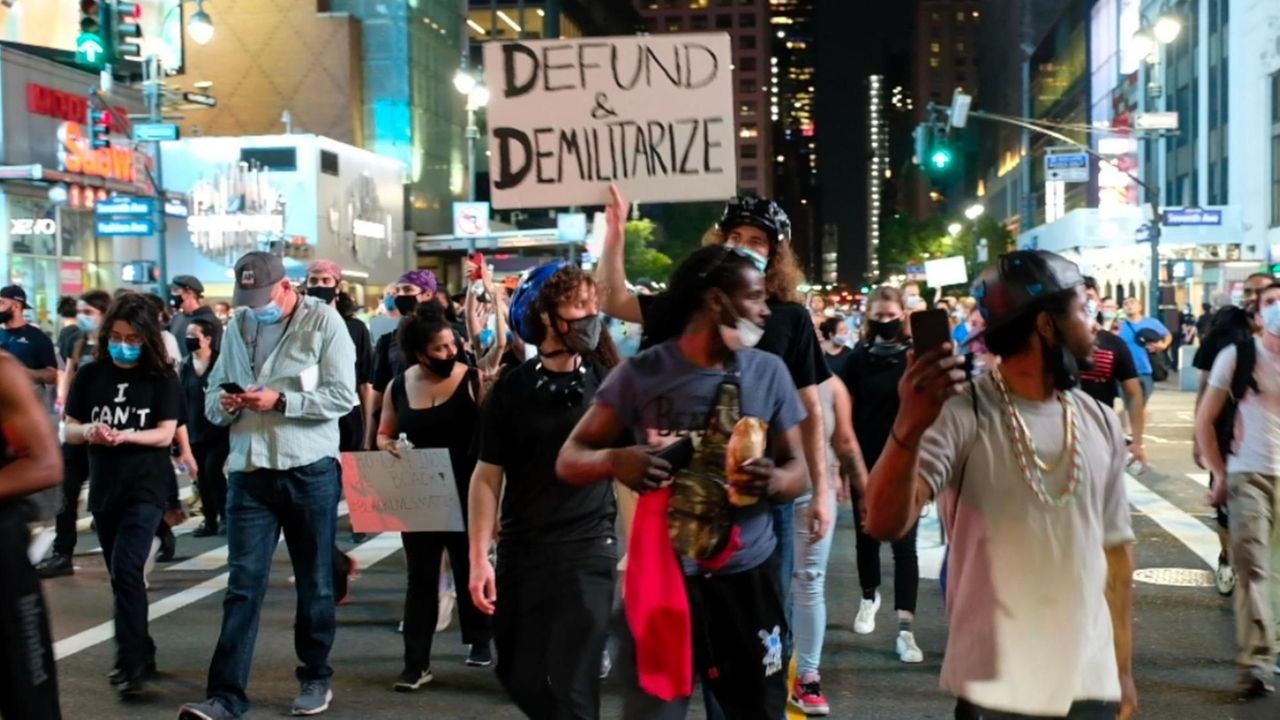 Protesters once again filled New York City's streets after the 8 p.m. curfew Thursday, with sporadic, violent clashes between demonstrators and the police.

The NYPD said there were no initial reports of looting.

More than 200 people were arrested, a slightly higher tally than the day before but lower than the more than nearly 700 arrested during Monday's night protests. The NYPD, cautioning reports still were arriving, could not immediately say Friday morning how many of the individuals arrested were demonstrators protesting the death of George Floyd, who died while in Minneapolis police custody more than a week ago, versus people arrested for non-protest-related offenses.

Several videos posted to Twitter on Thursday night showed police aggressively confronting peaceful protesters — often resulting in arrest — in the Bronx and elsewhere. In other places, police watched but didn't immediately move in, or made orderly arrests without the batons and riot gear of previous nights.

Gov. Andrew M. Cuomo said on Twitter that he was asking state Attorney General Letitia James to investigate the videos as part of her ongoing look into police tactics during the protests.

Shortly after midnight, the mayor tweeted that he had spoken to NYPD Commissioner Dermot Shea after seeing a video of a delivery worker arrested. Food delivery is essential work, de Blasio said, adding in a second tweet that journalists covering protests, too, were essential workers.

It was not clear why the delivery worker was arrested.

Earlier on Thursday, de Blasio and Shea both decried violence targeting police officers amid the ongoing protests across the city.

At a news conference, Shea first displayed videos of NYPD officers in tense and sometimes violent confrontations with demonstrators.

"If you are watching me now … look at those images," a visibly angry Shea said in a live feed of the news conference on his Twitter page. "An officer stabbed in the neck, another hit by a brick. And an officer hit with a fire extinguisher."

Also on Thursday, de Blasio referred to the Wednesday night stabbing of a police officer that led to other officers being injured while on anti-looting patrol as "horrible, painful" and "unprovoked attacks."

“Last night in New York City there were some specific, horrible moments, but there was overwhelming, overwhelming, peace," said de Blasio, who called the attack on the officers "absolutely unacceptable." All three officers are expected to recover.

Meanwhile, protesters continued to gather in Manhattan, Brooklyn and other parts of the city as demonstrations over Floyd's death that had continued throughout the day showed no signs of slowing Thursday night. As in previous nights, marchers continued making their way through city streets well past the 8 p.m. curfew and officers in some cases eventually tried to disperse the protesters and detained some of them.

De Blasio said the city's curfew, which continues through Sunday, and an influx of police officers on the streets, had helped reduce violence and looting in recent days.

Shea, when asked earlier about possible terror links to the Wednesday night attack, said it was too preliminary to say whether there was a connection.

“Those two incidents, unfortunately, as well as others we’ve seen in the last week, are deeply, deeply troubling," Shea said. "All of them are under investigation. The motivations behind them, we are in the preliminary stages of uncovering evidence, creating links and exploring links if there are any. … This is very early in the game, we will have more to say at a point in time when we’re comfortable with the motivation behind any of these incidents.”

A tweet on the FBI account attributed to Assistant Director in Charge William F. Sweeney Jr. read: "Last night's cowardly attack on the NYPD left one officer stabbed and two shot. The FBI New York office is fully engaged. We respond as if one of our own was attacked, and we will use every federal statute available to hold the perpetrator accountable."

"They've treated police officers with such disrespect in New York City," Cuomo said. "I am stunned. This is at a level that is just inappropriate, unconscionable."

The governor urged prosecutors to crack down on looters in the city who on Sunday and Monday nights broke into stores in large numbers. He said looting suspects should be charged with second-degree burglary if they are using pipes, bricks and rocks to commit the act. He also said the suspects should be held on bail.

“You have scenes of looting that are on videotape that are indefensible and inexcusable. Looting is criminal activity, number one,” Cuomo said at his daily briefing. “It would be nonsensical if the police were arresting looters and they were then being arrested and returned to the street the next day to loot again."

Thursday's Floyd demonstrations began with a memorial service attended by thousands in Cadman Plaza Park in Brooklyn. The peaceful crowd then walked across the Brooklyn Bridge to Foley Square in Manhattan.

Just after 6 p.m., a crowd of about 1,500 packed into Union Square. Livestream video from a WNBC news helicopter showed the demonstrators forming rows of a tight circle. In the middle stood several people, some with bullhorns, others with signs, leading the demonstrators in chants.

Nearly 1,000 demonstrators marched, biked, skateboarded and scootered the wrong way down 8th Avenue in Manhattan, with some cars and trucks still in traffic lanes, seven minutes before the curfew was to take effect. Trailing them, as at other city protests, were nearly 100 officers in riot gear carrying batons. At 42nd Street, police officers waiting on bicycles joined the procession of cops.

Near the city's main post office at West 31st Street, one segment of the group began chanting, "I will use my right to peacefully protest."

Farther downtown, in the SoHo shopping district, many entry points to the neighborhood were cordoned off with gates and NYPD cops for at least the third straight night. Earlier in the week the neighborhood sustained widespread looting and thefts, including of luxury products. The 8 p.m. curfew came and went without the police issuing a dispersal order and the marchers continued downtown in defiance of it.

A group of hundreds zigzagged from Hell's Kitchen to Chelsea and onward to midtown and beyond.

Residents in apartments along the way periodically banged pots out their windows in a show of support.

The police forbearance ended at East 60th Street and 5th Avenue. After the marchers had non-violently defied the curfew for more than two hours in front of police, a swarm of more than 500 officers in riot helmets wielding batons began surrounding the protesters shortly after 10 p.m. as they reached 5th Avenue, just north of the Plaza Hotel.

Several of the protesters were pushed to the ground and an officer in a riot helmet held one demonstrator's head to the pavement. Without warning, police pushed several bicyclists to the ground and tried to take other protesters' bikes — and a reporter's. A recording was announcing the 8 p.m. curfew.

Officers detained at least four of the demonstrators. Among them was an organizer who had throughout the night descalated tensions between officers and small numbers of protesters around Manhattan who had tried to provoke the police. It was unclear how many were detained in the 10 p.m. crackdown —  and how many others, if any were allowed to disperse.

In Brooklyn, several thousand protesters marched peacefully Thursday night, cheered on by motorists and onlookers. Some gave out free masks, hand sanitizer and water to marchers. The large, almost jubilant crowd included many parents and children before dark.

Anais Hampton, of Brooklyn, marched with her family.

“I’m out here because I don’t want to become extinct,” she said, holding the hand of her young daughter, who walked at her side. Hampton's son rode on her husband’s shoulders nearby.

“They don’t understand,” she said of her children. “And I hope one day they don’t have to understand.”

It was the second protest for Sebastien Aubourg, 11, of Crown Heights.

“I think it speaks the truth,” he said of the demonstration. “This is what happens when there’s racists.”

His mother, Claudia Aubourg, 39, said she remembers marching in an anti-racist protest with her mother in Brooklyn decades ago.

“I feel ashamed as an American that we still have to do this,” she said.

Protesters gathered at Barclays Center at 8 p.m. in defiance of the curfew.

More than 100 officers wearing helmets and carrying batons looked on as demonstrators chanted for the officers to take a knee. None did.

One Brooklyn couple engaged a cluster of officers in conversation.

“Do you guys personally hold your officers accountable?” asked the woman, Dior Rodriguez, 27.

The couple said they decided to speak to the police officers after seeing dozens concealing their badge numbers with black bands.

Widespread looting earlier in the week led Cuomo to say the NYPD had not been effective after so many stores in the Bronx, Manhattan and Brooklyn were damaged.

He later apologized, and in a Thursday morning interview on Long Island News Radio, said the protests and looting, coupled with the coronavirus pandemic, had created "the most challenging period" for the state. The governor added that he thought the NYPD was capable of preventing looting, but needed to be deployed in greater numbers.

"They know how to do it. It’s a question of the management," Cuomo said. "But they are in an impossible situation. Looters are just exploiting the whole situation. This is the most challenging period in the state."

Huntington schools to dedicate plaque to former educator who 'made learning fun'
Health insurance cost increases jump back to pre-pandemic pace
Seniors Calendar: Events from Oct. 31 to Nov. 7
Way to Go! Student named International Thespian Officer
Way to Go! Student cycles for cancer research
Asking the Clergy: What is All Souls' Day all about?
Didn’t find what you were looking for?