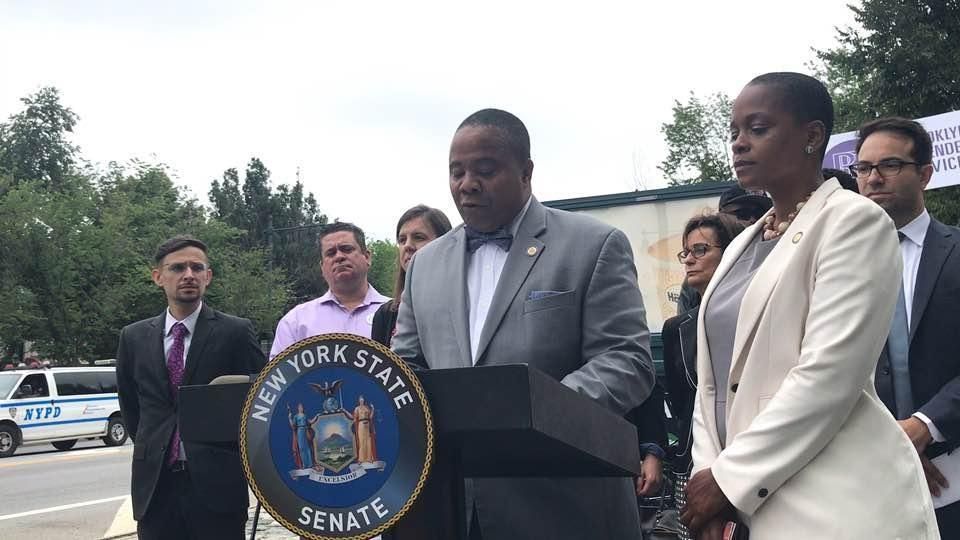 Subway farebeating would be decriminalized and punished only by a civil fine, under legislation introduced in the New York State legislature, two lawmakers said on Tuesday.

Under the proposal, a person who fails to pay the fare — a single ride is $2.75 — would no longer face a misdemeanor arrest for the crime of theft of services, which carries jail time.

“Imagine having a lifelong record for not paying $2.75,” said state Sen. Jesse Hamilton, a lawmaker behind the legislation with Assemblywoman Tremaine Wright, both Democrats.

The current civil fine, the option the NYPD chooses over arrest in about 75 percent of cases, is $100. The legislation would make a fine the punishment in all cases.

Supporters say most people who fail to pay do so because they can’t afford the fare while going about everyday errands such as attending school or traveling to work.

But arresting people for fare evasion is the linchpin of the NYPD’s longtime broken-windows policing philosophy, which focuses on petty offenses and disorder on the belief that doing so prevents major crime.

Mayor Bill de Blasio opposes decriminalization efforts, noting that some farebeaters have been found with open warrants or illegal guns. The majority of people arrested for fare evasion are recidivists, he has said.

“There’s no way in hell anyone should be evading the fare,” he said earlier this summer. “That would create chaos.”

The State Senate bill has been introduced, but the Assembly counterpart hasn’t been yet, said Hamilton spokesman Ean Fullerton. He said his boss would also explore an option to punish fare beaters with community service.

Several jurisdictions, including the Manhattan district attorneys office, have announced they would refuse to prosecute fare evasion, though the NYPD has said it would continue to arrest people for the crime.

The bill’s prospects are uncertain. Nearly all legislation in Albany is controlled by a handful of men, including the governor, the assembly speaker and the Republican-controlled State Senate leader.

“We will review the bill,” Abbey Fashouer, a spokeswoman for Cuomo’s office, said in an email Tuesday night.

But state Sen. Michael Gianaris, a Democrat, said the bill is unlikely to pass given Hamilton’s membership in a power-sharing agreement — the Independent Democratic Conference, or IDC — that keeps Republicans in control of the chamber.

“The senate Republicans have fought tooth and nail against efforts to combat mass incarceration and bring about criminal justice reforms, and I would not expect their approach to this proposal would be any different,” he said.

Hamilton says the IDC is instrumental in passing legislation, such as a bill the past session to raise the age of criminal responsibility, though Democrats say the law could have been even more powerful had Republicans not been in control.

Aaron Manuel of Crown Heights, who passed by the state lawmakers’ news conference in the Brooklyn neighborhood on the legislation, wondered how a person too poor to pay for a fare could afford a fine.