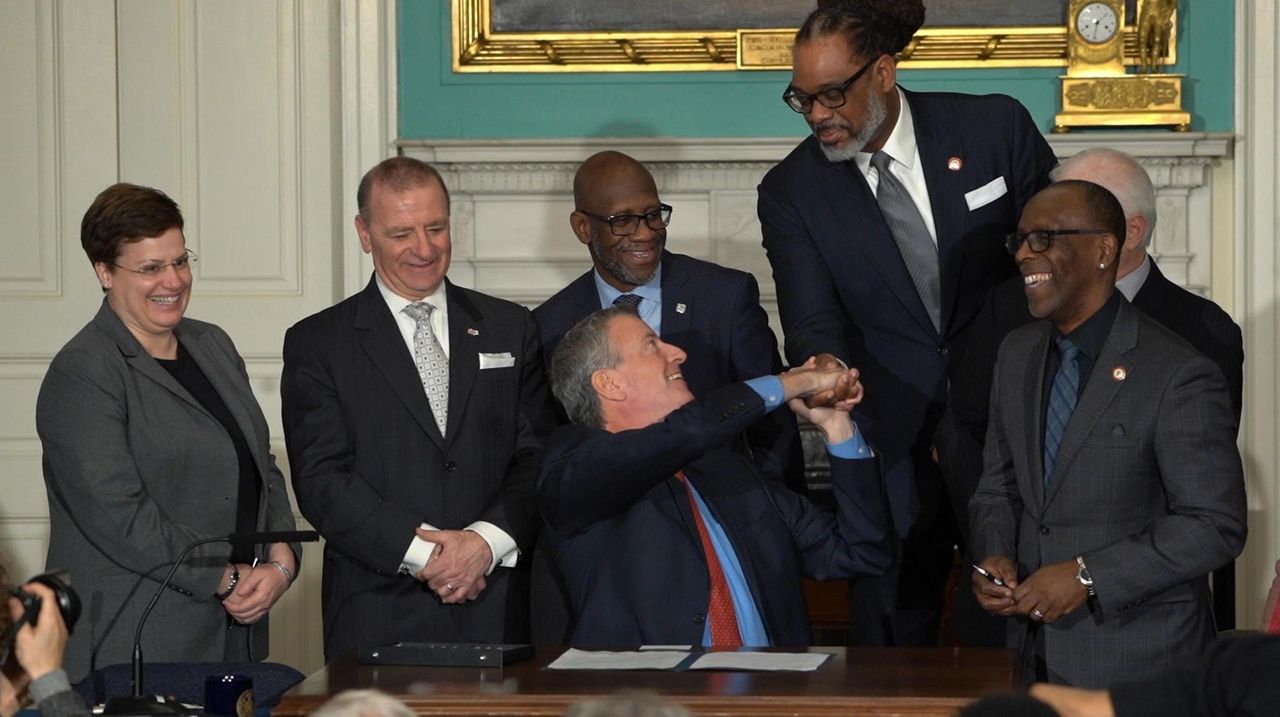 Government-funded health care is being extended to the families of all NYC municipal workers who die in the line of duty or from 9/11-related illnesses. Credit: Charles Eckert

Government-funded health care is being extended to the families of all New York City municipal workers — not just uniformed personnel like cops and firefighters — who die in the line of duty or from 9/11-related illnesses.

“Whether you wore a uniform or not, if you were there for us, we need to be there for you and your family — and we will be,” de Blasio said at a hearing before the signing.

The law takes effect immediately but is prospective, meaning only future medical expenses are covered.

Children of the workers will be eligible for coverage until age 19, or up to age 26 while enrolled in college or university in a full-time undergraduate or graduate program.

The city has so far identified 85 eligible families— and the list could grow to about 5,000, de Blasio said.

The higher number factors in estimates of families of workers who sustained 9/11-related illnesses, said Councilman I. Daneek Miller (D-Queens), a prime sponsor of the legislation, who sat next to the mayor at the hearing and signing.

Thousands of first responders and other personnel who worked at the World Trade Center after the terrorist attacks have developed illnesses, including cancer, that have been connected to airborne toxins unleashed in the debris.

De Blasio gave examples of “unsung heroes” whose families would now would be covered. He cited traffic agents who helped move vehicles near the World Trade Center “in all that chaos” during the time after the 9/11 attacks and sanitation workers as well as city jail guards who worked on the Ground Zero pile and at Fresh Kills, the landfill in Staten Island where debris containing human remains was brought and sorted.

Speaking at the hearing’s public comment portion, Uniformed Sanitationmen's Association president Harry Nespoli said of the legislation: “It’s important — it’s important that all municipal workers be recognized in what they do.”

He added: “I was down on 9/11 that day, and municipal workers were all over the place. Didn’t matter if you had a uniform on or nonuniform. It was, get together and go there and help the City of New York.

Survivorship benefits had been allowed only for the kin of cops and firefighters, and the law de Blasio signed expands this to the rest of the workforce.

In the past, the city would extend benefits to certain nonuniformed workers, but only on an ad hoc basis, requiring special approval, Miller said.

The legislation, passed 46-0 on Jan. 23, is expected to cost about $511,000 in expenditures during the current fiscal year and $1.3 million in the next, according to a fiscal impact statement by the City Council.

On the most recent 9/11 anniversary, Gov. Andrew Cuomo signed legislation granting public-sector workers pension and health benefits who developed a health ailment from work relating to the attacks.