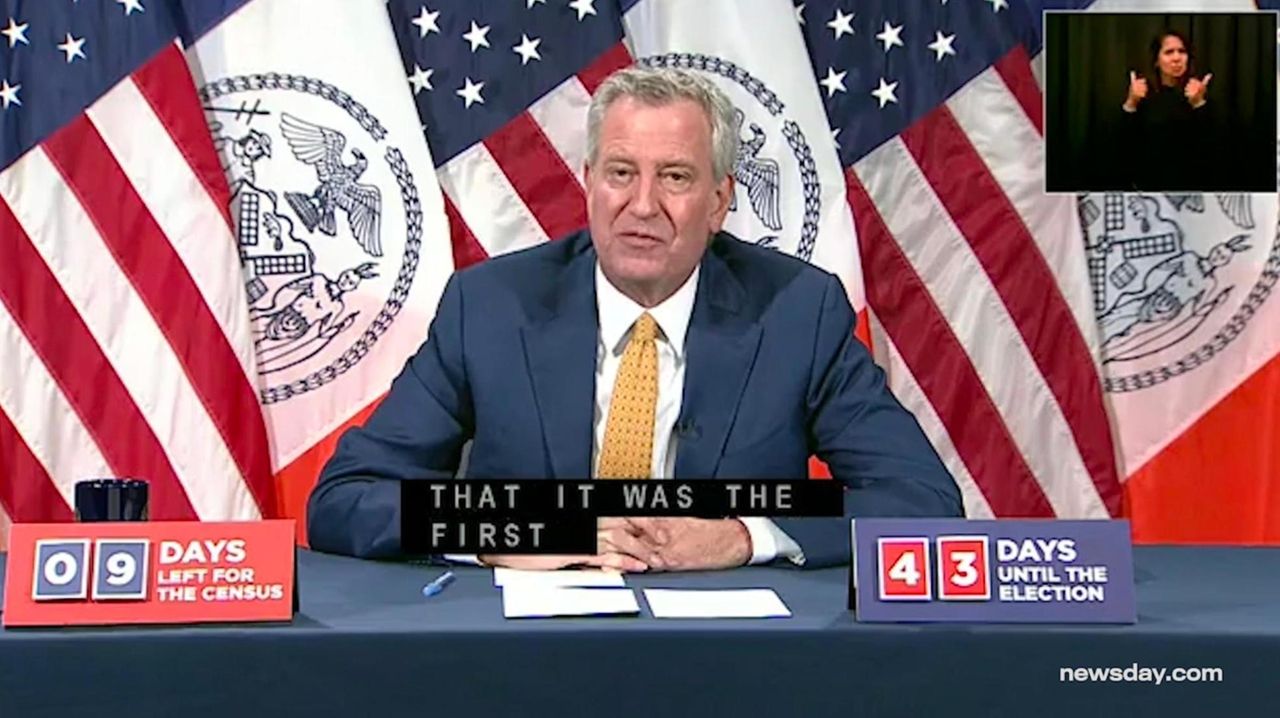 On Monday, Mayor Bill de Blasio said the Department of Justice's designation of New York City as an anarchy zone is another one of President Donald Trump's political games. Credit: NY Mayor's Office

The anarchist jurisdiction list, which also includes Seattle and Portland, was published on the Justice Department’s website Monday in response to Trump’s Sept. 2 memorandum calling for a review of federal funding to communities that have seen violence or vandalism during protests.

"We just got to get real about this guy," de Blasio said during his daily news briefing. "It is always divide and create hatred and move people to vote based on that hatred."

"If they actually do this, we will challenge it legally, and he will lose once again, because we’ve seen this play before," Cuomo warned during a teleconference with reporters, referring to the Trump administration’s efforts to crack down on sanctuary cities. Cuomo said the 10th Amendment of the Constitution assures the state that it has control of that funding.

"He turns his attention to urban areas which he wants to associate with people of color and in another way, of course, he wants to associate with Democrats and progressives," de Blasio added. "He treats them as the ‘other.’ He tries to convince a lot of people in this country that we all are the problem and he will save his voters from all of us. No president in history has been this irresponsible and divisive. But it is the only trick he knows."

Trump’s memo instructed U.S. Attorney General Bill Barr and other officials to identify jurisdictions the administration claims have failed to take measures to prevent violence and the destruction of property during the anti-police brutality protests that have roiled the nation since George Floyd’s death on May 25 while in the custody of Minneapolis police.

"When state and local leaders impede their own law enforcement officers and agencies from doing their jobs, it endangers innocent citizens who deserve to be protected, including those who are trying to peacefully assemble and protest," Barr said. "We cannot allow federal tax dollars to be wasted when the safety of the citizenry hangs in the balance. It is my hope that the cities identified by the Department of Justice today will reverse course and become serious about performing the basic function of government and start protecting their own citizens."

De Blasio said the Trump administration’s portrayal of New York City as a lawless community is simply an attempt to provoke anger and hatred among his supporters.

"This is just another one of President Trump’s games," de Blasio said. "It is thoroughly political, it is part of his campaign strategy. It makes no sense. It is not based in the facts in the least. It is insulting to the people of New York City and his effort to withhold our funding is unconstitutional."

New York City Corporation Counsel Jim Johnson said Congress, and not the president, controls the federal government’s purse strings and that Trump does not have the authority to withhold funds from the city. He said the city is prepared to fight defunding in court if necessary.

"Not only is it unconstitutional, but the designation of anarchy does not even pass the common sense test … what we have in New York is not anarchy. What we have is a city moving forward under difficult circumstances made more difficult by the threats to withdraw federal funding," Johnson said.

"I saw peace, tranquility. I saw people going about their business, people excited about the first day of school, I saw anything but anarchy," de Blasio said.