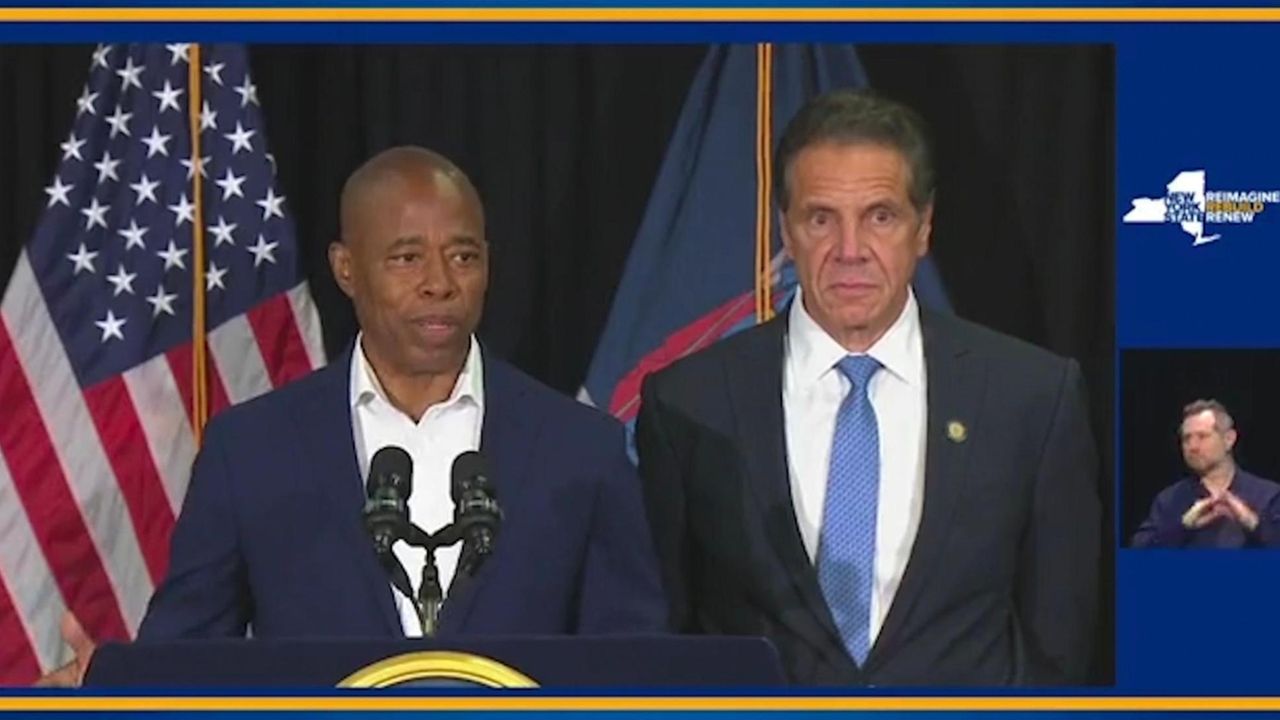 New York City is suffering through a "pandemic of violence," Democratic mayoral nominee Eric Adams said Wednesday, calling for judges to set bail more often for those accused of violent crimes, stricter enforcement of existing laws, and a "look" at "unintended consequences" of recent legislative changes to the state's criminal justice system.

Appearing in Brooklyn Wednesday morning with Gov. Andrew M. Cuomo, Adams likened the city to others where, he suggested, disorder is on the rise.

"We’re watching in San Francisco, their most affluent communities turning into a shanty town. In Portland, you have a city within a city where the police are not allowed to go into. Right here, here in New York, you’re seeing the same thing," said Adams, a retired NYPD captain, and now Brooklyn’s borough president. He also said: "I stood on the street corners and protected the children and families of the city. My son won't grow up in the city that I grew up in. That is not going to happen."

He added: "There’s just a sense that we have a city, where any and everything goes."

While overall major crime is down 0.76%, comparing year-to-date 2020 to 2021, under the most recent crime statistics released by the NYPD, homicides are up, and the number of shooting victims has risen by 22.2%, and shooting incidents by 28.9% over that period. And there has been a 105% increase over two years. There has been an increase in such crime in other parts of the United States, too.

Adams and Cuomo appeared together at a news conference at Lenox Road Baptist Church in Brooklyn’s Prospect Lefferts Gardens neighborhood, where Cuomo promoted a new program aimed at reducing gun violence. The program funds new summer jobs for youth, career jobs, such as for tradesmen, carpenters, electricians and social services, as well as "violence interrupters," a program that dispatches reformed gang members onto the streets to tamp down beefs and into hospitals to urge shooting victims and allies not to retaliate.

Similar programs have been proposed and enacted by Mayor Bill de Blasio, who has also said the NYPD is setting an ever-increasing number of records relating to gun arrests.

Adams said the city needs to exercise "intervention and prevention" and he does not want "heavy-handed policing."

But he said he is alarmed about the crime increase, particularly affecting young victims and young perpetrators.

"There is a lack of fear of being caught with a gun," Adams said. "This is very dangerous. And we need to connect the dots."

He pointed to recent changes by Albany such as "Raise the Age" legislation, which changed the law so that those as young as 16 would not automatically be tried as adults. The state was only one of two or three to have had such a law.

"Yes, we need to look at all of these new laws that are taking place," he said, to make sure they "don’t have unintended consequences based on how we enact them."

He also criticized criminal court judges, who can set bail but are not doing so as much as he’d like for certain crimes, under legislative changes meant to avoid innocent-until-proven-guilty arrestees from languishing in jail.

"Our judges are not giving bail on cases where they are allowed to give bail," he said.

He added: "We have thrown up our hands, and we have surrendered our city. It’s time for us to ensure our city is for the working class, everyday people who are following the laws, and say that the government is going to make sure we protect them."

It’s not just for violent crime where Adams said the law needs to be more strictly enforced.

As for dirt bikes and other illegal road activity that make noise and cause disorder on the street, Adams said: "We’re going to enforce the laws in our city."

Report: Thousands of MTA employees don't use time clocks designed to prevent fraud
These restaurants, employers, colleges and NYC theaters will be requiring COVID-19 vaccines
1:36
LI group works for health, racial and gender equity
Four LI hospitals ranked among Top 50 in U.S. in medical specialties
Educator plans lawsuit, says he was reassigned for 'outspokenness' over book
Two turntables and a microphone made Biz Markie a legend
Didn’t find what you were looking for?