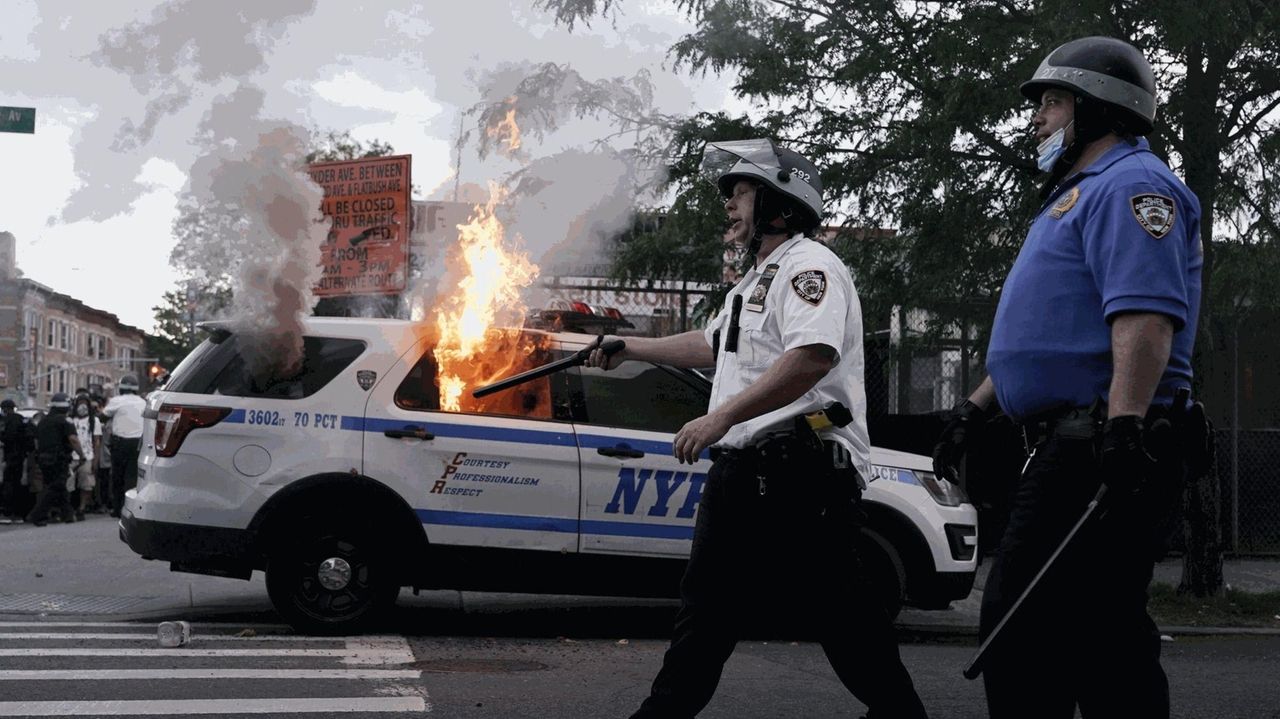 NYC protests over a black man's death at the hands of a Minneapolis cop continued overnight and into Sunday. Credit: Newsday / Matthew Chayes

Gov. Andrew M. Cuomo and New York City Mayor Bill de Blasio Sunday promised a speedy probe into the actions of protesters and police following weekend demonstrations in the city over the killing of an unarmed black man in Minneapolis by a white officer.

Sunday evening, thousands poured through Manhattan and Brooklyn for a fourth night of protests as the NYPD lined the streets and police helicopters flew overhead. While the demonstrations appeared orderly early in the evening — there were just two arrests as of 10 p.m. — small fires, looting and skirmishes with police took place as the night wore on.

Thousands of cops massed before midnight in front of Brooklyn’s Barclays Center, most in riot helmets and wielding batons, shortly after a skirmish with protesters across the street near a Target store. At times, officers charged at the group, swinging batons as the protesters tried to flee over benches.

Hundreds of the marchers then headed towards Fort Greene chanting Floyd’s name.

The weekend protesters included Chiara de Blasio, 25, the mayor's daughter, who was arrested Saturday night during a Manhattan protest, according to multiple media reports.

She was taken into custody near Union Square, at 12th Street and Broadway, around 10:30 p.m. She was part of a group throwing objects at officers but did not throw anything at police herself, the reports said, and refused to leave when ordered to do so. She was given an desk appearance ticket charging her with unlawful assembly and released.

The union for NYPD sergeants tweeted her arrest file.

Saturday night, thousands of people had taken to city streets for a protest that was initially peaceful, but the mayor blamed a small contingent for the destruction that accompanied the protests, including burned police vehicles, looting, smashed bank windows and extensive vandalism. Dozens of people were arrested and injured in the clashes, as similar violence erupted in cities across the country.

“We honor the tradition of civil disobedience,” de Blasio said at a Sunday morning news conference.

But, the mayor said: “Folks who come to incite violence, we won’t accept that."

Cuomo weighed in on the city violence during his Sunday briefing on the coronavirus in an emotional plea to police and demonstrators.

He described Saturday night as “a long and ugly night all across this nation."

“People are outraged and I understand that,” he said.

Cuomo noted he has asked state Attorney General Letitia James to review police conduct and deliver a report in 30 days.

“When you are violent, it creates a scapegoat to shift the blame,” Cuomo said, adding that it “allows the President of the United States to tweet about looting rather than murder by a police officer. It allows the federal government to politicize what’s going on."

A top NYPD intelligence official said Sunday that there was abundant evidence that anarchist groups made detailed plans and preparations to make the protests in New York violent, going as far as to stockpile gasoline and other flammable substances and had medics available to help the injured.

In a briefing with reporters, Deputy Commissioner John Miller said that police intelligence operations, operating under long-standing court instructions laid down over the years, found evidence of the advance preparation, which included the use by the anarchists of advance scouts.

Miller also said that out of 786 arrests during last week’s demonstration, one out of seven defendants were from out of state. Defendants arrested on various charges came from Texas, New Jersey, Pennyslania, Iowa, Minnesota, Virginia and other states.

“Taken together,” said Miller, the preparations were “a strong indication they [anarchists] intended to carry with disorder, property damages and violence against police before the first demonstrations and before the first arrests.”

But protesters interviewed Sunday said they were there because they felt the need to speak out against Floyd's death. One protester, Bryce Stewart, a native Texan now living in Brooklyn, helped carry a banner that said, "No justice, no peace, no racist police."

Stewart said he had come out to stand with "my fellow humans" who had been abused by police. Asked about the conduct of police and protesters, Stewart said: "I think that everyone is acting on edge … you're going to see people cross the lines a couple of times but ultimately we are going to get to a place, a resolution, that favors black lives."

Another marcher who gave his name as Papa said he was from Senegal but was living in Brooklyn. "I am here to support my local community … this has happened over and over and over. Taking action is the best way to speak out against something."

Asked about the conduct of the NYPD, he said aside from "a couple of incidents" on prior nights that he was not protesting, "So far, everything has been very calm. I understand they are doing their job."

One group of demonstrators set up a table at the edge of the protest, offering free pizzas, water, masks, snacks and fruit.

Laurence Hilsman of Gowanus said: “I thought people could use a little happiness. Pizza makes people happy.” He said the group gave away 25 pies.

One marcher told police: "Join us, don’t oppose us. Take off your weapons and kneel with us.”

Around the city, there were gestures from police officers intended to show sympathy or respect with marchers. A few officers clapped along with protesters in Manhattan. In Queens, uniformed officers took a knee with protesters in a Queens intersection as an organizer called out the names of men and women who have died at the hands of police.

Earlier Sunday, NYPD Commissioner Dermot Shea, standing alongside de Blasio, praised the “restraint” of the city’s police department in responding to the protests Saturday, but he expressed concern about certain incidents caught on video, including one showing a police sport utility vehicle in Park Slope lurching into a crowd of protesters throwing bottles and other items at the car as they blocked its path.

“We saw tremendous restraint overall from the NYPD,” he said. “I also saw things that need to be done better.”

The protests were sparked by the killing of George Floyd, 46, a Minneapolis man who died Monday after a white police officer there knelt on his neck for nearly eight minutes. Video of Floyd's death spurred widespread, sometimes violent demonstrations in cities nationwide that showed few signs of letting up Sunday, despite the threat posed by the COVID-19 pandemic.

In the video, Floyd is heard repeatedly saying he cannot breathe as Minneapolis police Officer Derek Chauvin kneels on Floyd's neck. Chauvin has since been arrested and charged with third-degree murder.

A total of 47 NYPD vehicles sustained damage during Saturday's protests and officers made 345 arrests, said Freddi Goldstein, a spokeswoman for de Blasio. Thirty-three uniformed cops were injured in the melees, she said.

One protester, Samantha Shader of upstate Catskill, is being prosecuted federally and was charged with attempted murder after a Molotov cocktail was thrown into an occupied, marked police vehicle, police said.

Her sister Darian Shader was released after being charged in state court with attempted assault, disorderly conduct and other offenses for allegedly interfering with her sister's arrest, according to the court complaint.

De Blasio said he would appoint James Johnson, the city’s corporation counsel, and Margaret Garnett, commissioner of the Department of Investigation, to conduct an independent review of the protests.

The New York City Civilian Complaint Review Board, an independent agency that investigates abuse complaints against the NYPD, said in a tweet Sunday that they are "aware of numerous allegations of police misconduct from this weekend and will be investigating all complaints thoroughly and impartially."

Shea said he welcomed any outside review of his department.

“This is not an infallible agency. We make mistakes. But we have to own mistakes. And we are committed to it.”

But the mayor said the Park Slope incident escalated only because of the crowd’s actions toward the officers.

The governor urged people to use the moment to press for specific legislative changes such as requiring allegations of police misconduct to be investigated independently rather than by a local district attorney.

When asked about the NYPD's response to the protesters, the governor said police officers "are in an impossible situation in many ways."

"But their behavior is everything, and I’ve seen those videos and those videos are truly disturbing, and some of the videos frankly are inexplicable to me,” he said.

Another widely shared video from Saturday's protests shows a police officer pulling down the mask of a protester who is standing with his hands in the air to spray him in the face with pepper spray.

Cuomo added that there was a link between the protests and the COVID-19 pandemic.

"For 90 days we were just dealing with the COVID crisis. On the 91st day, we had the COVID crisis and we have the situation in Minneapolis with the racial unrest around the George Floyd death. Those are not disconnected situations.

"One looks like a public health system issue — COVID — but it is getting at the inequality in health care also on a deeper level. And then the George Floyd situation, which gets at the inequality and discrimination in the criminal justice system. They are connected," the governor said.