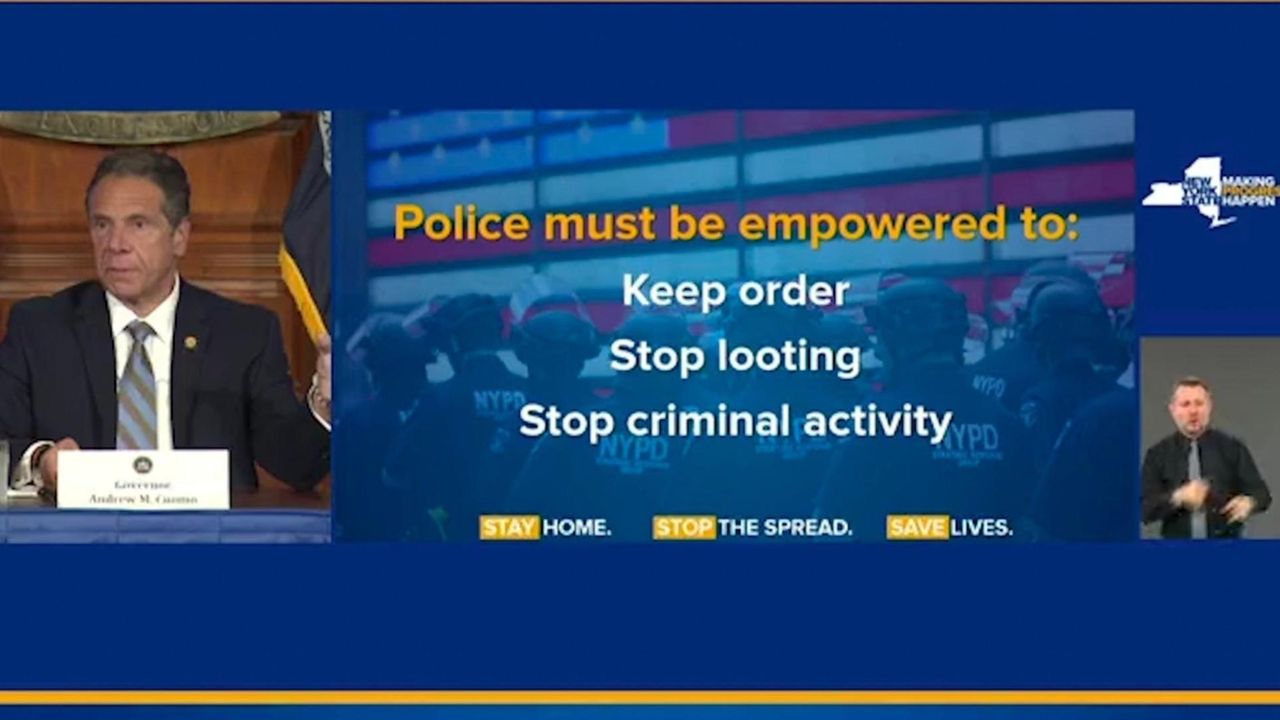 Gov. Andrew M. Cuomo confirmed during his Wednesday morning news briefing that he spoke to NYPD Commissioner Dermot Shea to apologize for comments Tuesday blaming the NYPD for failing to stop looting at scores of businesses across the city.  Credit: NY Governor's Office

This story was reported by Matthew Chayes, Anthony M. DeStefano, Nicole Fuller and Bart Jones. It was written by Fuller.

Chief of Department Terence Monahan spoke about the governor during an interview Wednesday morning on the "Today" show after a relatively peaceful Tuesday night in New York City. Protesters were back on city streets Wednesday night, like 24 hours before, ignoring an 8 p.m. curfew. Some engaged in tense confrontations with police officers. Numerous demonstrators were detained and handcuffed.

In his "Today" show interview, Monahan defended his cops and talked about the governor's contrition.

"Don't ever call them ineffective," Monahan said. "As a matter of fact, last night, [Cuomo's] office called and apologized to me. I know he called the commissioner directly to apologize, that that's not what he meant, that he did not mean to put down the police officers."

Cuomo said local and state police across the state had done a good job Tuesday night.

The governor had criticized Mayor Bill de Blasio and the NYPD Tuesday for failing to stop the looting of stores and businesses — several in some of Manhattan's high-end shopping areas — before later clarifying his remarks through an aide. Cuomo also said de Blasio had refused his offer of deploying the National Guard to keep the peace, and de Blasio criticized the governor's comments — the latest episode in the long-running feud between the two Democratic politicians.

De Blasio, who earlier announced his extension of a citywide 8 p.m. curfew through Sunday, defended his and the NYPD's actions in an interview Tuesday night on 1010 WINS and called Cuomo's comments "inappropriate."

The latest dust-up between Cuomo and de Blasio took place before Tuesday night's protests led NYPD officers to arrest about 280 people as the earlier curfew, restrictions on car traffic and an increased police presence appeared to quell widespread looting.

About 90 minutes after Wednesday night's curfew, large groups of protesters were out in force for a seventh night. As the sun began to set, demonstrators appeared to be making their way peacefully through the streets of Brooklyn and Manhattan.

But cops in some areas took a more aggressive stance with protesters once night fell.

Near the corner of 3rd and 57th Street at about 9:30 p.m., dozens of police officers, clad in body armor and on bicycles, suddenly approached a crowd of several hundred demonstrators. As they advanced, officers chanted "move back!" A woman in the group of to the side appeared to have an altercation with one of the officers, and it was unclear what she may have done. She was grabbed by the hair and pushed to the ground.

One officer threatened to arrest a news reporter filming. High above in luxury apartment buildings nearby, resident peered out their windows and jeered the officers.

Cops eventually brought the woman to her feet and placed her in plastic handcuffs as she demanded a cop's shield number. He did not answer.

Farther south, near 54th Street, nearly 50 officers detained dozens of people. Some of those detained sat in a gutter, others were lined up against storefront offices and under a building awning. Heavy rain began to fall and those in the gutter were moved under an awning.

A video posted on Twitter showed a tense standoff unfold Wednesday night between a phalanx of cops in riot helmets and hundreds of demonstrators blocked from entering Cadman Plaza Park. Demonstrators urged others among them to "stand your ground" as cops, only feet away, remained motionless and mostly silent.

Hundreds of cops, most in riot helmets, stood in columns on Tillery Street between the roadways leading to the Brooklyn and Manhattan bridges.

Near the Plaza hotel in Manhattan and a boarded up Apple store, cops in two unmarked police vehicles jumped out and cornered young men who were biking on Central Park South.

“Go home!” one of the cops shouted, threatening the pair with arrest.

“We’re going home!” they said before biking away.

As they walked, protesters called out the familiar chant, “Black Lives Matter!”

Just before 8 p.m., NYPD vehicles began blasting a recording warning that a curfew was in effect, and only essential workers and vehicles were allowed on city streets.

At Fifth Avenue and Bergen Street in Manhattan, a couple handed out free water from the hood of their car. Trailing the demonstration was a procession of police vehicles, lights flashing, including an NYPD SUV with its windows taped, each with an “X” — presumably in case of shattering.

Amid the protests over Floyd's death, the ongoing COVID-19 pandemic was not forgotten Wednesday night.

At 7 p.m., about 150 people gathered in circles at Queensbridge Park and clapped to honor essential workers and recognize the more than 100,000 people who have lost their lives to the coronavirus.

“We wanted to stand side-by-side to honor victims of structural racism and spend time together in solidarity, reflection and healing,” said Aafia Chaudhry, who helped organize the vigil through the group, LIC Support.

“Last night, we took a step forward in moving out of this difficult period we’ve had in the last few days,” de Blasio said Wednesday morning. “We saw a very, very different picture around New York City last night. We still have more work to do, let me affirm that up front. … But overwhelmingly it was a very different reality in New York City last night."

The governor echoed the sentiment later in the day.

“New York City last night was much better,” Cuomo said. “The protesters were mainly peaceful. The police officers had the resources and capacity to do their jobs. The results last night were much, much better than the night before.”

The governor — in a blistering attack on President Donald Trump for posing with a Bible earlier this week — read passages from Scripture about sowing peace and not discord amid the growing civil unrest and coronavirus crises faced by the state and the nation.

“The president held up the Bible the other day in Washington, D.C. Here in New York, we actually read the Bible, and there are some passages that I think are especially appropriate for today,” said Cuomo, during a daily coronavirus briefing that has grown to include commentary on the protests and looting over the last 10 days.

Holding up his own Bible, Cuomo read a verse from the Book of Matthew: "Blessed are the peacemakers, for they will be called children of God."

Then he read from the Book of Mark: "If a house be divided against itself, that house cannot stand."

"Turn away from evil and do good," he read from Psalms. "Search for peace and work to maintain it."

Another passage from the Book of James also touched on the calls for justice heard in the streets of New York and other states across the land: "The seed whose fruit is righteousness is sown in peace by those who make peace."

Cuomo's biting critique was triggered by Trump's decision to appear for a photo op on Monday in front of St. John's Church near the White House. White House officials ordered the Secret Service, federal officers and the National Guard to clear Lafayette Square of hundreds of peaceful protesters, using tear gas, batons and shields to push them out of the iconic park.

The move has provoked widespread controversy.

At a Wednesday afternoon update, the NYPD said looters had challenged officers with their tactics, such as changing license plates of vehicles to thwart investigations and causing diversionary disturbances to draw away cops so that they could loot. Since last Thursday, there have 2,000 arrests, and by Tuesday some 500 burglary arrests, mostly in Manhattan, the police said.

The NYPD did not immediately have updated arrest numbers for Wednesday.

The mayor said Soho and the Bronx, which were overcome by widespread looting Monday night, “did not see that kind of activity in any meaningful numbers [Tuesday] night.”

“The earlier curfew really helped out," Monahan said during his "Today" show interview. "Cops take out of the neighborhood people that didn't belong there. [The curfew] helped a lot. A lot of peaceful protesters. Protesters that were still protesting past 8 peacefully, we allowed to continue, but when a group of people who were looking to cause mayhem broke off, we were able to take care of them very quickly."