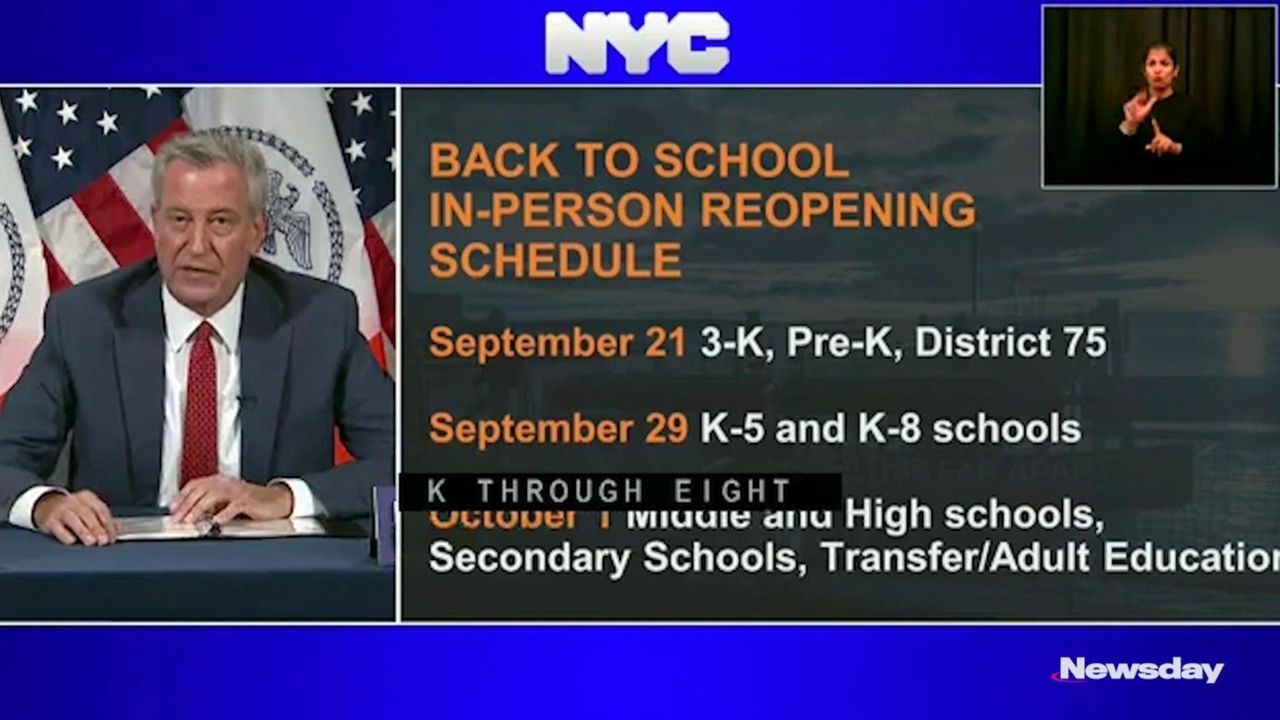 The physical reopening of New York City’s public school system is again being delayed — to as late as Oct. 1 — as the nation’s biggest school system struggles to restart during the coronavirus pandemic, Mayor Bill de Blasio said Thursday.

Announced just days before classrooms for all grades were to open for the first time since March, the plan keeps most buildings closed to students for at least eight more days: Sept. 29 for the reopening of kindergarten through fifth grade and K-8 schools, and Oct. 1 for middle schools and high schools. Only 3-K, prekindergarten sites and special-education schools are to open on Monday as planned.

"It’s the hard way, but it’s the right way," de Blasio said at his daily coronavirus news briefing, explaining that there isn’t now enough staff to fully reopen yet.

When asked whether he would rule out further delays, the mayor said: "We could always learn something new that might cause additional adjustment."

As part of his agreement hammered out a day earlier with the labor unions representing teachers and principals, the schools would be staffed with an additional 4,500 teaching personnel, drawn from the ranks of substitute teachers, graduate students and others.

The added personnel — 2,500 more announced Thursday on top of the 2,000 already planned to be brought in — are necessary because, due to social distracting requirements, each classroom can hold only a fraction of normal class size.

In opening, the city public schools are planning to take a "blended" approach to educating 1.1 million students — a mix of in-person and online/remote learning.

Families can opt for all-remote learning. But even for those who choose to send students in person, most will be in school buildings only two or three days a week — due to the need to have fewer students in each classroom and limitations on staffing and classroom space — with the balance done online.

Thursday’s announcement left Daniele DiChiara, a middle school teacher in Queens, scrambling to prepare to begin the school year remotely instead of in person.

"Overall we are very happy that safety is the number one concern," she said of colleagues and herself. "But now we are all thrown an additional wrench of figuring out how we are going full remote."

DiChiara, of East Rockaway, said she had suspected a last-minute change of plans might happen.

"We were having a very serious staffing issue inside our building," she said. "So we didn’t know how school was going to work on Monday."

DiChiara, who teaches sixth grade math and science, said she wishes the city had implemented distance learning to begin the semester earlier this month.

"We’re 10 days behind now," she said. "This decision should’ve been made sooner."

Asked what prompted the city to delay the reopening, yet again, de Blasio cited a meeting with union leaders — the same ones who have been seeking additional staffing for weeks, even as de Blasio said the prior staffing levels were sufficient.

"Sometimes you have to put the right people in the room," de Blasio said.

Alka Nair, a parent of two children in New York City schools, said the mayor’s announcement was disappointing but understandable.

Although her son will begin prekindergarten on Monday as planned, her daughter’s return to in-person instruction for fourth grade will be pushed back a week.

"If they need the extra time to do whatever it is that they need, more than the six months or seven months they’ve had, so be it," she said. "It is what it is. This is 2020. Nothing has been going right."

Deborah Alexander, a parent of two New York City students and the president of her local Community Education Council, criticized both the city and the United Federation of Teachers for its handling of school reopenings.

"Nobody believes that a week delay will solve the myriad problems that exist in this makeshift plan," said Alexander, who grew up in Wantagh and Commack and now lives in Queens. "As much as every single parent would love their kids in school full time, this is not the way to do it."

The schools have been closed since mid-March as the pandemic began to hit New York State.

Mark Cannizzaro, president of the Council of Supervisors and Administrators, the union that represents principals, said that some buildings were understaffed and lacked needed safety equipment.

It’s the second time de Blasio has delayed the reopening of the schools. The schools were set to reopen on Monday, after being delayed from Sept. 10.

Asked by different reporters whether he’d promise school parents that there wouldn’t be another postponement, he said: "I think they understand we are going through a pandemic. They understand that everyone is working nonstop trying to fix these really complex problems, and I know they will find a way forward. They always do. We make a move here of a few days to get it right."

He added: "It’s never easy. I do sympathize, and I do feel for any parent who has to make new arrangements for a few days, come up with something new. It’s always hard."

Cannizzaro said that the additional staffing announced Thursday was sufficient — but only for the reopening of the younger classes.

Experts predict COVID-19 will be around for years to come
Report: NYPD officers didn't racially profile people when enforcing COVID-19 rules
1:34
Pandemic-fed slowdowns limit what's for lunch at school
Fauci: Pfizer COVID-19 vaccine could be available for children in early Nov.
0:25
Cops: Coram woman found on her lawn with fatal stab wounds
A magical trove of Ricky Jay ephemera hits auction block
Didn’t find what you were looking for?