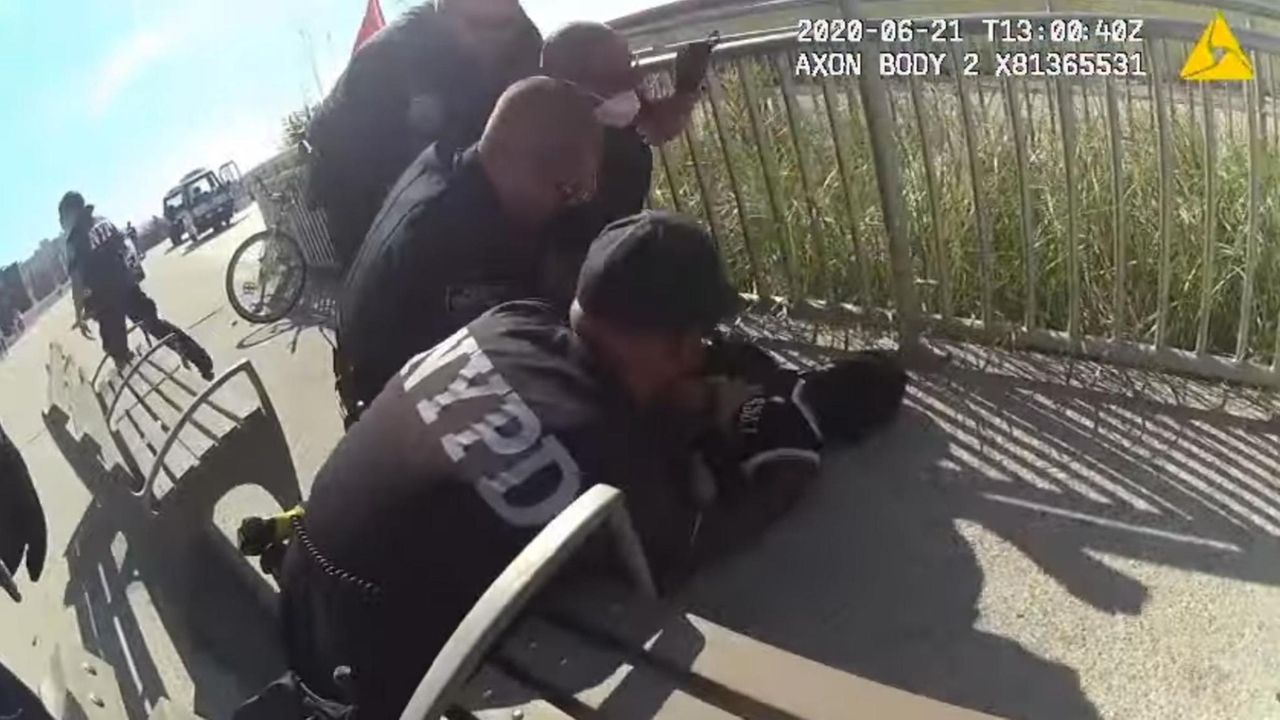 This is an excerpt of body camera footage released by the NYPD Sunday. The full 35-minute video shows several minutes of police verbally interacting with the man and two others, who are recording the police on their phones. Police tackle the man after he makes a sudden movement off camera. Credit: NYPD

﻿Bystander video of an NYPD officer using an apparent chokehold on a man being arrested on a Rockaway boardwalk went viral Sunday morning, with the NYPD releasing its own body-worn camera footage of the encounter hours later and the officer accused of using the banned technique suspended.

There had been at least 114,000 views of the 26-second viral video showing several officers trying to restrain the man, who is black, before the 35-minute police video was released by the NYPD.

“Accountability in policing is essential. After a swift investigation by the Internal Affairs Bureau, a police officer involved in a disturbing apparent chokehold incident in Queens has been suspended without pay,” Commissioner Dermot Shea said in a statement.

“While a full investigation is still underway, there is no question in my mind that this immediate action is necessary,” Shea said. “We are committed to transparency as this process continues.”

The body-camera footage showed the officers speaking at length with the man and two others in a sometimes-contentious back and forth. The man drifts off-camera and does something that draws a rebuke from one of the other men and causes police to tackle him, with four officers appearing to restrain him with his face down.

The officers initially responded to reports of a man on the boardwalk throwing things at people, according to a spokesman for the NYPD.

On the bystander video, a person is heard shouting: “Yo, he’s chokin’ him!” as others curse and shout at the police. One officer tells the officer who has him in an apparent chokehold to back off. They then stand the man up and take him away.

The body-camera footage shows the full encounter, including the man later handcuffed, sitting on a fire truck and saying he doesn’t want to go to the hospital.

Charges against the man, whose name was not released, were pending, the NYPD said.

On Sunday night, on Twitter, de Blasio said: "... the officer who intervened to stop his colleague did exactly the right thing. I commend him. That is what we need to see from all our officers.”

In 2014, the use of an apparent chokehold was to blame for the death of Eric Garner, a Staten Island man who was being arrested on suspicion of selling illegal cigarettes on Staten Island. Daniel Pantaleo, the officer who used the tactic, which has been banned for decades by the NYPD, was fired in 2019 after being found guilty in a department tribunal. Garner’s dying words, “I can’t breathe,” became a rallying cry for the then-nascent Black Lives Matter movement.

The encounter comes just weeks after George Floyd's death in Minneapolis police custody, which sparked protests nationwide, including several massive demonstrations in New York City, and a rollback of the state law sealing records of police misconduct. A video of that arrest May 25 shows Floyd under the knee of the officer for nearly nine minutes before dying.

Sunday marked one of the first times the NYPD has released same-day video of police body-camera footage that doesn't necessarily clear an officer of misconduct.

On Tuesday, de Blasio announced a new policy to disclose footage within 30 days of a serious incident.