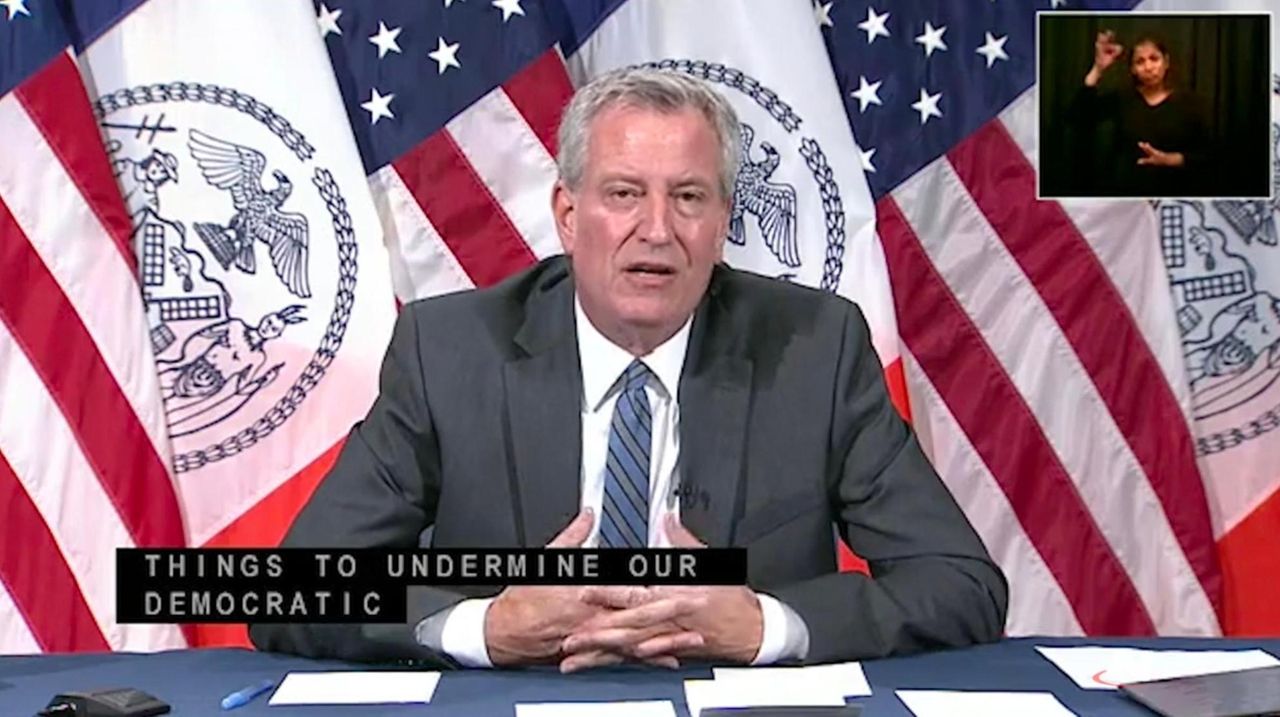 Mayor Bill de Blasio said that the NYPD’s warrant squad should have chosen different circumstances to arrest a protester wanted for vandalism. Video of the arrest depicts the police officers forcing the demonstrator off a skateboard and into a minivan.  Credit: NY Mayor's Office

Video of the arrest — showing several plainclothes officers at Second Avenue and East 25th Street on Tuesday grabbing and forcing the demonstrator into an unmarked minivan before uniformed bike police surrounded the scene — provoked outrage from some.

De Blasio said that while he supported the arrest of those accused of property damage, “I think there is a better way to get that done.”

“It made sense to do it in a situation that was not in the middle of an ongoing protest, unless you’re obviously talking about a particularly serious offense,” de Blasio said at his daily news conference.

In a news release, the Legal Aid Society identified the arrestee as Nikki Stone.

“This arrest targeted a transgender woman while she was exercising her First Amendment right to protest the very abusive policing tactics the NYPD used against her,” the release said.

The arrested demonstrator is 18 and homeless, according to a tweet from the Human Rights Campaign, an LGBTQ rights group.

The video, with 12 million views as of late Wednesday afternoon, shows the demonstrator being grabbed off a skateboard by the officers as other demonstrators scream and record the encounter.

According to the NYPD’s Twitter account, the person who was arrested “was wanted for damaging police cameras during 5 separate criminal incidents in & around City Hall Park.”

That’s where a nearly monthlong encampment of anti-police demonstrators set up vigil in late June to demand cuts to the NYPD budget. The encampment was cleared last week by police officers in riot gear after it grew to be dominated by homeless people and was the site of several incidents of violence.

De Blasio said he’d speak with Police Commissioner Dermot Shea about the circumstances of the arrest.

“A lot of us have watched in pain what’s been going on in Portland, Oregon. And the fact that you see federal agents, federal officers, federal troops clearly doing inappropriate things meant to undermine our democratic process, that’s just thoroughly unacceptable. So anything that even slightly suggests that is, to me, troubling, and it’s the kind of thing we don’t want to see in this city,” de Blasio said. “This is not Portland.”

In that city, the federal government has deployed officers with the mandate to protect property like the U.S. courthouse, which has come under attack by demonstrators at night for more than a month using fireworks and other means.

Late Wednesday morning, Oregon Gov. Kate Brown's account tweeted that conversations with Vice President Mike Pence had led to an agreement to withdraw federal officers from Portland, and, the account tweeted, "local Oregon State Police officers" would be in place.

In Portland proceedings before a federal judge who later refused to curb the actions of federal officers, the state pointed to a total of two allegations of officers grabbing people off the street, one of which is on video.

There have been allegations that the federal officers were unidentified, though the U.S. Department of Homeland Security, which is in charge of the federal officers, on Twitter quoted an article making such an accusation and noted that the depicted officer is wearing a patch with a unique alphanumeric identifier.

De Blasio’s press secretary, Bill Neidhardt, said the mayor spoke Tuesday night to Shea about the arrest in Gramercy and would do so again.

“I don’t like it. I don’t think it was a good decision,” de Blasio said of the arrest, adding: “the decision to arrest someone who’s damaged public property — yes, that’s a good decision, the time and place was not.”

Pressed for where, how and whether the NYPD should have made the arrest, de Blasio did not give a specific answer. Later, he said: “There is a warrant squad, there’s one as far as I know for generations. Their work often involves having to do things in a quiet manner, by definition. So they don’t come up with, you know, sirens blaring and always in police vehicles. But it was quite clear that that was an arrest being effectuated by the NYPD.”

Gov. Andrew M. Cuomo on a conference call with reporters on Wednesday, said of the arrest: "I’m surprised that, especially at this time, the NYPD would take such an obnoxious action. It was wholly insensitive to everything that’s going on. It was frightening.”