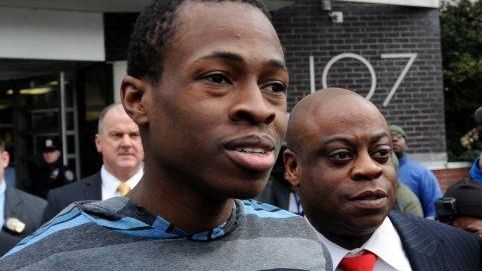 NYPD detectives arrested a Brooklyn man in connection with the August killing of Howard Beach jogger Karina Vetrano, a crime to which he confessed, officials said Sunday, Feb. 5, 2017. At a news conference inside the station house of the 106th Precinct in Ozone Park, Chief of Detectives Robert Boyce identified the suspect as Chanel R. Lewis, 20, of East New York, where he lived with his mother and had no prior criminal record.  Credit: AMNY / Vin Barone

Using DNA technology and old-fashioned paper-chasing, NYPD detectives arrested a Brooklyn man in connection with the August killing of Howard Beach jogger Karina Vetrano, a crime to which he has confessed, officials said Sunday.

At a news conference at the 106th Precinct in Ozone Park, Chief of Detectives Robert Boyce identified the suspect as Chanel R. Lewis, 20, of East New York, where he lived with his mother and had no prior criminal record.

Lewis was to be initially charged with second-degree murder, said a spokesman for Queens District Attorney Richard Brown. Lewis was arraigned Sunday night in Queens Criminal Court and held without bail.

Lewis, who is unemployed, was first interviewed by detectives on Thursday and volunteered to give a sample of his DNA. The city medical examiner matched it on Saturday to genetic material found on Vetrano when her body was found Aug. 2 in the weeds of Spring Creek Park, where she had gone for a jog, Boyce said. After the DNA match was made Saturday afternoon, Lewis was taken into custody around 6 p.m. that day, he added.

“This is a very good day for justice in New York City,” said Boyce, whose staff had worked for months and followed hundreds of leads seeking a break in the case.

During follow-up interviews with detectives, Lewis, whose only previous problems were quality of life summonses, “made detailed incriminating statements and admissions,” according to Boyce.

“He pretty much gave it up, there is no question,” said a law enforcement official who didn’t want to be identified, when asked about Lewis’s statements.

Boyce didn’t divulge what Lewis said to detectives but did note that the crime, in which Vetrano, 30, was strangled and sexually assaulted, was a random attack.

“It appears to be a chance encounter,” Boyce said. “There was no stalking.”

Reached at his Howard Beach home, Vetrano’s father said Boyce came to his house immediately after the news conference.

“The cops did a great job,” Philip Vetrano said. “My days have been spent searching for this killer, now I don’t know what I will do … At least now we can start to grieve like a family which lost its child.”

Vetrano added that he will still be testifying at a special state hearing Friday in Manhattan to ask officials to authorize “familial searching,” a DNA analysis method that some experts believe may have focused detectives earlier on a possible suspect in the case.

Boyce said investigators were not clear if there were any relatives of Lewis who had DNA profiles in the state database. Familial searching involves matching DNA at a crime scene with any relative who might have their DNA in a databank, then using investigative techniques to zero in on a suspect.

DNA evidence found on Karina Vetrano’s body didn’t match with any known profiles in state databases of convicted criminals. But in the end that evidence proved vital.

“You got to remember, Karina helped us,” Boyce said. “She had DNA under her nails, she had much DNA on her back, she had more DNA on her cellphone.”

A few hunches and tedious paper-chasing led detectives to Lewis. Back in May, a 911 caller telephoned police about a suspicious man lurking in the Howard Beach community and in backyards. John Russo, a NYPD lieutenant who works with Boyce and lives in the area, remembered seeing a suspicious person around that time as well, said one official. Cops then spotted Lewis, questioned him and had his name in their memo book, Boyce said.

As part of an effort to backtrack through all recent cases, detectives found three quality of life summonses given to Lewis in the Howard Beach area and last week visited him at his home for an interview in which police said he incriminated himself in the crime.

On Sunday, a heavy police presence was seen outside of Lewis’s basement-level apartment in East New York.

Neighbor Ann Douglas, 30, who works in multimedia and lives across the street from Lewis and his family, said she didn’t know them well.

She was shocked to hear the news. “It’s a sigh of relief, but it’s just scary to know that the suspect had been living right here for so long,” Douglas said.

“It’s about time that they found him, it has been six months, so we are all very happy,” said Jerry Aliberti. “It is amazing that such individuals live in this world that could do such a thing.”

“We are very happy for Mr. Vetrano and we are so happy he was persistent to find this killer … it was really hard for him,” said Santa Locascio. “We are so relieved they found the real person that did that.”

Since August, cops had a command post on 79th Street in Howard Beach near the spot where Karina Vetrano’s body was found. On Sunday, the police van was no longer there.