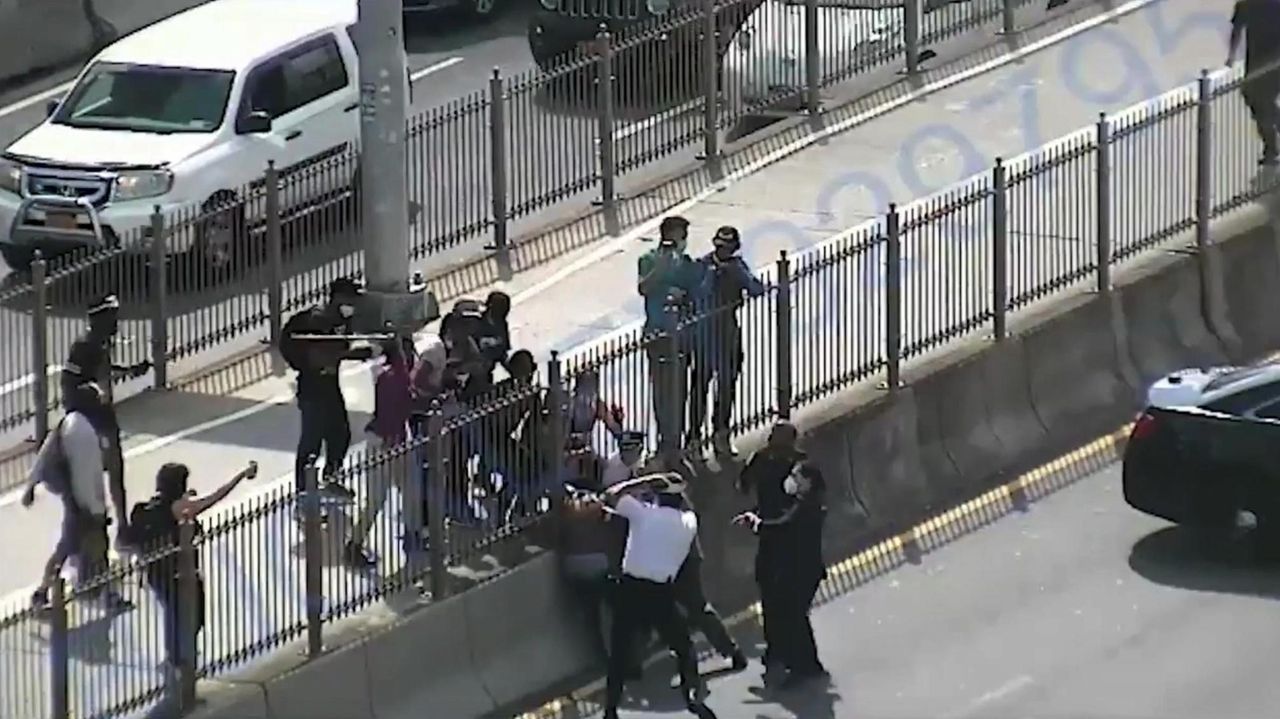 Someone wielding a stick struck three NYPD officers who appeared to be detaining a man during what cops said was a protest on the Brooklyn Bridge, according to video the department posted Wednesday on Twitter. Credit: Twitter / NYPD NEWS

Eight NYPD officers were injured Wednesday — including the department's top uniformed cop — during clashes with counterprotesters that stemmed from a pro-police rally in Brooklyn, according to department spokesman.

In one of the clashes, someone wielding a stick struck three NYPD officers who appeared to be detaining a man during an altercation on the Brooklyn Bridge, according to video the department tweeted Wednesday afternoon.

The 10-second video shows what appears to be three officers struggling with the man in the bridge’s Brooklyn-bound traffic lanes when the person with the stick attacks from the pedestrian overpass, and others struggle with the officers.

“Three officers violently attacked by protesters crossing the Brooklyn Bridge,” the NYPD’s official account, @NYPDNews, tweeted. “This is not peaceful protest, this will not be tolerated.”

In the video, the man being detained is hustled away as the person with the stick retreats. The NYPD also posted several photos of injured cops, some with bloody faces. Baker said one officer needed staples on his head.

Around the same time, closer to Brooklyn, officers belonging to a unit that polices civil disturbances clashed with counterdemonstrators who Baker said attacked the cops. Four were injured in that altercation.

Richard Esposito, an NYPD spokesman, said the officers' injuries included cuts and a broken orbital bone. All were treated and released. There were 33 arrests throughout the protest, Baker said.

The pro-cop demonstration began at Brooklyn’s Cadman Plaza Park, where hundreds wore blue and carried signs, such as “AMERICA SUPPORTS THE POLICE!” Social media shows Assistant Chief Judith Harrison, the new commander of the NYPD’s Brooklyn North operation, addressing the crowd, which had by then crossed the bridge into Manhattan, about the power of prayer and unity.

Last month, Esposito said at least 354 cops had been injured during the protests over the death of George Floyd.

Esposito also said 132 protesters had been injured, based on official medical treatment forms, but added that “this is without a doubt an undercount, as it will not, for example, include persons who chose not to report injuries that were not apparent or persons who were not arrested and might have suffered an injury.”

The NYPD is being investigated by state Attorney General Letitia James over allegations of indiscriminate use of batons, pepper spray and other physical force against nonviolent protesters.

Most of the Floyd protests have been nonviolent, although there have been some clashes between the police and the protesters, including on June 28, when several marchers tried, unsuccessfully, to prevent the arrest of three vandals allegedly tagging graffiti on a police vehicle. In the melee, a cop discharged pepper spray that got in another officer’s eyes, and a sergeant shoved a demonstrator, who lost his footing and bumped into a cop on a scooter who fell over.

Later Wednesday, Mayor Bill de Blasio signed legislation he called the NYPD Accountability Package, which includes bills to codify the right to record cops, forces the NYPD to disclose its surveillance capabilities and criminalizes the use of chokeholds as well as sitting, kneeling or standing on someone’s chest or back during an arrest.

Outside City Hall, an anti-police encampment entered its third week Wednesday, with dozens of people. The round-the-clock assembly, which began last month to push for funding cuts to the NYPD budget, has since drawn some homeless people and grown to include tents, tarps and graffiti on nearby government buildings. Occupants at the encampment Wednesday smoked marijuana, and the area was covered with anti-police graffiti.

The encampment is surrounded on three sides by fencing linked together by occupants, who control access.

“Do you support Black Lives Matter?” a woman questioned those who sought to walk into the public plaza. Within the gates, she warned, no video or photos were allowed.

Groups roll out website to promote biking, walking, less car use
It will take just over 2 weeks for all LI schools to welcome back students
LI restaurants, theaters push back on state's vaccine mandate
More LI colleges, universities moving toward mandatory COVID-19 shots
Seeking a 'New England' feel for hamlet's blighted downtown
Riverhead to activate remaining downtown security cameras
Didn’t find what you were looking for?