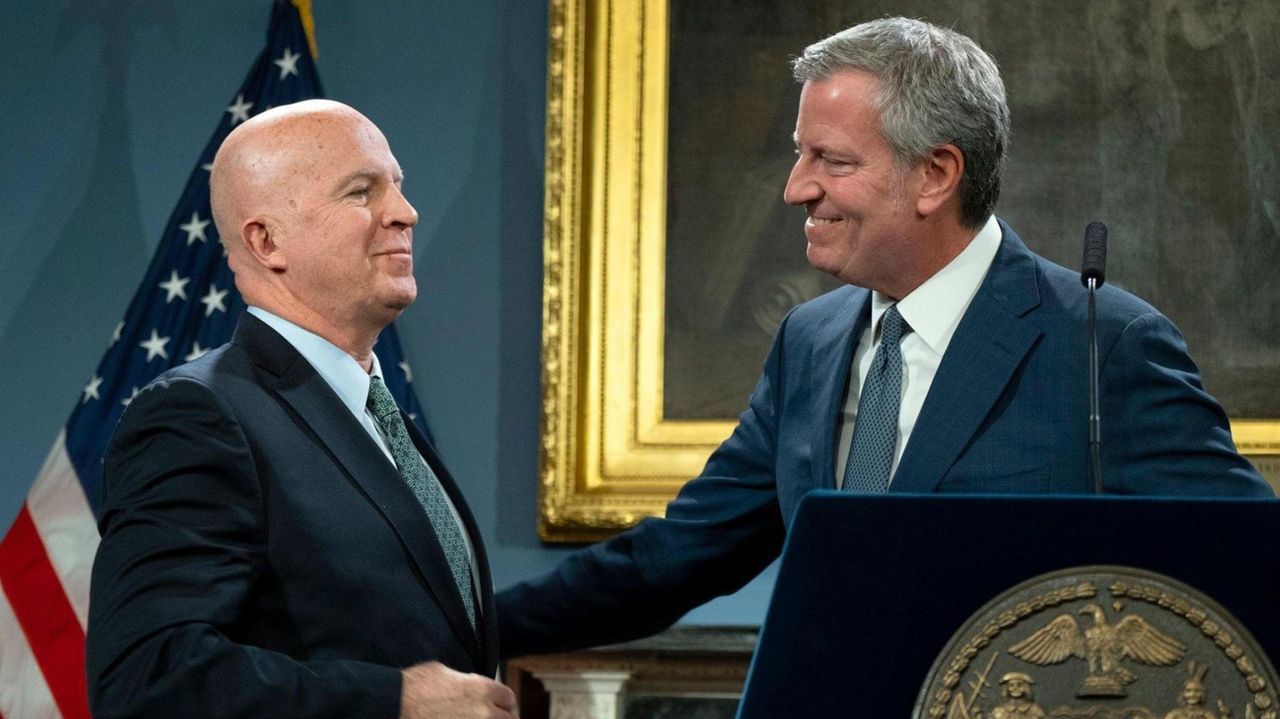 NYPD Commissioner James P. O’Neill, who piloted the 36,000-strong department for three years, will resign at the end of the month to take a job in the private sector, he said Monday.

At a City Hall news conference announcing O’Neill’s departure, Mayor Bill de Blasio said he had picked Chief of Detectives Dermot Shea to become the NYPD's 44th police commissioner and praised O'Neill for his more than three decades as a cop.

“For 35 years Jimmy O’Neill has served the city with dedication and dignity and his whole heart," de Blasio said. “I will miss him."

De Blasio and the man he chose to replace William Bratton in September 2016 then shook hands at the lecturn.  .

O’Neill wouldn’t disclose his new private sector job but department officials speculated he might be headed for a top security post related to professional hockey, a sport he loves.

"It's the right time and I am going to miss it," the police commissioner said at the news conference of his decision to step down.

Regarding Shea, 50, who grew up in Sunnyside, Queens, de Blasio said: “He is a driven man in the best sense … the fact is Dermot is one of the best prepared police commissioners.”

By tapping Shea, a widely respected chief and someone driven by data and metrics to measure success of investigations and precision policing, de Blasio looked past other insiders like current First Deputy Commissioner Benjamin Tucker, the highest ranking black member of the department, and Chief of Department Terence Monahan.

De Blasio said he decided to keep the search for O'Neill's replacement in-house because an insider wouldn’t need to go through a steep learning curve on department priorities. Outside the news conference, Councilman Donovan Richards (D-Queens), head of the public safety committee, said the mayor missed an opportunity to pick someone reflecting the department's diversity.  The city has had two black commissioners, Benjamin Ward [1984 to 1989] and Lee Brown [1990 to 1992].

Bratton applauded de Blasio’s decisiveness in selecting Shea and not getting bogged down in a long national search for a candidate who would need to pass some racial or political litmus test.

“In making a selection," Bratton said, "the last thing you should be worried about is race or ethnicity. You need the best person possible."

The resignation of O’Neill, 62, will end a 35-year career with the NYPD and the transit police force it absorbed. Since he became commissioner, overall crime in the city has dropped, although troubling upticks remain in certain areas of Brooklyn and Queens. The latest citywide crime reports through Nov. 3 have homicides up by 2.3 percent and shootings up 4.3 percent, while all serious crimes are down about 1.8 percent.

In addition, the job of policing is viewed by some in the department as more difficult recently because of looming changes in the criminal justice system that will constrain officers and prosecutors alike. O’Neill has also had to grapple with a rise in cop suicides, a problem shared by police departments nationwide.

In August, O’Neill made the unpopular decision among the NYPD's rank and file to fire Officer Daniel Pantaleo for using a barred chokehold in the 2014 death of Eric Garner during the Staten Island man's arrest for allegedly selling untaxed cigarettes. Firing Pantaleo led to virulent criticism from police unions, including the Police Benevolent Association, which essentially asked cops to work by the book and not take unnecessary chances that could get them in trouble with police reform advocates.

Asked if the pressure of the Pantaleo decision contributed to his resignation, O’Neill acknowledged that firing the officer affected him deeply.

“I am not going to stand up here and say it didn’t weigh heavily,” he said. “This job comes with a lot, a lot of pressure. This is all I have thought about in the last 38 months, 24-hours a day, seven days a week."

O'Neill, born and raised in Brooklyn, became a transit cop in 1983. The NYPD later absorbed the independent force and O'Neill rose steadily through the ranks, ultimately rising to chief of department under Bratton. When Bratton resigned, both O’Neill and Tucker were vying for the top spot.

Within 14 months of O’Neill becoming police commissioner, the city was rocked by two terrorism attacks, the fatal shooting of an NYPD sergeant and the challenge of guarding President Donald Trump's Manhattan home at Trump Tower on Fifth Avenue.

His leadership ability faced its first test a day after he took the top job when the city was rocked by the Chelsea pressure cooker bombings, which left 31 injured. The NYPD and federal officials quickly caught suspect Ahmad Khan Rahimi, who was later convicted. That November, O'Neill attended his first funeral as police commissioner for a cop killed in the line of duty after Sgt. Paul Tuozzolo, 41, a Greenlawn resident, was shot to death in the Bronx by Manuel Rosales, 35, of Brentwood, while responding to a 911 call of a disturbance at the home of the gunman's estranged wife. Rosales was shot and killed by the police.

Just over a year later, on Oct. 31, 2017, eight people were killed when a lone wolf attacker claiming inspiration by ISIS and driving a pickup truck, mowed down bikers and pedestrians on the West Side of Manhattan.

Crime declined steadily under O’Neill, who touted a Neighborhood Policing program as a key to continued reductions. The program involved getting officers closer to their communities, and while O’Neill and de Blasio have maintained that Neighborhood Policing has contributed to a drop in crime, little empirical evidence exists to back up the claim. The Rand Corporation is studying the policy impact. O’Neill has declined to discuss any preliminary results of the study.

Shea said he was committed to continuing Neighborhood Policing and improving the program.

"Commissioner O’Neill’s tenure at the NYPD has seen some steps toward progress. The number of stops and other officer-civilian interactions continues to decline, an important trend that must be sustained,"  Lieberman said. "… Despite these steps of progress, trust between police officers and community members remains low, especially for Black and Brown New Yorkers.…As the NYPD enters its next phase of leadership, the Department must prioritize transparency, accountability, and repairing relationships with the people they serve.”

The NYPD has also dealt with a spate of often videotaped assaults on police officers, some in broad daylight.

Shea said assaults on cops had to be addressed forcefully with “zero tolerance.”

Michael Palladino, head of the Detective Endowment Association, said Shea was “a sharp guy, well liked” who had garnered a great deal of respect from detectives.

Dermot Shea, NYPD chief of detectives, to lead the forceShea assumes command of the 36,000-strong force as crime has continued to fall over consecutive years.