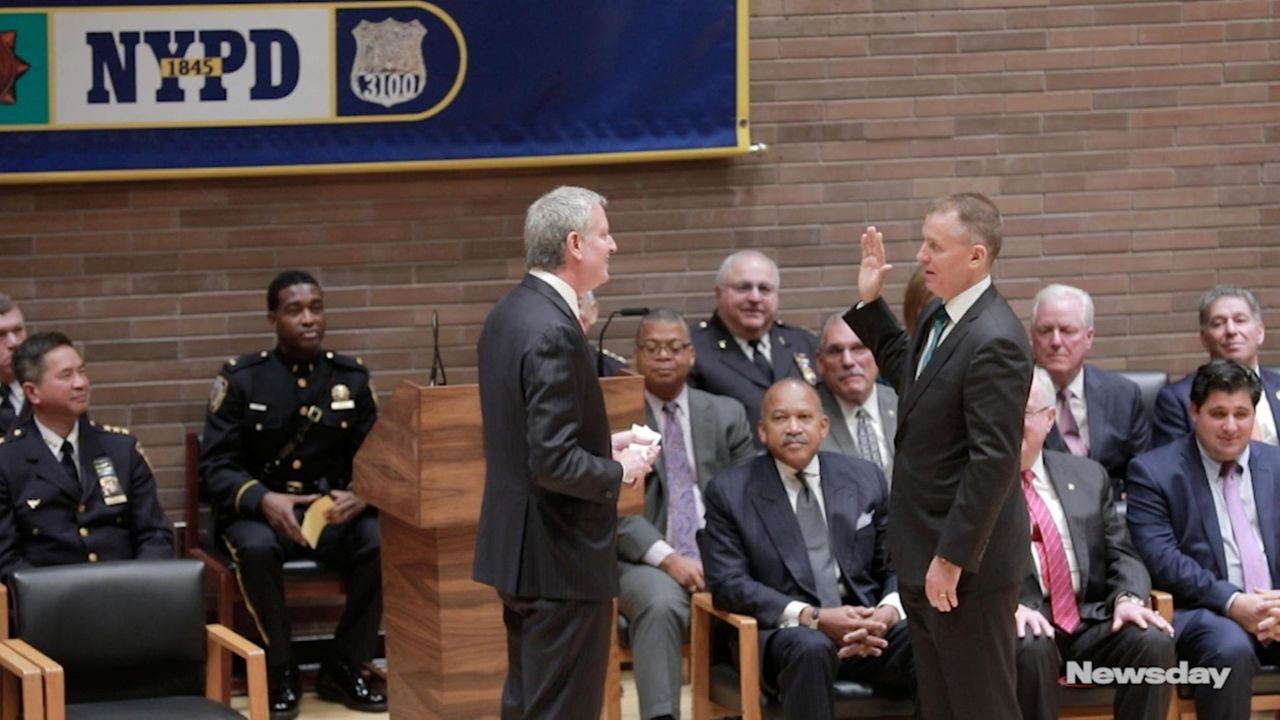 New York City Mayor Bill de Blasio swore in Dermot F.  Shea as the 44th commissioner of the NYPD on Monday. Shea spoke about his plans for the department.  Credit: Newsday / Yeong-Ung Yang

A moment before he formally swore in Dermot Shea on Monday as the 44th NYPD commissioner, Mayor Bill de Blasio asked him if he was ready.

Shea’s answer got laughs from the overflow crowd at police headquarters in Manhattan.  But it also underscored the enormity of his new responsibilities leading some 36,000 cops in the nation’s largest city.

The son of Irish immigrants who settled in Sunnyside, Queens in the 1950s, Shea, 50, assumes command at a time when NYPD officers are being assaulted on the streets and the criminal justice system in New York State is on the verge of significant changes in bail and discovery rules. The changes are being viewed by many police  with apprehension.

However, Shea made it clear in his 19-minute address to an audience of NYPD personnel as well as politicians that he wanted cops to know he had their backs.

“There is and must always be zero tolerance for violence against our police officers,” Shea said to sustained applause.

Shea was referring to recently publicized attacks on city cops who were taunted, struck with objects and doused with water while trying to make arrests.

“An attack on a single officer is an attack on society as a whole. It should and must be denounced by all New Yorkers, especially those in leadership positions,"  Shea said.  “It is as simple as this, every person we see deserves respect and every cop must be respected too if they are to do their very dangerous job correctly.”

Shea had a private swearing in at midnight Saturday.  He had been chief of detectives for less than two years and joined the NYPD in 1991.

While extolling the dramatic declines in crime over two decades and vowing to drive it down even further through the Neighborhood Policing strategy, Shea offered no specifics on what he planned next.

But Shea did say he would soon issue a directive aimed at spelling out the NYPD’s youth strategies throughout the department to guide children away from the criminal justice system.

De Blasio’s designation of Shea in November to take over from James O’Neill drew some criticism from politicians because the mayor didn’t pick a minority. But the mayor sounded confident Monday that he chose the right person for the job.

“I had the advantage of watching Dermot Shea in action for six years,” said de Blasio, praising the new police commissioner as “a man always ready to innovate, always ready to hope.”

Shea indicated his staff appointments, soon to be announced, would reflect diversity.

As Shea spoke, Serena, his wife of 27 years, was seated on the dais, holding a red and white bouquet. The couple’s three children — Jacqueline, Lauren and Richard — watched from the audience.  Shea’s mother,  Ellen, who was also in the crowd, along with other family members, took photos with a smartphone.