An NYPD officer seen on bystander video shoving a 20-year-old woman demonstrator to the ground, causing her physical injury during a march last week against police brutality, has been arrested and charged, the Brooklyn district attorney’s office said. Credit: Charles Eckert

Thousands of demonstrators marched across the Brooklyn Bridge on Tuesday, hours after an NYPD officer from Holbrook was arrested and charged in connection with an assault on a woman at a rally last month.

Protesters have rallied for 13 days in New York City following the death of George Floyd, a handcuffed man who died May 25 after a Minnesota cop put his knee on Floyd's neck for almost nine minutes. A funeral was held Tuesday for Floyd in Houston, where he was raised.

The NYPD said Wednesday morning that there were no overnight arrests tied to the demonstrations.

On Tuesday, the Brooklyn District Attorney's Office announced that Vincent J. D’Andraia, 28, and most recently assigned to the NYPD's 73rd Precinct in Brownsville, faces criminal charges of third-degree assault, fourth-degree criminal mischief, second-degree harassment and third-degree menacing. D'Andraia was charged after being seen on video violently shoving a woman to the ground during a Brooklyn protest against police brutality on May 29, according to the district attorney's office. 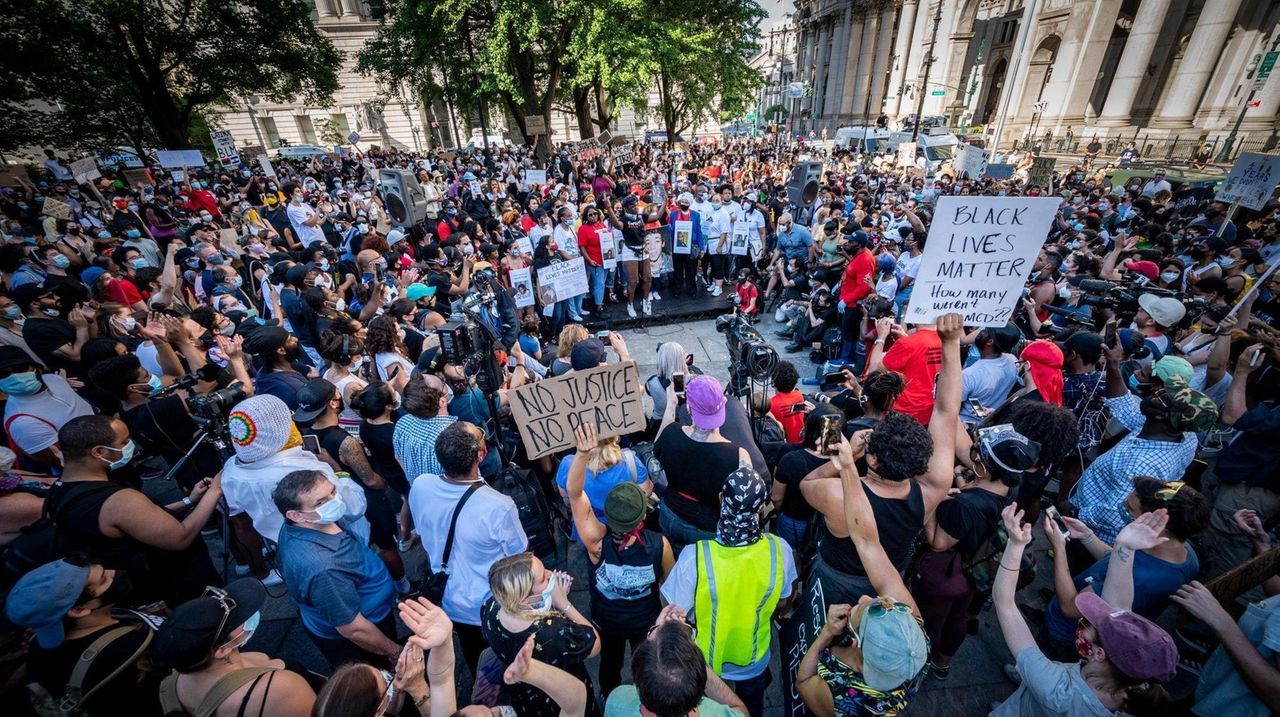 Later Tuesday, protesters marched across the Brooklyn Bridge and gathered at a park just north of City Hall in Manhattan as another day of city demonstrations continued.

Protesters packed into the park just after 6 p.m. and remained there well past 7 p.m., many holding signs as several speakers addressed the crowd.

D’Andraia is the first known NYPD officer to be criminally charged for conduct while policing city protests over Floyd's caught-on-video death.

D’Andraia's attorney, listed in court records as Stephen Worth of Manhattan, couldn't be reached for comment. The case is due back in court Oct. 15.

Over the past 13 days of city marches, NYPD officers have been seen by reporters and on viral video shoving, as well as using batons, pepper spray and other physical force against nonviolent protesters. Police Commissioner Dermot Shea said last week that there were a half dozen internal disciplinary probes in connection with cops' behavior at the protests. On Monday, the department said there were 132 arrestees injured, but that the figure is likely an undercount and wouldn't include those like the woman — identified by the Brooklyn District Attorney's Office as Dounya Zayer, 20 — who was not arrested.

"Although we are far from Justice," her tweet said, "it is a step in the right direction."

On Friday, the NYPD announced that an officer — apparently D’Andraia, though the department didn't publicly name him at the time — had been suspended without pay, in addition to another city cop who pulled down a protester's coronavirus-prevention mask the next day to pepper spray him.

D’Andraia's supervising officer is to be transferred, though the NYPD did not say to what post.

According to the district attorney's office, D’Andraia shoved the woman, at 8:44 p.m. on May 29 near Brooklyn’s Barclays Center, as he walked with other officers monitoring demonstrators protesting the Floyd death.

“The victim, a 20-year-old woman, was in the street when the defendant told her to move. As she asked why, the defendant allegedly smacked her cellphone out of her hand, and violently shoved her to the ground, according [to] the investigation. She can be seen rolling on the street and into a curb. Meanwhile, the defendant and fellow officers can be seen to continue walking,” the office said in a news release.

At his arraignment hearing Tuesday, D’Andraia was ordered to stay away from Zayer, according to Oren Yaniv, a spokesman for DA Eric Gonzalez. Zayer has said she was treated for a seizure and a concussion.

In the news release, Gonzalez said: “I fully support the long-held American tradition of non-violent protest. As District Attorney I cannot tolerate the use of excessive force against anyone exercising this Constitutionally guaranteed right. This is especially true of those who are sworn to protect us and uphold the law. I am deeply troubled by this unnecessary assault. We will now seek to hold this defendant accountable.”

Separately Tuesday, the NYPD announced in a statement that an officer had been put on modified duty who was seen on a bystander's video opening the door of a moving police car on a protester and striking that protester. The officer's name was not disclosed.

"There are other matters that we are actively investigating and we will continue to be transparent as the process continues," the statement said.

In a news release about D’Andraia's arrest, Police Benevolent Association President Patrick Lynch blamed Mayor Bill de Blasio and NYPD leadership for "sacrificing cops to save their own skin."

"They created the failed strategy for managing these demonstrations. They sent police officers out to do the job with no support and no clear plan," Lynch said. "They should be the ones facing this mob-rule justice. We will say it again: New York City police officers have been abandoned by our leadership. We are utterly alone in our efforts to protect our city.”

Near City Hall Tuesday night, thousands listened as speakers assailed the NYPD, demanded funding cuts to the department, and recounted incidents of police violence, in English and Spanish.

“Do you think that police are working for their communities?” one speaker said in Spanish, translated by another protester.

“No!” came a response from many listening.

Meanwhile, a man in a protective mask walked through the crowd holding two bottles of hand sanitizer, offering free squirts to protesters.

Shy Browne, 33, of East New York, Brooklyn, and the mother of three boys, ages 3 months, 3 and 12, said there needs to be more accountability to the public from police officers.

“There’s injustice, and I feel like we all just need to come out in numbers and show them that we’re here, we’re not going anywhere,” said Browne, a hiring manager for the city Department of Finance.

Although cops on foot and in vehicles and riot helmets trailed the protesters Tuesday, as at the previous demonstrations, there were far fewer officers.

As the crowd marched on Centre Street past Manhattan’s main jail — long known as The Tombs — demonstrators looked skyward at the small slotted windows of the jail, covered with bars, and yelled, “shut it down!”

In Brooklyn, the digital billboard at the Barclays Center late Tuesday night displayed a quotation from Martin Luther King Jr.: “The time is always right to do what is right.”

On the plaza below, written in chalk, “make America NOT RACIST for the FIRST TIME,” and buffered by the initials “BLM” enclosed in hearts.

Other chalk writings included, “Balance the Scales,” outlined by the scales of justice, “DEFUND the POLICE” and “INVEST in COMMUNITIES.”

A cyclist holding an American flag — with “BLACK LIVES MATTER” taped on the Stars and Stripes — led a group of about 50 fellow cyclist demonstrators in the plaza.

In a show of support for protesters, de Blasio earlier Tuesday announced that the city would honor the Black Lives Matter movement by painting roadways and renaming city streets in each borough with the slogan.

“It’s time to do something officially representing this city to represent the fundamental power of Black Lives Matter,” de Blasio said.

The mayor's announcement came after Washington, D.C. Mayor Muriel Bowser renamed a part of a major roadway near the White House "Black Lives Matter Place" and had the city paint the slogan in giant yellow letters onto the street.