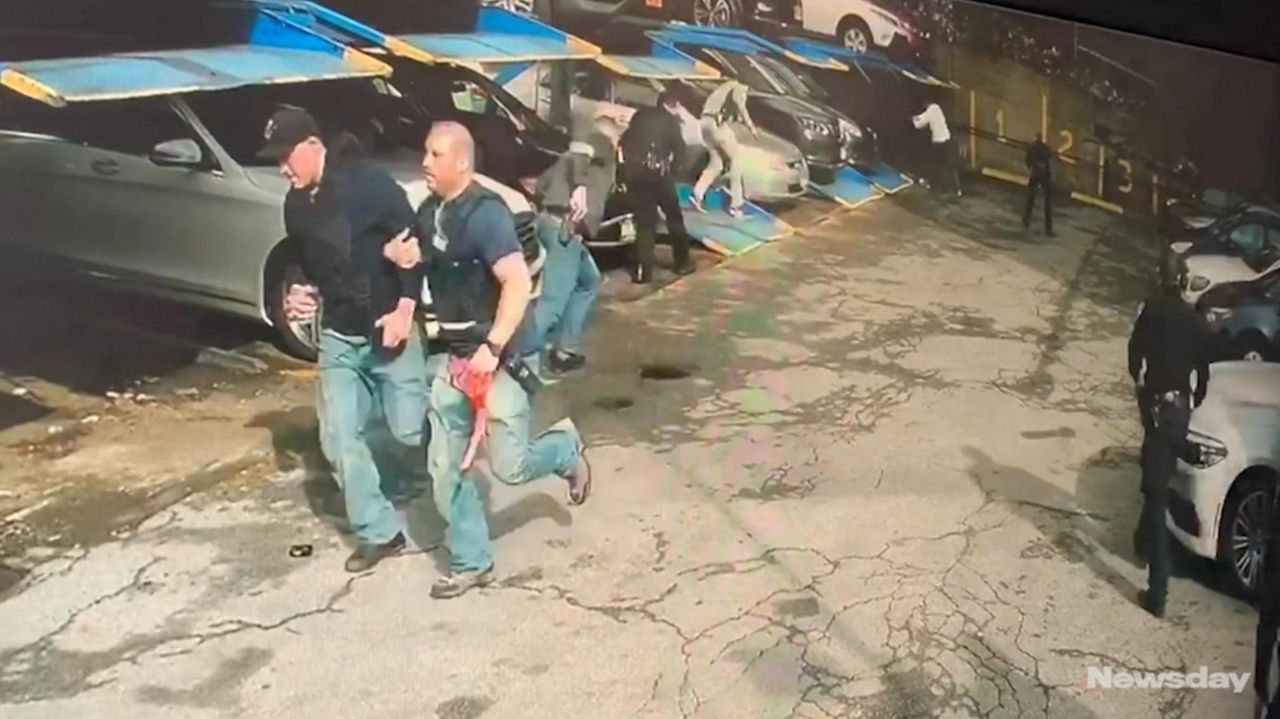 On Thursday, an NYPD officer from Suffolk County was shot under his arm and another officer narrowly missed being hit in a confrontation that left the suspect dead in Washington Heights, authorities said.

An NYPD officer from Suffolk County was shot under his arm and another officer narrowly missed being hit in a confrontation that left the suspect dead Thursday in Washington Heights, authorities said.

Officer Justin Vartanian, 34, of the 34th Precinct was responding to reports of gunfire on foot, chasing a male holding a weapon, when the pursuit ended up in a parking lot on Broadway, just north of West 187th Street about 4:30 p.m., police said. The suspect took cover behind the last parked vehicle, and Vartanian was three vehicles away when they began shooting at each other, police said.

"The suspect then fired three rounds at the police officer, who was struck in the right armpit," NYPD Commissioner James O’Neill said in a news conference with Mayor Bill de Blasio at Mount Sinai St. Luke’s Hospital in Morningside Heights, where the officer was in stable condition. "The wounded officer fires back one time."

About the same time, another 34th Precinct officer drove up in an unmarked vehicle, and just after he got out, a bullet from the suspect's gun flew past him and pierced his vehicle's windshield, police said.

Police Officer Justin Vartanian, who was injured in the line of duty yesterday during a gunfire exchange with a perpetrator in Manhattan, leaves the hospital to a loud ovation and applause from his fellow police officers today. We wish him a full and speedy recovery! pic.twitter.com/45IX7WJdb5

The second officer fired three shots, one of which hit the suspect in the chest, killing him, the NYPD said. The suspect was pronounced dead at NewYork-Presbyterian Hospital/Columbia University Medical Center.

Police said they have bodycam and parking lot video of the shooting, and at the hospital, the commissioner showed a photo of the unmarked Ford with the bullet hole. "The police officer was standing right next to it when it was fired," O'Neill said. "I saw the video. It just missed him."

A firearm was found, investigators said.

Police said a second suspect was arrested on a charge of obstructing governmental administration because he was videotaping the incident as it happened. The NYPD is investigating what role, if any, he had in the shooting.

O'Neill said the wounded officer, who has been on the force five years, was in "great spirits."

The NYPD head called the first officer's courage "quite unbelievable" and said police would release video of the shooting.

"The subject has a gun in his hand, they run into the parking lot, and at close quarters, they exchange shots," the police commissioner said. "It’s pretty amazing to see . . . We run towards danger, but when you see this video, you’ll really understand what that phrase means."

De Blasio, who met with the two officers' families, praised the officers, saying they "did everything right."

"This was a fast, intense episode," de Blasio said. "Thank God it came out the way it did."

Authorities did not release the names of those involved.

Father Ambiorix Rodriguez, the pastor of St. Elizabeth Church on Wadsworth, was in the church during the gunfire and came out afterward.

"I came out when I heard the helicopters," he said. "I began praying."

With Chau Lam and Erika Peters