A fast-moving house fire in Queens Village Sunday afternoon killed five people ranging in age from 2 to 20 — the largest loss of life in a single fire in the city in two years.

All the victims lived in the house, and the investigation is continuing, police said. 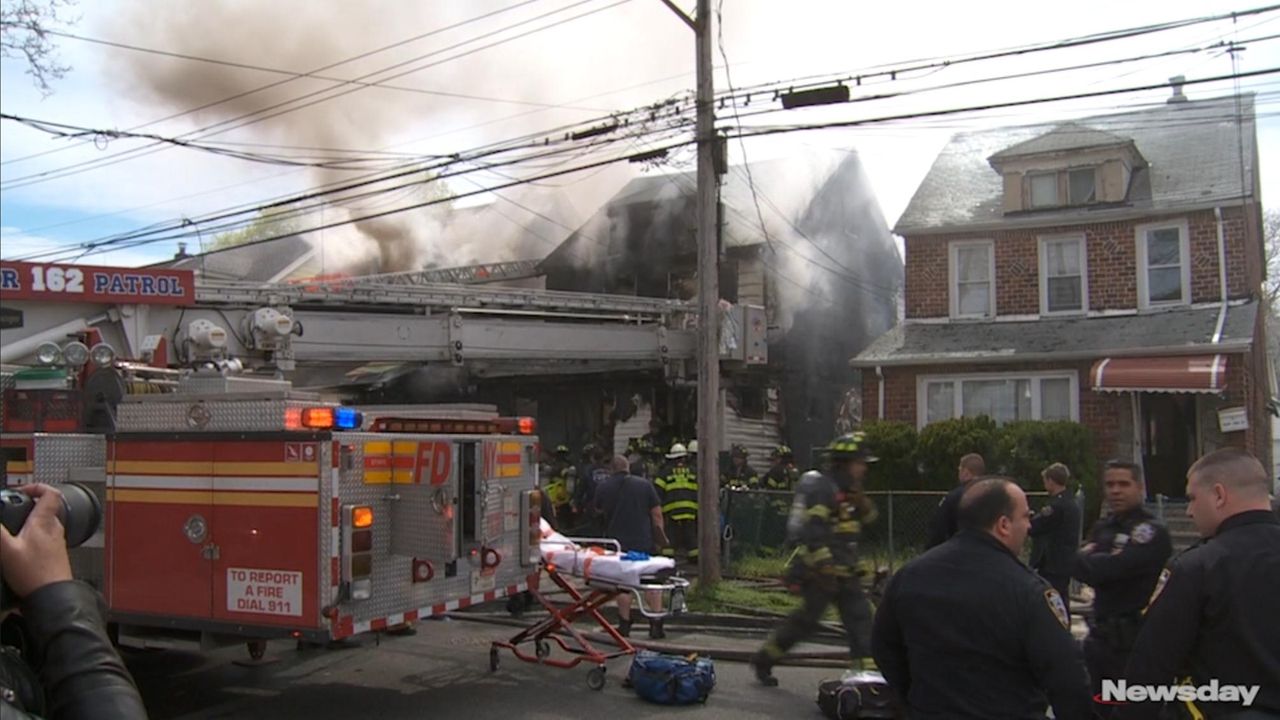 Officials: 5 killed in Queens Village house fire Firefighters on Sunday, April 23, 2017, worked to extinguish a deadly fire in a two-story private building in Queens Village, officials said. The fire, at 112-16 208th St., extended to a neighboring building, officials said. As of Sunday afternoon, the cause of the fire was unknown, according to the fire department's public information officer. Thirty-nine units and 168 personnel fought the blaze, which was declared under control at 4:25 p.m., officials said. Credit: Jim Staubitser

“We don’t have all the answers that we want to have about what happened here,” Mayor Bill de Blasio said in a news conference at the scene. “We do know five lives have been lost, including some young children. And our hearts go out to this family, and I’m asking all New Yorkers to keep this family in your prayers. This is a devastation of a family we rarely see but it has happened in Queens Village today.”

The fire in a two-floor building on 208th Street first reported at 2:36 p.m., extended to a neighboring building, FDNY officials said. A single family lived in the house, de Blasio said.

Fire marshals were working to determine a cause.

“There’s a lot we need to know about what happened here, especially the fact that this happened in the middle of an afternoon on a day when the weather was good,” de Blasio said. “There are many unanswered questions and our fire marshals will get to work on that.”

The fire represented the worst loss of life in a single blaze since a house fire in the Midwood area of Brooklyn killed seven children in March 2015.

“This is a terrible time for this block, for this community, for our entire city when we see people lost in such a fashion,” FDNY Commissioner Daniel Nigro said at the news conference.

Thirty-nine FDNY units and 168 personnel fought Sunday’s blaze before it was declared under control at 4:25 p.m., officials said.

“We received a call from a passing motorist who saw fire on the first and second floor of this home and saw someone come to the window and tumble out from that window out onto the setback and onto the lawn,” Nigro said.

Firefighters arrived four minutes later and “were met by a house completely consumed by fire,” he said, adding that the crew saw the blaze had spread to the house next door and immediately called a second alarm, Nigro said.

“They valiantly pushed in behind the hose lines,” he said. “Unfortunately they recovered all the people from there. None of the five people in the home survived.”

One person, an adult who lived in the house, “tumbled” out of a second-floor window and survived, de Blasio said. A law enforcement source said the 46-year-old man was taken to Queens Hospital Center to be treated for smoke inhalation and a cut to his hands.

He was later identified as Maurice Matthews, the grandfather of the 2-year-old and the father of the 10-year-old, a law enforcement official said.

“These homes were built 97 years ago. They’re wooden-frame homes and they are — they burn rapidly,” Nigro said about how quickly the fire spread through the structure.

Foster McPhee, 67, said he was driving to the store from his Queens Village home when he saw heavy smoke and flames coming from the 208th Street home. He stopped and got out of his car — only to see a firefighter carrying a badly burned young child from the “very intense” fire.

“It was just really bad,” McPhee said. “I was just praying for them.”

Firefighters leaving the home gasped for air and some shed tears, said McPhee, who spoke at the intersection of 208th Street and 112th Avenue, near the scene of the fire where dozens of FDNY and NYPD officials converged late Sunday afternoon. “Some of the firemen were crying, just very moved by the situation,” he said.

Nigro said the fire took an emotional toll on many who battled the blaze, some still saddened by the death last week of firefighter William Tolley of Bethpage, who fell five stories from a roof while fighting another fire in Queens.

“Most of our firefighters have families of their own, so I’m sure this is difficult for them. It always is,” Nigro said.

Dorothy Murray, who said she lives across the street and knew the family — sometimes baby-sitting a 2-year-old boy — said flames were shooting from the window and doors, and neighbors ran outside screaming, some crying, but no one could help because the fire was raging.

“It was just too severe, too intense,” said Murray, 72. “I hope I never witness nothing like this again in my life.”

The whole block was thick with smoke and she could feel the heat emanating from the fire, Murray said.

David Buchanan, who lives next to the home that burned, said he was at church with his wife when his teenage daughter called to tell him about the blaze. She was not hurt, but flames apparently jumped to his home, charring and melting some of the yellow siding, he said.

Buchanan described his neighbors as a “big family” with young children.

“It was like something out of a movie. There were so many firefighters out there,” said Tiasha Johnson, who lives in the neighborhood. “They tried to fight the fire but it was out of control. They were trying to get the people out of the house but they couldn’t get in fast enough to get them out.”

Denise Coleman lives about a block from the fire and said she saw a man she believes is the children’s uncle trying to get into the house to rescue the victims.

She later heard him say he was cold, so she brought him a cup of tea and a sandwich.

With William Murphy and Michael O’Keeffe