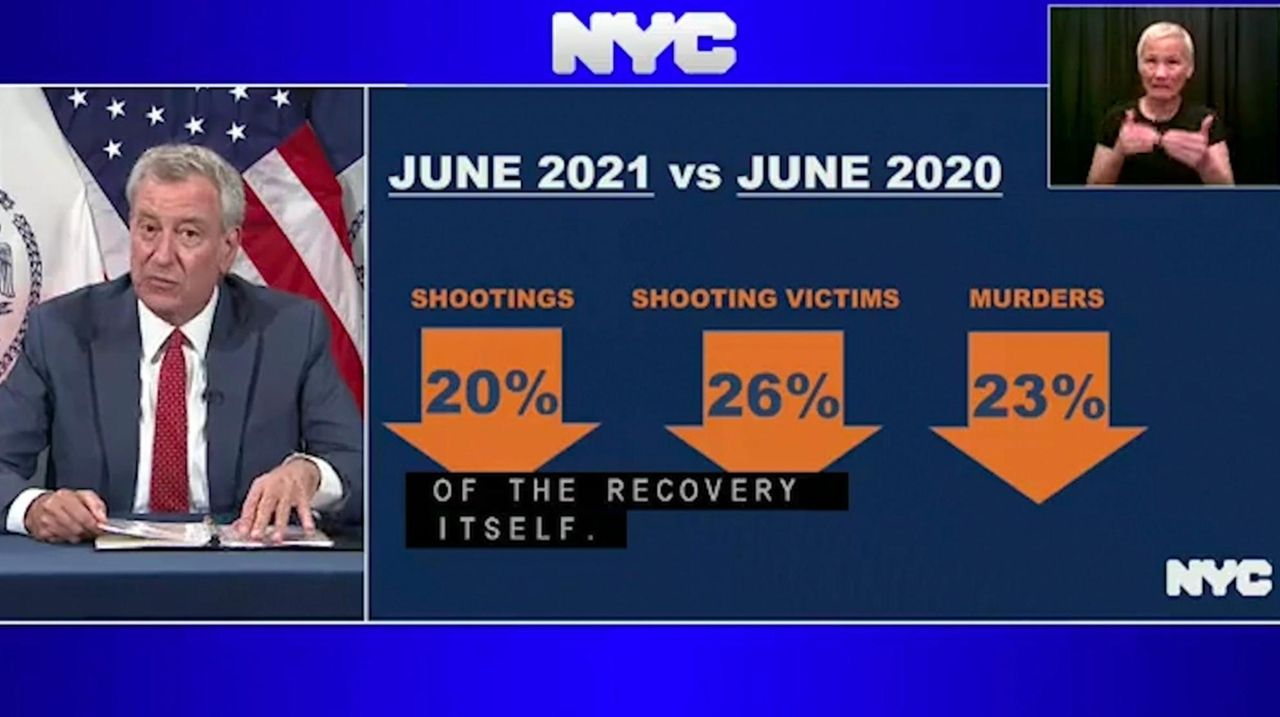 Mayor Bill de Blasio on Tuesday said there was a drop in shootings in June compared with the same month in 2020. NYPD Commissioner Dermot Shea attributed the drop to gang takedowns and gun arrests, but he acknowledged that problems remain and there is still work to do. Credit: NY Mayor's Office

Reviewing the month crime data, something only done in news releases in recent months, both leaders noted that shootings in June of this year were off almost 20% from the same month in 2020, and the number of homicides down 23%. But they acknowledged that the overall crime picture for the year still presented problems with shootings up through July 4 by 38% and killings up 8.5% over the same date last year, according to the latest NYPD data.

"A lot more work to come," Shea acknowledged to reporters at the virtual briefing. He attributed the drop in violent crimes to an increase in large takedowns of gangs and crews, as well as 36% more gun arrests. In seven major gang takedowns, police arrested 94 suspects who were responsible for 43 "provable" acts of violence, Shea said.

"That is how we are seeing the gun violence dip down," he said.

Shea also noted that this year’s Fourth of July weekend saw much less violence than last year, a time when the pace of shootings marked an increase that led to 2020 seeing the highest number of shootings since about 2006.

"Last year, we had 45 shooting incidents," said Shea referring to data for the 2020 holiday that included July 5th. "We cut that down to 24. More work to do but we are committed."

So far, shootings in the five boroughs through July 4 totaled 765 compared to 555 in 2020, with 886 victims wounded this year compared to 670 in the prior period. Homicides totaled 217 compared to 200 last year. Overall serious felonies like grand larceny, burglary and felony assault were down about 0.7%, records show.

The release of the June crime numbers, as encouraging as they may be for City Hall and the NYPD, preceded by hours an announcement by Gov. Andrew M. Cuomo declaring gun violence to be a public health emergency, particularly for communities of color, to be addressed by a series of initiatives, including investments of millions of dollars in jobs programs for at-risk youth.

Some short-term measures proposed by Cuomo, including rebuilding police-community relations, an emphasis on de-escalation tactics by police, a data driven targeting of violence hot spots and ordering State Police to team up with neighboring states to stop gun trafficking, are underway in New York City, and have been for years in some cases. The highly touted CompStat data system started in 1994 and the NYPD started its community policing program In earnest in 2016. Last month, the NYPD announced a two-year program to train cops on de-escalating tense situations and a beefed up gun intelligence program with the federal Bureau of Alcohol, Tobacco, Firearms and Explosives.

In terms of New York City crime, the violence, while down overall in June, has not been true for the Bronx where shootings jumped 125% last week.