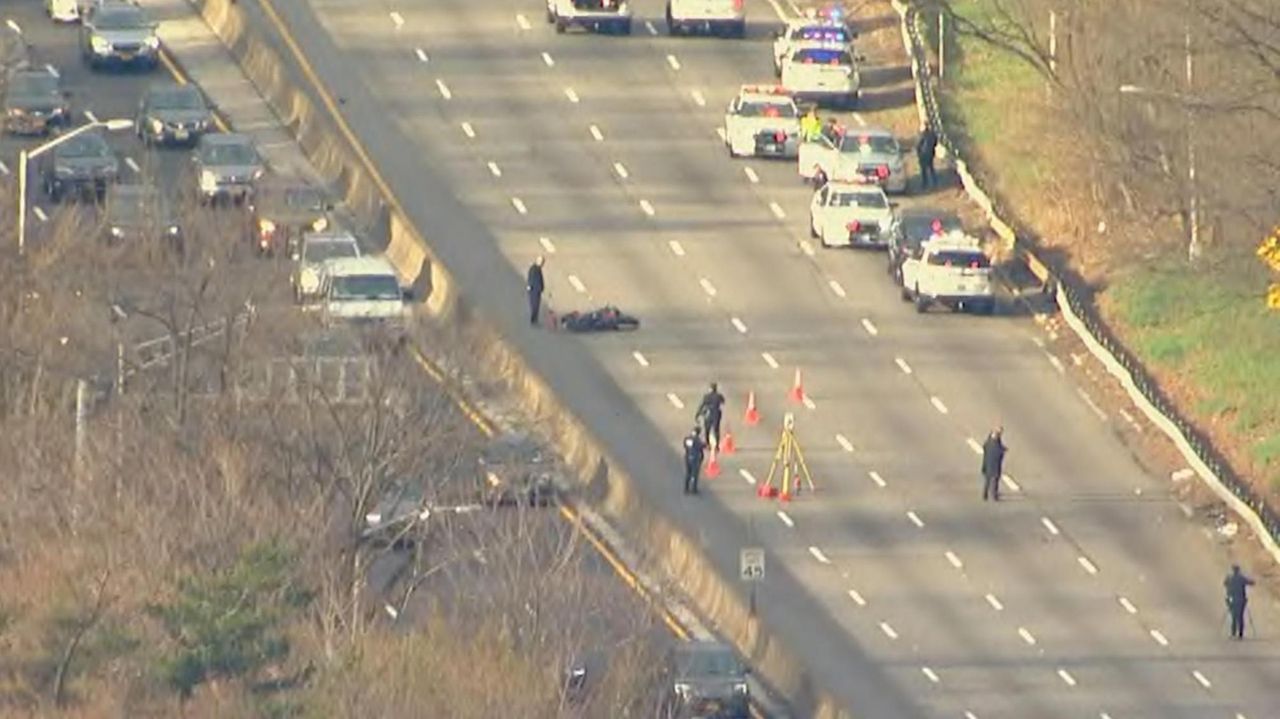 An off-duty New York City police officer was killed Thursday morning in a crash on the Laurelton Parkway in Queens, according to the NYPD. Credit: News 12 Long Island

This story was reported by Stefanie Dazio, Anthony M. DeStefano, Deon J. Hampton, Deborah Morris and Chau Lam. It was written by DeStefano.

A veteran NYPD highway officer and married father of five from Elmont was killed early Thursday in a motorcycle crash on the Laurelton Parkway in Queens as he rode to work, officials said.

Officer Marc St. Arromand, 42, was pronounced dead at a hospital after his 2011 Yamaha motorcycle was upended on the highway adjacent to 132nd Street in the Laurelton section, according to the NYPD. Investigators believe St. Arromand’s motorcycle may have struck debris on the pavement before the crash, a police spokesman said.

St. Arromand worked with the NYPD's Highway Unit No. 2, which patrols roadways in Brooklyn and is based at a central location on Flatbush Avenue, according to police.

It is with deep sorrow we announce the passing of @NYPDHighway Unit #2 Police Officer Marc St. Arromand. Our prayers are with his family & loved ones. You will be greatly missed. Rest In Peace. #NYPD pic.twitter.com/soIn9AqJ2q

The veteran officer joined the NYPD in 2005, department officials said.

St. Arromand was traveling south at about 5:30 a.m. on Laurelton Parkway near Merrick Boulevard, when he lost control and was thrown from his motorcycle, said NYPD chief spokesman Phil Walzak in a statement. After St. Arroman struck a metal guard, a gray, 2017 Chevrolet Camaro hit the officer, Walzak said. The male driver, 53, was not identified. He remained at the scene, Walzak said.

St. Arromand was transported to Long Island Jewish Valley Stream Hospital where he was pronounced dead, Walzak said. St. Arromand was riding with a helmet and had his face visor in the proper position when the crash occurred, the spokesman said. The accident is being investigated by the NYPD special Highway Patrol Collision Investigation Squad.

Thursday night outside the hospital's emergency room, St. Arromand's body was placed in an NYPD emergency vehicle and driven to a funeral home. A police escort that included officers on their NYPD motorcycles accompanied the ambulance. Nearby a group of mourners, some saluting, watched in silence. A motorcade of NYPD vehicles, lined up in pairs, drove down Franklin Avenue to honor St. Arromand. Moments later, a small fleet of NYPD patrol cars followed.

A handful drivers in the police vehicles honked horns, a final salute to one of their own.

Earlier at an unrelated event, Mayor Bill de Blasio offered his condolences to the officer’s family and asked those gathered to stop and remember St. Arromand with a moment of silence. The mayor said news of the officer's death made it a “very painful day for all of us.”

Outside the officer's two-story home in Elmont on Thursday afternoon, three men gathered but declined to comment other than to ask for contributions to a GoFundMe page set up in St. Arromand's name.

A neighbor of St. Arromand said he saw the officer Wednesday night at Howell Road Elementary School in Valley Stream where they watched their children perform in a spring concert.

“We said ‘hi’ and a few other things,” Sunil Kublall said in a phone interview. “He was a very nice man, good father, family man. He took good care of his property and always waved and said 'hi.’ "

Kublall said St. Arromand and his family moved into the neighborhood about four years ago.

“It was very disturbing to hear the news earlier,” Kublall said. “I don’t think anyone in the neighborhood would have anything bad to say about him.”

Officials said funeral arrangements for St. Arromand, who was originally from Haiti, were pending but are expected to include full honors due an active duty officer.