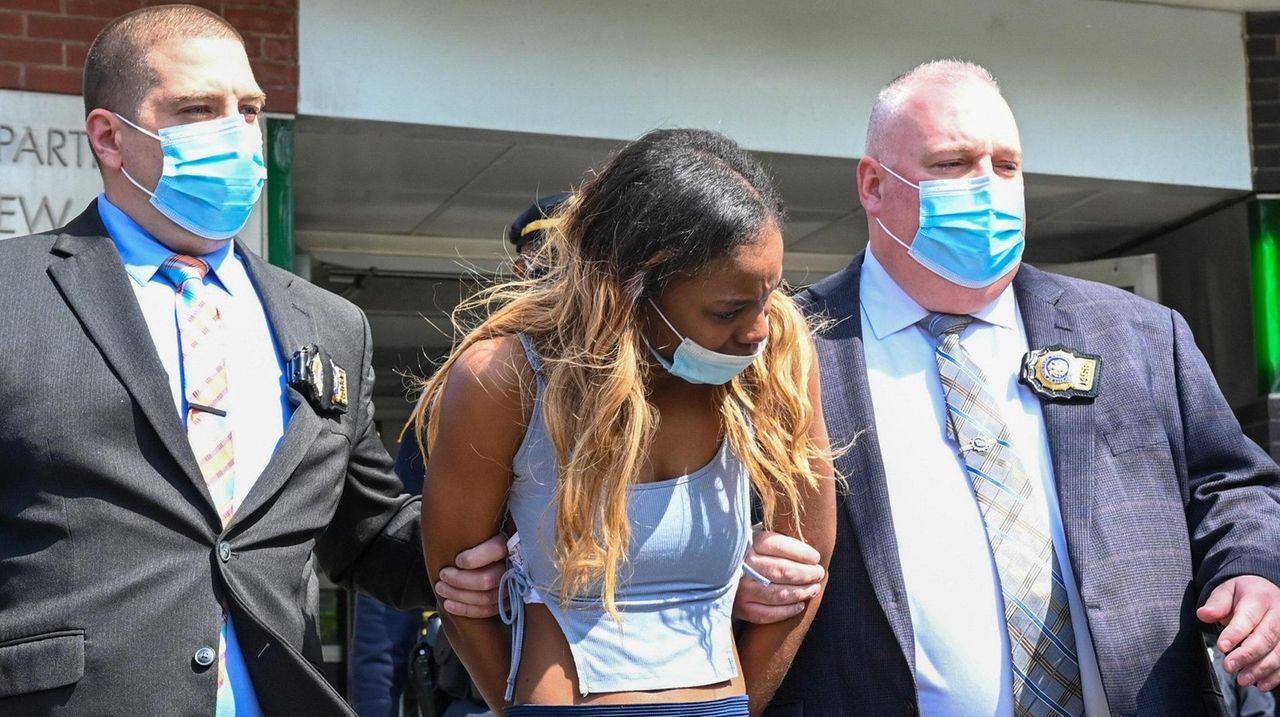 An NYPD highway officer died after he was struck by a hit-and-run motorist on the Long Island Expressway near Francis Lewis Boulevard in Queens on Tuesday, police officials said. Here is Newsday's Chelsea Irizarry with the report. Credit: Newsday staff; Photo Credit: Tsakos family

A veteran NYPD officer from Long Island — described by police as "the best of the best" — was struck head-on and killed early Tuesday on the Long Island Expressway in Queens by an alleged drunken driver with a blood alcohol content nearly twice the legal limit, authorities said.

NYPD Highway Patrol Officer Anastasios Tsakos, a 14-year member of the force from East Northport, was directing traffic at the scene of a separate fatal crash when he was struck by the alleged drunken driver from Hempstead who fled the scene and rammed a police vehicle before being arrested, authorities said.

Tsakos, 43, a father of two young children, was "thrown in the air" after being struck by the driver, a 32-year-old woman whose blood alcohol content was 0.15% — above New York's 0.08% legal limit — when she was tested more than two hours after the crash, according to Queens District Attorney Melinda Katz.

Jessica Beauvais, who authorities said was also driving on a suspended license and speeding, has been charged in a criminal complaint with 13 counts, including second-degree aggravated manslaughter and vehicular manslaughter.

A handcuffed and masked Beauvais apologized tearfully as police detectives escorted her out of the 107th Precinct in Fresh Meadows, Queens, for her arraignment.

"I'm sorry," Beauvais said in response to a reporter's question about what message she had for the officer's family. "I’m sorry that I hit him and that he’s dead."

Beauvais told reporters she had been recording a podcast before the fatal accident.

Jorge Santos, her Legal Aid attorney, sought $50,000 bail, which Hartman rejected, citing the defendant's "flight and evasion" after she allegedly struck Tsakos in a collision that, according to prosecutor Bryan Kotowski, threw the cop at least 100 feet. Relatives of Beauvais sat in the back of the courtroom for the arraignment but left afterward without commenting.

Tsakos' death is the first NYPD line-of-duty death this year, the NYPD said.

Speaking at the hospital early Tuesday, NYPD Police Commissioner Dermot Shea said Tsakos' colleagues described him as "the best of the best" in the police department and "a person that would never ask why, just 'what do you need done?'"

Shea said the NYPD was "devastated" and "shattered" over Tsakos' death. The crash, Shea said, was precipitated by a "senseless and completely avoidable chain of events."

Speaking on Channel 11 morning news show Wednesday morning, Shea said that funeral details for Tsakos were being worked out and that the funeral was expected to "probably be early next week."

Tsakos is survived by his wife, Irene, a 6-year-old daughter and a 3-year-old son, officials said.

"They will never see their father again because somebody did the wrong thing," Mayor Bill de Blasio said. "Just so much pain. Please, everyone realize, this family will never be whole again."

De Blasio pledged: "We will do everything we can to support these children, to support this widow — but it won’t be enough."

Tsakos had been directing traffic off the expressway near Francis Lewis Boulevard after a fatal single-car accident that occurred about 12:30 a.m., closing eastbound lanes of the LIE, police said.

In that crash, police said Jonathan Espinal, 24, of Queens, was on the eastbound LIE exit ramp to the Clearview Expressway when his 2012 Infiniti with two passengers struck a utility pole and its engine caught fire. Officers responding to the fiery crash "rushed toward that car, broke the window and pulled people out of the car," Shea said. The rear passenger died, police said.

Espinal was driving with a suspended license and was charged with aggravated unlicensed driving, police said.

The three occupants of the vehicle were taken to North Shore Long Island Jewish Hospital. Espinal and a 19-year-old front passenger were listed in serious but stable condition, police said.

The rear passenger who died was a 26-year-old man. Police did not identify the two other occupants.

At about 1 a.m., Beauvais, driving a 2013 Volkswagen Passat "swerves to avoid vehicles and then strikes Officer Tsakos who was standing in the roadway next to his marked police car," Shea said.

Police "surrounded" Beauvais' vehicle, but she then "attempted to flee the scene by placing her car in reverse and ramming the police vehicle behind her twice before coming to a full stop," Katz said.

Beauvais was arrested. She smelled like alcohol and appeared to be intoxicated, according to charging documents.

Shea said the driver must have known she had been in a collision: "I think when you see images of her car, and the windshield that was completely shattered. There is no way not to know you struck an individual."

Beauvais, in addition to the manslaughter counts, is also charged with DWI, leaving the scene of an incident without reporting/death and reckless driving. If convicted, Beauvais faces up to 15 years in prison.

According to the court papers, Beauvais told a detective:

"I drank two glasses of wine earlier today and then dropped my son off in Hempstead. I smoked a joint last night before my podcast that I did in Brooklyn ... I brought the bottle of wine I had with me into the podcast. I had two shots of 1800 Patron. When I left I didn’t know where I was going so I used my GPS. I made a left turn and a right turn and ended up at a gas station where the cops stopped me. I don’t know why they stopped me, speeding I guess I did hear a thump so I knew I hit something but I didn’t see what it was."

Beauvais fled with her windshield caved in and a safety cone dragging under her car, according to Kotowski.

At Highway Patrol Unit No. 3 in Queens, the police station off the Grand Central Parkway where Tsakos had worked, blue and black bunting was hung over a door Tuesday. Police officers could be seen greeting one another.

"An NYPD officer for 14-years, Officer Tsakos was a loving husband and father who was raising his family here in Suffolk County," Bellone said.

"This devastating news serves as a chilling reminder that law enforcement personnel leave their homes each day to protect and serve, not knowing what dangers and difficulties await them. Police Officers are called upon to assist their neighbors, save lives, and solve crimes in some of the most challenging situations imaginable day and night to protect and serve our communities."

Town of Huntington Supervisor Chad A. Lupinacci said in a statement Tuesday that he directed all flags on town properties be flown at half-staff to honor Tsakos.

"Officer Tsakos was taken from his family and our community far too soon, making the ultimate sacrifice while answering the call of duty," Lupinacci said.

Tsakos joined the NYPD in January 2007 and was assigned to Highway Unit 3 in August 2014, the NYPD said.

Patrick Lynch, president of the Police Benevolent Association of the City of New York, said that in addition to being "a cop’s cop," Tsakos was known as "a good guy."

De Blasio began his daily briefing Tuesday with a moment of silence to honor Tsakos, whom he called "the epitome of a family man."

"Commissioner Shea and I spent time with Anastasios’ wife Irene, who was just going through hell and spoke from the heart about the pain she was feeling. Just to think two children who will not be seeing their daddy again. It was just horrible," de Blasio said.

De Blasio also noted that the drivers in both crashes have been accused of breaking of the law.

Police unions for Suffolk and Nassau both issued statements.

"We extend our sincerest condolences to the loved ones and family of Officer Tsakos, and all those within the NYPD family who are grieving this loss," said James McDermott, president of the Nassau County Police Benevolent Association.

Suffolk Police Benevolent Association president Noel DiGerolamo said Tsakos had made the "ultimate sacrifice" and that his organization "stands united with the Tsakos family along with our grieving brothers and sisters in the NYPD, today and always."