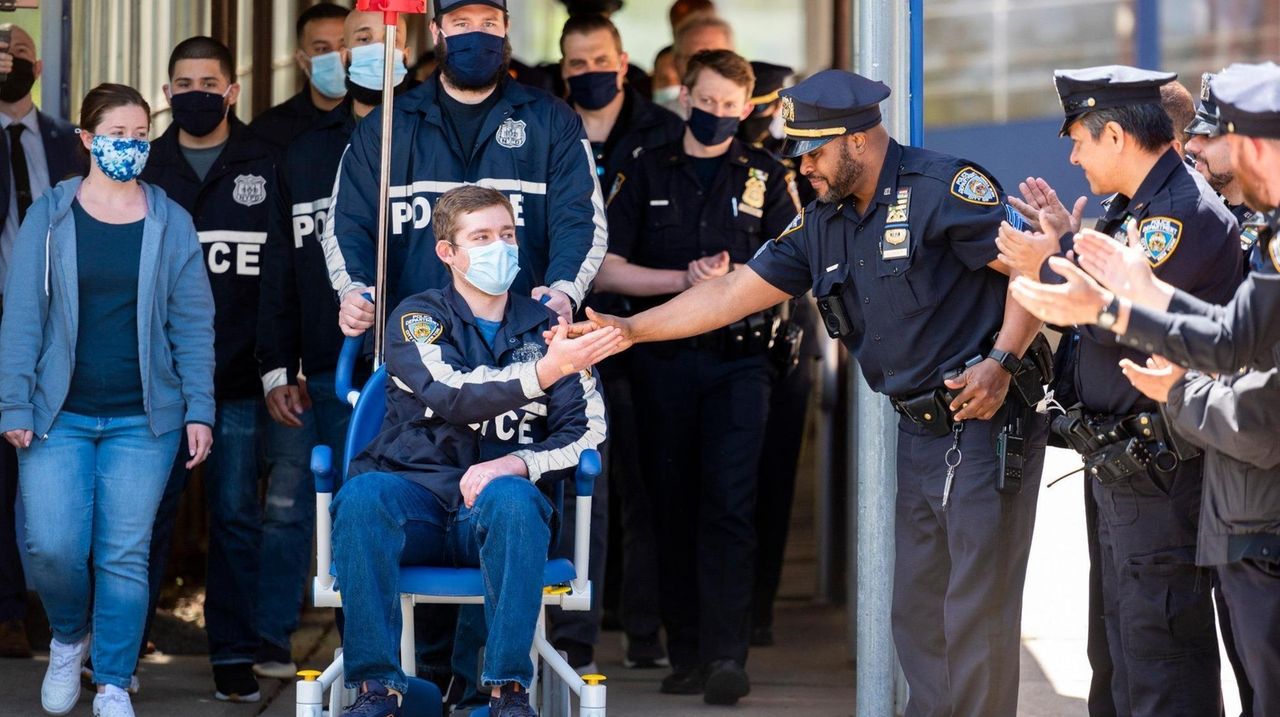 NYPD officer Brian McGurran on Thursday was wheeled down a ramp from the pickup entrance at Kings County Hospital, where he was greeted by hundreds of applauding and cheering cops. Credit: Newsday / Matthew Chayes; Corey Sipkin

Hours after doctors patched up his bullet wounds, an NYPD cop from Smithtown walked out of a Brooklyn hospital Thursday to cheers from hundreds of fellow officers after escaping death or serious injury because of his bulletproof vest.

Officer Brian McGurran, 28, was shot at about 11:15 p.m. Wednesday after he and two fellow uniformed cops confronted a man on the streets of Bedford-Stuyvesant by Saratoga Park, the NYPD said. The suspect, identified by police as Boyce Hayward, 26, suddenly fired at McGurran and the other officers after they exited an unmarked police vehicle, police said.

At a news conference early Thursday at Kings County Hospital, NYPD Commissioner Dermot Shea expressed thanks that McGurran’s protective vest prevented him from possibly being killed in line of duty.

"It is by the grace of God that we are not about to start planning for a second funeral in one month," said Shea, in a reference to the April death of NYPD Officer Anastasios Tsakos of East Northport. Tsakos, 43, was struck and killed by an alleged drunken driver on the Long Island Expressway in Queens as he directed traffic from an earlier crash. 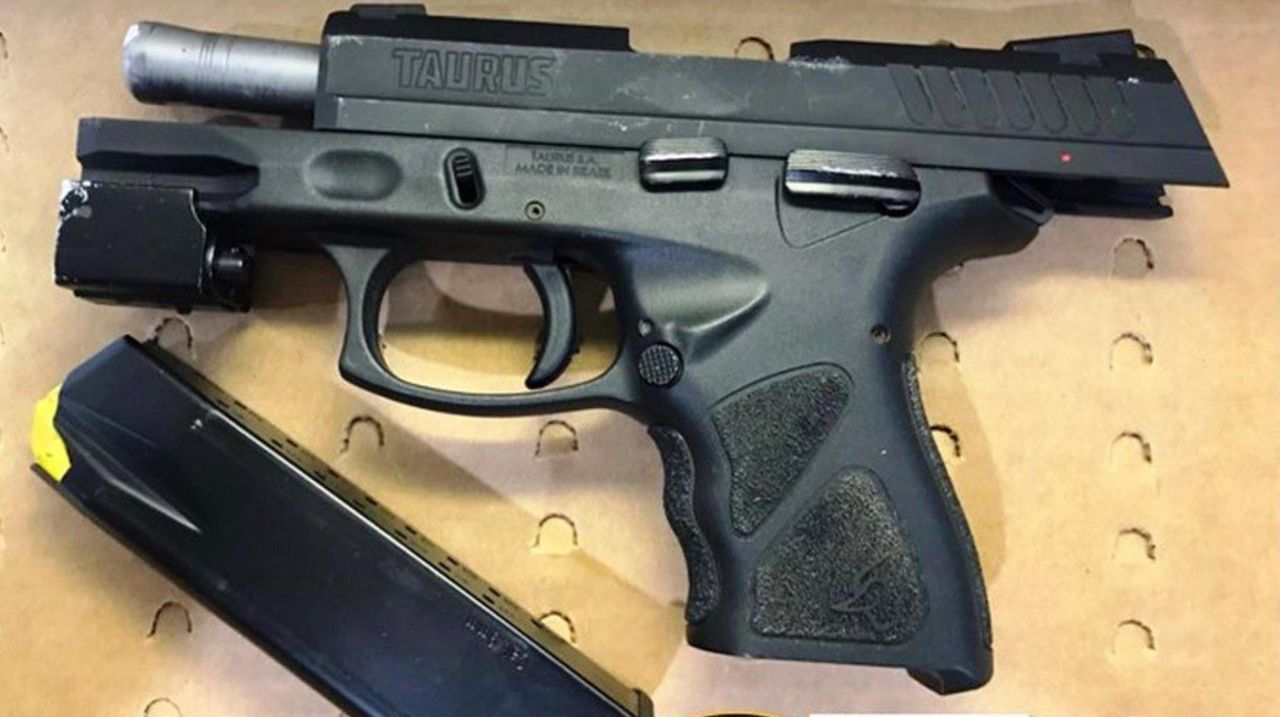 NYPD officer from Long Island shot in Brooklyn An NYPD cop was shot three times in Brooklyn on Wednesday, including once in his bulletproof vest, according to Police Commissioner Dermot Shea. Credit: Corey Sipkin

Shortly after noon Thursday, McGurran, in a wheelchair, was guided down a ramp at Kings County Hospital. Then, as applause continued, a smiling McGurran stood, gave a thumbs-up and walked to a waiting vehicle, presumably to be taken home to Long Island.

Hayward shot McGurran, who's been a member of the department for four years and assigned to the 81st Precinct, once in the buttocks and once in the right leg, with a third round from the 9 mm handgun hitting him in the rear portion of the protective vest that shielded his back, the NYPD said. Meanwhile, McGurran and another officer fired back.

During the exchange, the two officers fired 21 rounds, striking Hayward once in his leg, Shea said. Hayward, who, according to Shea, is a known gang member, was in stable condition at Kings County Hospital Thursday and charges against him were pending. A handgun was recovered at the scene by cops.

About 20 minutes before McGurran was shot, the NYPD said, an acoustical ShotSpotter alert and 911 calls informed cops of a shooting involving a white SUV by Madison Street and Broadway, about four blocks away. Video surveillance captured a man walking up to the SUV and firing at the occupants inside, the commissioner said. The SUV kept going for a short distance before crashing. The driver was dead, one passenger suffered nonfatal wounds, and a second escaped injury, Shea said.

All three men in the SUV had pending gun cases and were suspected gang members, according to Shea.

McGurran and the other two officers were part of a special crime patrol in the area of Saratoga Park following a nonfatal shooting Tuesday night, police said. The patrol's aim was to beef up a police presence and reduce any chances of further violence, according to the NYPD.

NYPD Deputy Inspector William Glynn, who is in charge of the 81st Precinct, said police are still investigating whether Hayward is connected to the earlier fatal shooting. Asked if Hayward knew the three officers were cops and whether they had announced themselves, Glynn said, "I can’t speak to what was in his mind. … The officers were in uniform at the time."

McGurran, who is married, joined the NYPD in April 2017 and comes from a family of officers: his brother Brendan is a cop in the 19th Precinct in Manhattan and their father, John, is a retired NYPD detective, police officials said.

Neither McGurran, his brother nor his father immediately returned telephone calls for comment Thursday.

The shooting was the second time an NYPD cop from Long Island was saved from serious injury in recent months by a protective vest. On Christmas Eve, Officer Connor Boalick was saved when his vest prevented a bullet from penetrating his skin.

McGurran’s shooting was the latest in a dramatic upsurge in New York City gun violence that Police Benevolent Association president Patrick Lynch bemoaned as creating an atmosphere of violence.