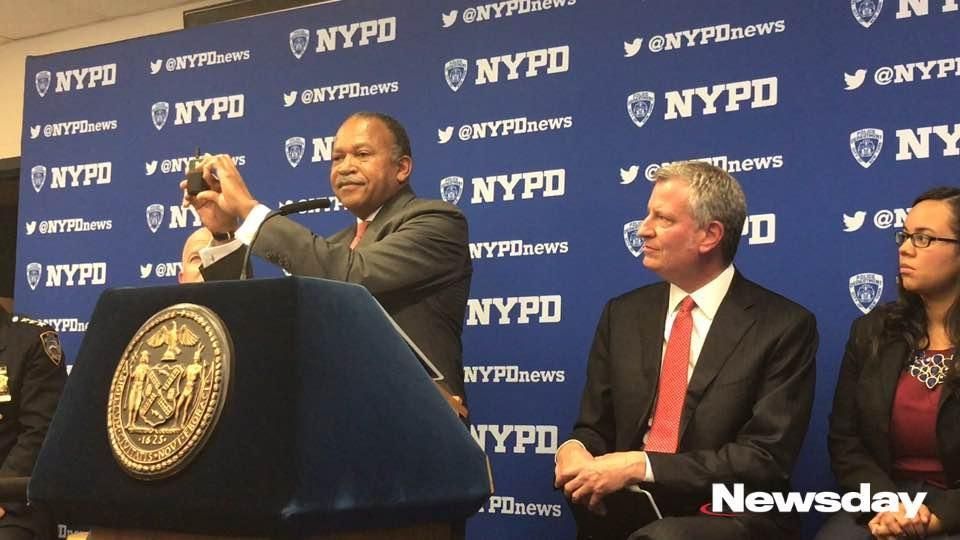 NYPD First Deputy Commissioner Benjamin Tucker displayed how to operate a body camera and showed training footage on April 27, 2017, as the police department rolled out a pilot program at the 34th Precinct in Washington Heights, where select officers will wear the devices. (Credit: Newsday / Matthew Chayes)

More than 50 NYPD officers in Washington Heights hit the streets Thursday wearing miniaturized body-cameras, the vanguard of a long-anticipated pilot program that officials expect will lead to all 22,000 city patrol cops wearing the devices by the 2020.

As news reporters and photographers watched shortly after 3 p.m., 10 uniformed officers from the 34th Precinct filed out of their station house roll call, climbed into five police vehicles, and drove off on patrol.

Other cops, also sporting the small cameras attached to the front of their uniforms, drove out from a precinct parking area. A total of 58 cops from the precinct have been selected to wear the cameras, which are black and smaller than a pack of cigarettes.

‘This is a historic day for New York City,” Mayor Bill de Blasio said at a news conference after the roll out in the station house. “This is the first day of the era of body-worn cameras and that means we are going on a pathway of transparency and accountability that will benefit everyone.”

DeBlasio said that cameras will help what he said was a continuing trend of bringing police and communities closer together.

The 34th Precinct, located in an ethnically-diverse neighborhood with the largest Dominican population in the city, is the first of 20 precincts to get some of the nearly 1,200 cameras this year in the pilot program. The next precinct scheduled to get the body cameras is the 60th Precinct in South Brooklyn near Sheepshead Bay.

The city initiated the camera program as a result of a 2013 federal court decision in litigation over the NYPD’s use of stop-and-frisk procedures. In finding that police officers employed the tactic unconstitutionally against minorities, Judge Shira Scheindlin came up with various remedies. Among them was having police officers experiment with body cameras as a way of defusing tensions and providing a method of accountability.

Police officials, including O’Neill, acknowledged Thursday that the pilot program is a work in progress and has faced been some opposition. Some civil rights advocates have said the program doesn’t require police to record enough of their encounters with the public. The advocates, who unsuccessfully tried to block the program rollout last week in court, also had issues with officers having the right to view recorded encounters with the public before making statements.

“As we move forward and see that there are tweaks that need to be made, we will do that,” said O’Neill about the criticism. “Have faith. Everything we do is to build trust and make this city safe.”

O’Neill added that the goal of having police officers wear body cameras “is get to the truth.

First Deputy Commissioner Benjamin Tucker said the project was an experiment that will undergo constant evaluation by the NYPD and federal court monitor Peter Zimroth, who is overseeing stop and frisk litigation reforms.

While the Patrolmen’s Benevolent Association agreed to body-worn cameras in settling its recent contract, other police unions voiced objections and indicated they might go to court. But a police labor official who asked not to be named said the other unions have agreed that the issue of cameras for higher ranked officers and detectives will be the subject of collective bargaining in the future.