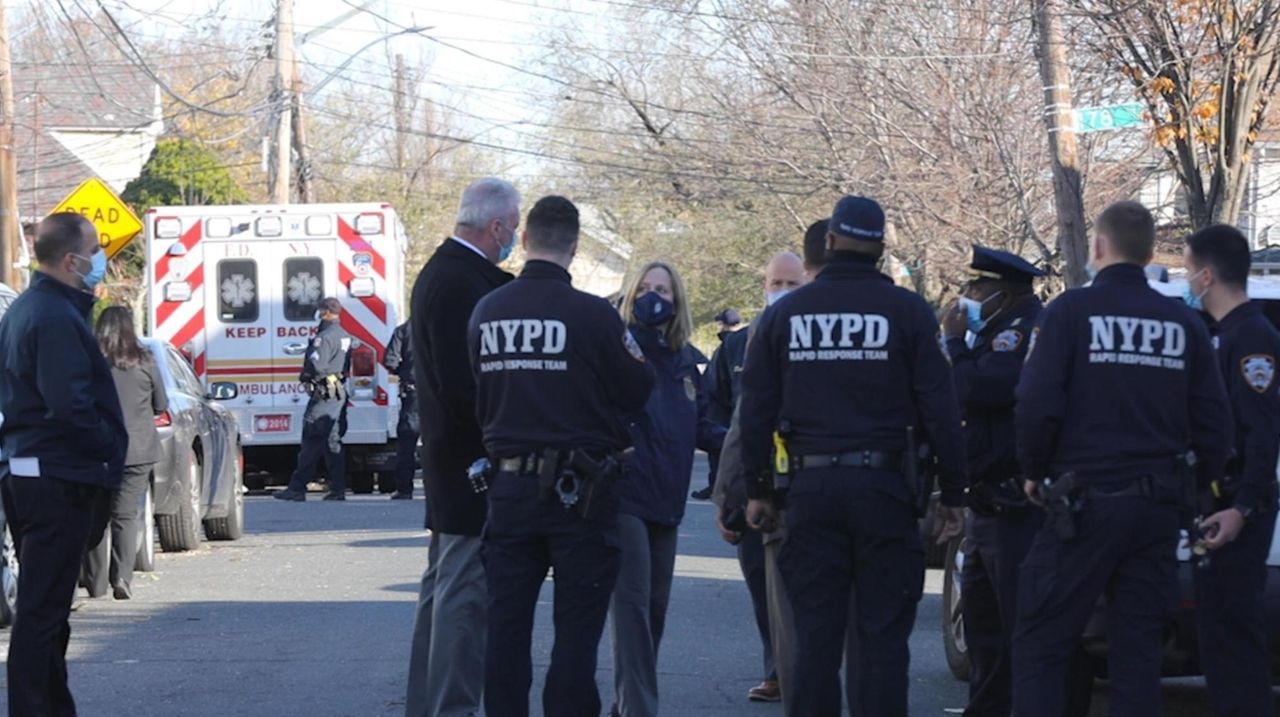 Two NYPD officers were shot responding to a domestic dispute in Queens. They are expected to recover, officials said. The suspect was shot and killed. Credit: NYC Mayor's Office and Howard Schnapp

Two NYPD officers were wounded and a suspect was killed in a gunfight in Queens Tuesday that began when the officers accompanied a woman home after she reported a domestic incident, NYPD officials said.

The two officers, who are expected to recover, are from Long Island, according to law enforcement sources. They are Christopher Wells of Suffolk County and Joseph Murphy of Nassau County, the sources said.

"Thank God they are going to pull through," said Mayor Bill de Blasio at a news conference outside Jamaica Hospital Medical Center, where the officers underwent surgery.

The suspect, who was pronounced dead at the scene, was identified as Rondell Goppy, 41, a peace officer with the City University of New York. Goppy has been listed as a "crime prevention specialist" on the CUNY website.

NYPD Commissioner Dermot Shea said there had been prior calls to the house for domestic incidents. Shea said the shooting took place after a 41-year-old woman walked into the 105th Precinct station house Tuesday morning to report a domestic violence incident that took place Monday night.

At about 12:40 p.m., she returned to her residence on 179th Street in Springfield Gardens with two domestic violence officers.

Goppy was not at home when they arrived, but about six minutes later he returned and began shooting at the officers "almost instantaneously," Shea said.

Police opened fire on Goppy and he was hit multiple times, Shea said. The woman was not injured.

Goppy and the woman have been together 24 years, married 17 years and lived at the home for 15 years, Shea said. They have children who were not home and police have been called to the house multiple times for domestic incidents.

Police recovered two handguns at the scene and a third weapon not at the scene. Goppy had a license to have the firearms.

"Here we have a situation where a woman is in danger and these officers went to protect her only to find themselves in danger almost immediately," said the mayor. "They saved that woman’s life. I want to be crystal clear. Because those officers were there, that woman is alive and I say God bless them."

Officials from the Nassau and Suffolk police unions put out statements supporting the officers and extending prayers for their full recovery.

Nassau County Police Benevolent Association President and former NYPD Officer James McDermott said in a statement Tuesday: " … Police officers put their own safety in jeopardy for the safety of others, and we must applaud them for the true, everyday heroes that they are."