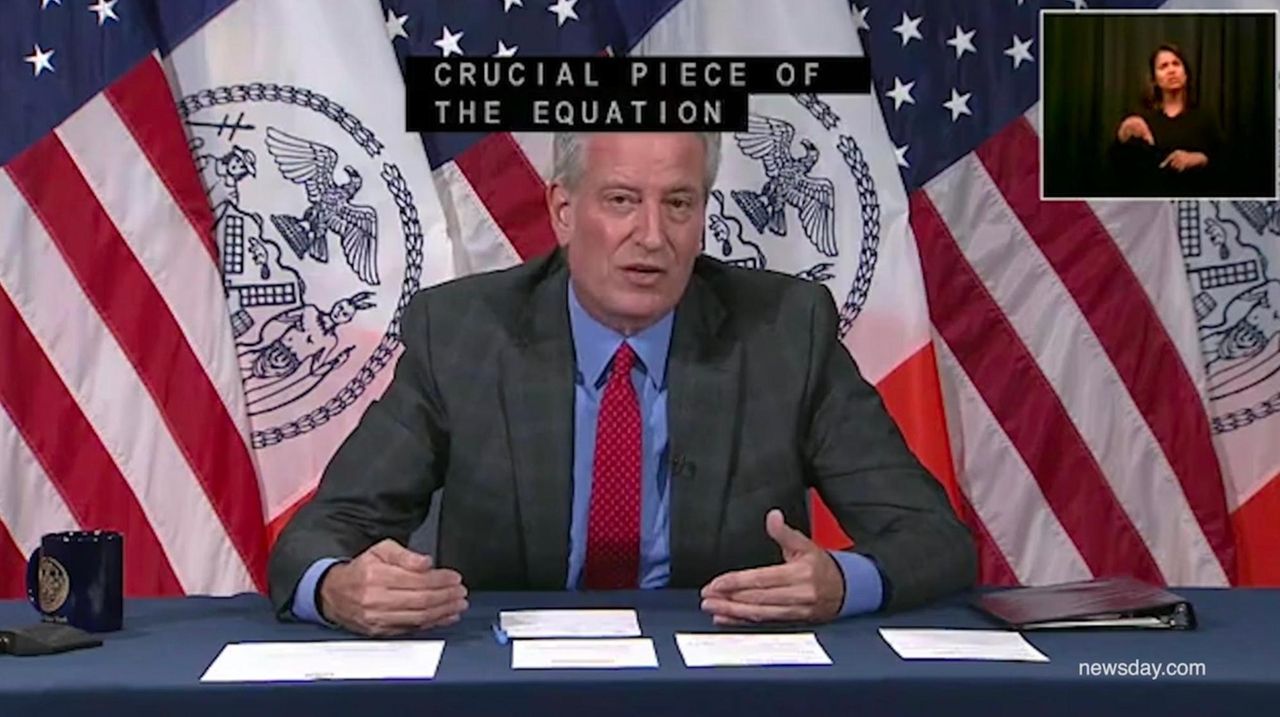 Mayor Bill de Blasio said the sudden uptick in shootings across New York City is due to "a perfect storm" of "many, many factors," including the lack of a functioning court system. Credit: NY Mayors's Office

Another bloody weekend of shootings, including 10 homicides, led NYPD Commissioner Dermot Shea to acknowledge Monday that a citywide strategy to quell gun violence had yet to make any tangible headway.

In the three-day period from Friday through Sunday, the city had 29 shootings, 10 of which led to killings, according to the latest NYPD statistics. Fifteen of the shootings occurred on Sunday.

"When we have a day with 15 shootings in New York City that is not a success, there is no other way to put that," Shea said during an early morning interview on NY1.

The Sunday violence pushed the total number of shootings in 2020 to 745, an increase of 73% over the same period of 2019. So far this year, there have been 907 shooting victims. If the current pace of shootings continues, the city may, by the end of the week, meet or exceed the 922 gunfire victims recorded in all of 2019.

Homicides now number 227 compared to 176 last year in the closing days of July, an increase of 28%. Firearms have caused about 75% of this year's homicides, police said.

The latest spike in shootings comes less than two weeks after Shea and Mayor Bill de Blasio announced plans to stem the violence by shifting officers to gunfire hot spots, moving more detectives to investigations and organizing additional gun buyback programs. The plans also included reorganizing the police community affairs bureau to deploy officers to areas with increased violence to work with the communities at the grassroots level.

On July 20, after a weekend that saw 21 shootings and 23 victims in the city, Shea appealed for patience but insisted the department he leads could slow the violence.

He sounded a similarly cautious, but optimistic tone Monday while acknowledging the hurdles due to the ongoing ripple effects of the COVID-19 pandemic, including limited access to courts and the inability to sit grand juries.

“It is a challenge but we will get our arms around it,” Shea said. “There are a lot of resources out there. [Cops] are focused on keeping New Yorkers safe.”

In a separate interview with Newsday, NYPD Chief Michael LiPetri, who heads the office of crime control strategies, said much gun violence involves gang crews, despite NYPD and city efforts to mobilize the communities to stop the shootings.

“Specifically in Brooklyn right now, we are really struggling in some areas, seeing a sharp increase in East New York, Brownsville,” LiPetri said of the spike in gang-related shootings.

Gang crew members carrying illegal guns are not afraid to use them, the chief said. Like the police commissioner, LiPetri said the pandemic has played a role in the resurgence violence; a lack of sitting grand juries in the city has contributed to a backlog of 1,100 open but unindicted gun cases, with some defendants now held in jail following a preliminary hearing.

Defendants are out on the street on their own recognizance in about 40% of the open gun cases, LiPretri said, an indication that gang members see little risk of facing jail on a weapons charge.

LiPetri said officers are also finding a lack of cooperation and obstruction when they try to police large gatherings where guns may be present. While local community groups and cops work together before such gatherings, when problems erupt, NYPD officers can’t do the simple task of asking questions.

“You can’t ask a question any more without being verbally abused,” LiPetri said.