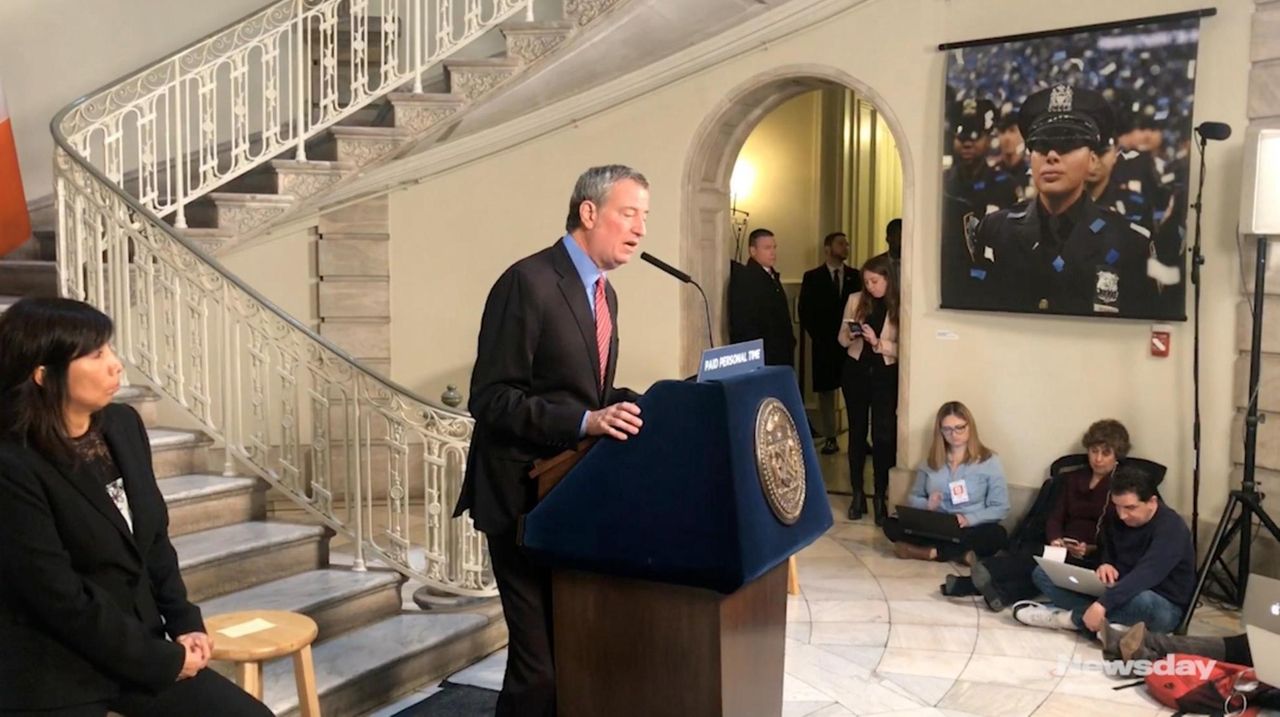 Private employers in New York City would need to give workers at least two weeks' paid vacation, under a law to be proposed, Mayor Bill de Blasio said Wednesday.

Employers with five or more workers would fall under the plan, which would be the first of its kind in the nation, if approved by the City Council, he said. About 500,000 workers in New York City don't get any paid vacation time, he said.

De Blasio said he couldn't provide a cost for the plan, which he hopes is in place by late spring.

"New Yorkers need a break," de Blasio, a Democrat, said at a news conference in the City Hall rotunda.

No paid vacation time "doesn't give them the quality of life they deserve, and that means their families suffer," he said, giving examples of hotel and fast-food workers who would get a new benefit under his law. "It is bad for families. It's bad for your physical health. It's bad for your mental heath. It's no way to live."

Since taking office five years ago, de Blasio has worked to expand what employers must legally grant workers. In 2014, the city began requiring private employers to grant at least 40 hours of paid sick leave. And beginning this year, the State Legislature and Gov. Andrew M. Cuomo, also a Democrat, implemented a minimum wage of $15 an hour for all city workers.

Under the mayor's latest proposal, a worker, whether part- or full-time, would accrue one hour for every 30 hours on the job, said Lorelei Salas, commissioner of the city's Department of Consumer Affairs: Unused time in one year wouldn't roll over and couldn't be cashed out, but a worker with unused time could begin taking vacation the following year immediately without needing to re-accrue.

Freelancers and contractors would not be covered under the plan, she said.

Council Speaker Corey Johnson (D-Manhattan), who controls the flow of legislation, said through a spokesman that he looked forward to reviewing the mayor's proposal.

"It is important that workers in our city have personal paid time off," the statement said.

There has been a similar bill before the City Council, first  introduced in 2014 by Councilman Jumaane Williams (D-Brooklyn), and de Blasio said Thursday he would seek to reconcile his plan with Williams'.

Kathryn Wylde of the Partnership for New York City, a business group, called the plan "another example of municipal overreach into the city’s private sector economy.”

“Most New York City employers are doing whatever they can to attract and keep good workers and do not need the government dictating their benefit policies," Wylde said in an email.

Prashant Bhatt, who owns two Indian restaurants in lower Manhattan, said he might need to lay off one of his 11 or so workers if de Blasio's plan becomes law. He couldn't see himself raising lunch prices beyond the $10 or $11 average lunchgoers in the area are willing to pay. Bhatt said his workers who are employed with him for at least one year get a week's paid vacation currently.

"I like the mayor very much," Bhatt said from behind the counter at Aahar Indian Cuisine down the street from City Hall, "but it's not a good idea to give a 10-day paid leave on top of sick leave, which is paid, and this year we're going to minimum wage of $15. For small businesses, it's not a good idea."

Although there is apparently no municipality in the U.S. requiring paid vacation time, according to the U.S. Bureau of Labor Statistics, 73 percent of civilian workers in the U.S. are given the benefit, most likely to be between 10 and 14 days after a year of service.

Workers in Australia and the European Union must get at least 20 days paid vacation, according to Forbes Magazine.