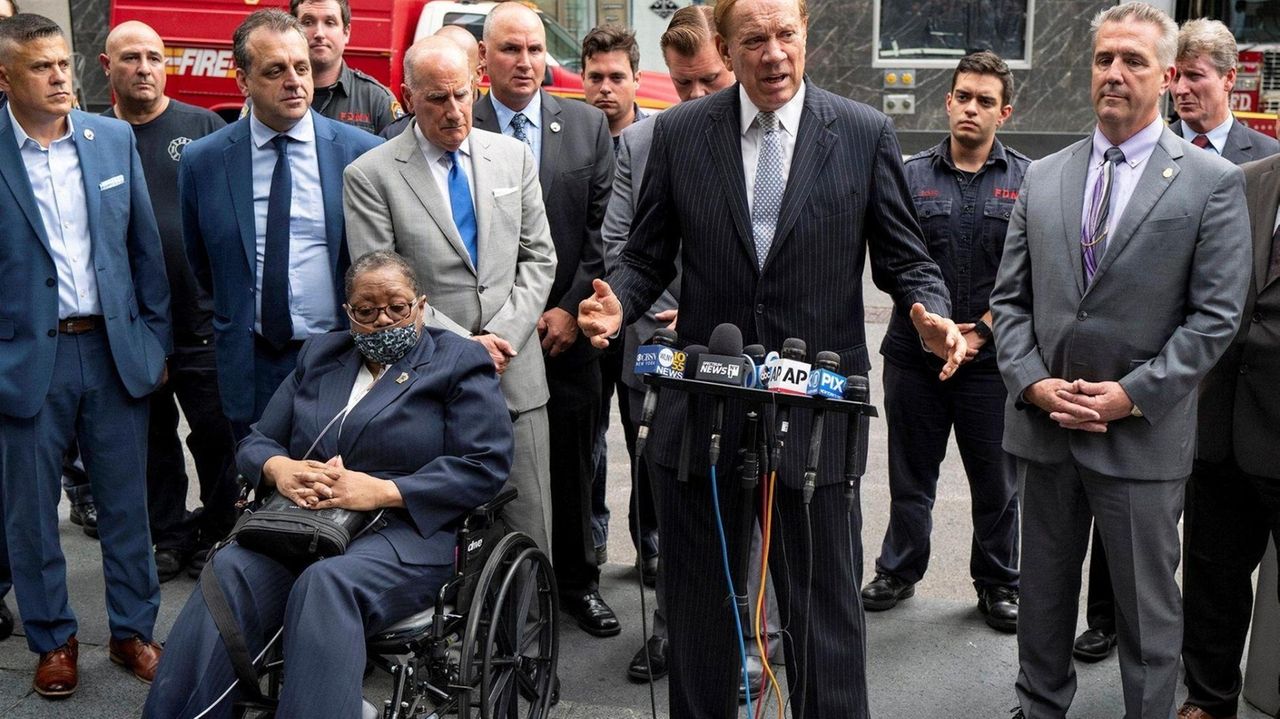 Former Gov. George Pataki and fire union officials held a news conference on Wednesday to shed light on the thousands of first responders who continue to struggle with illnesses believed to be linked to the 9/11 terror attacks. Credit: Craig Ruttle

Twenty years after the Sept. 11, 2001 terror attacks, former Gov. George Pataki and fire union officials Wednesday lamented that thousands of first responders continue to struggle with illnesses believed to be linked to the disaster.

Pataki, a Republican who was governor on the day of the attacks, which killed 2,753 people, including 343 firefighters and 23 NYPD officers, hailed those who risked their lives to respond to the World Trade Center when terrorists used hijacked planes to destroy the Twin Towers two decades ago.

And he renewed calls to ensure first responders would be cared for in perpetuity.

"Just as we can never forget what happened in these horrible attacks, we can never forget those who responded so courageously," Pataki said during a news conference outside the New York Fire Department's Ladder Co. 10 on Liberty Street. "We have to do whatever it takes to make sure that their health is protected, their families are protected, as long as we possibly can."

Uniformed Fire Officers Association president Jim McCarthy and Robert Eustace, vice president of the Uniformed Firefighters Association, both of whom were first responders on Sept. 11, 2001, expressed frustration that they still must continually lobby members of Congress to update the James Zadroga 9/11 Health and Compensation Act and the 9/11 Victims Compensation Fund as first responders are felled by disease. More than 100,000 people are enrolled in programs to assist those made ill from removing debris from the trade center site.

"Every year we add a different cancer to the list of cancers and illnesses that are covered by the Zadroga bill," McCarthy said. "A larger percentage of our fire officers and firefighters are coming down with obscure cancers, some that statistically a very small percentage of the population has."

Barbara Burnette, 58, an NYPD detective from Queens who retired after contracting cancer, struggled with her emotions as she reflected on what 9/11 had done to her and her colleagues.

"It affected us with the illness that has forced us to retire," Burnette said. "It changed everything about my life and what I'm able to do."

Pataki said he drew hope from a chance meeting with a young girl Wednesday when he visited the Sept. 11 memorial.