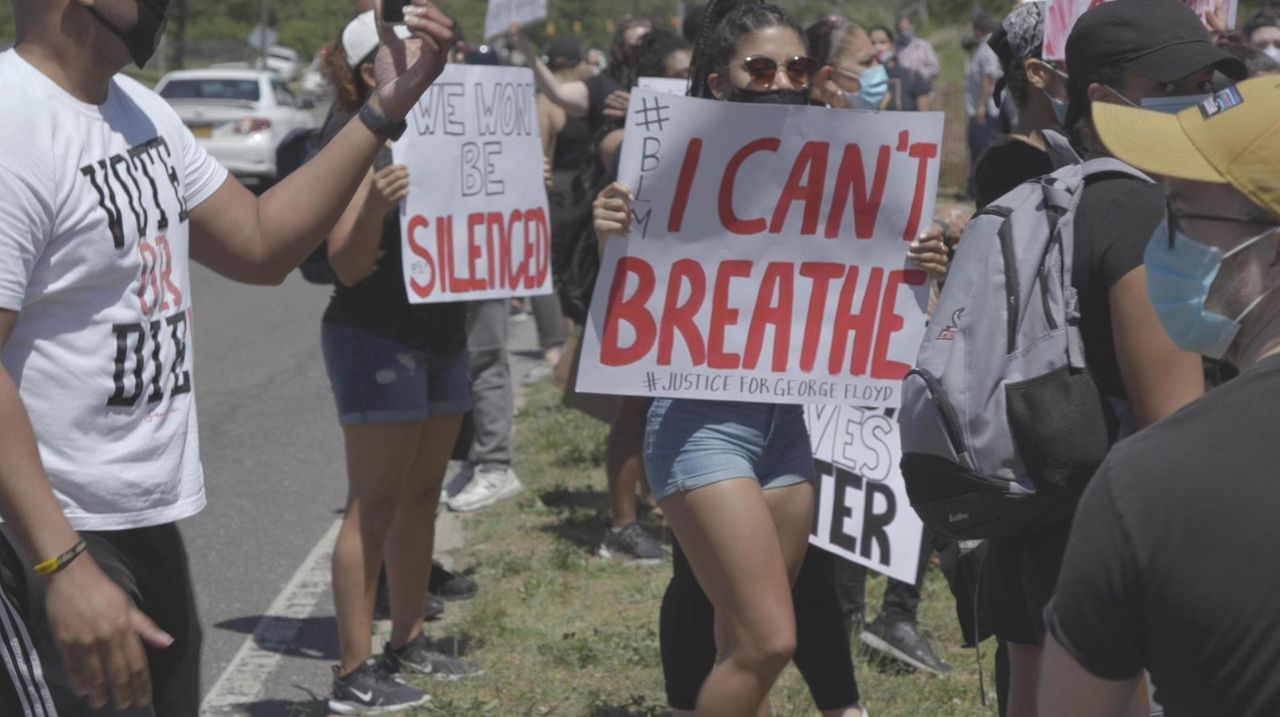 Multiple protests were staged around New York City and in Brentwood on Saturday in response to the police-involved death of George Floyd earlier in the week. Credit: Newsday / Reece T. Williams, Kendall Rodriguez, Craig Ruttle

"Those who are out there to express hatred toward our police officers, we won't tolerate that. If you're out there to commit an act of violence, you're going to get arrested tonight," de Blasio said just before midnight in Brooklyn Heights.

Speaking at the city's emergency management headquarters, the mayor downplayed the number of violent protesters out in city streets, referring to those who committed violence as a "small number."

"Let's remember how few people have been protesting compared to the over 8 million people who live here," de Blasio said, "and it's quite clear that a small number of them aim to do violence, and they're being addressed, they're being arrested, they're being taken off the street."

The mayor's comments came after a night of violence in parts of New York City sparked by the death of Monday of George Floyd, 46, a Minneapolis man who died after a police officer there knelt on his neck for nearly eight minutes, in an altercation captured on video. Floyd's death spurred violent demonstrations Friday in cities nationwide that continued into Saturday and showed few signs of letting up going into Sunday in a country still fighting the deadly COVID-19 pandemic.

On the video, Floyd is heard pleading that he cannot breathe, until he stops talking and moving. The Minneapolis police officer shown in the video kneeling on Floyd's neck, Derek Chauvin, has since been arrested and charged with third-degree murder.

In downtown Brooklyn, hundreds of protesters blocked traffic and chanted “no justice, no peace.”

Advancing protesters in Flatbush forced an NYPD van to retreat backward before they kicked at the vehicle's rear door. An NYPD SUV in Prospect Heights edged into a crowd that had surrounded the vehicle, punching the window and pelting it with bottles. Picketers stormed the Brooklyn Bridge, shutting down traffic into Manhattan, where at least one small fire burned.

De Blasio backed city cops, shown in bystander video Saturday taken in Prospect Heights, striking a group of hundreds with an NYPD SUV that had been surrounded, pelted and was being advanced on by the crowd.

"The video was upsetting, and I wish the officers hadn't done that. But I also understood that they didn't start the situation," the mayor said late Saturday night. "The situation was started by a group of protesters converging on a police vehicle, attacking that vehicle. It's unacceptable. So the officers have to get out of that situation."

De Blasio added: "I'm not going to blame officers who are trying to deal with an absolutely impossible situation."

In contrast, the streets around Fort Greene Park in Brooklyn were largely quiet Saturday night as were the streets in the Bowery in Manhattan.

As of about 9 p.m., 100 arrests had been made, most involving violence against police, said Deputy Commissioner Richard Esposito. There had been some trash can fires in Manhattan, he said.

Earlier Saturday, Gov. Andrew M. Cuomo asked the state attorney general to investigate what happened Friday during violent clashes with the NYPD following Monday’s bystander-recorded death of a handcuffed black man while a Minneapolis cop knelt on his neck.

More than 200 people were arrested and “countless” cops hurt during Friday's protests in Brooklyn attended by about 3,000 people, NYPD Commissioner Dermot Shea said at a news conference.

In one instance, Shea said, an attempted murder charge was filed after a Molotov cocktail was thrown into an occupied, marked police vehicle.

Two sisters from upstate Catskill, Samantha Shader and Darian Shader, are to be prosecuted by the federal government in connection with the attack, according to NYPD spokesman Lt. John Grimpel.

Cuomo, who announced the review during a coronavirus-pandemic briefing in the Bronx, said: “Let’s see if we can learn what was done right, what was done wrong.”

Earlier Saturday, de Blasio said some politicians were pepper-sprayed at the protests, and that he saw other videos of police encounters with civilians that were “deeply disturbing and unacceptable.” And he criticized that some cops were assaulted.

Videos posted to social media NYPD showed cops throwing punches, pushing, pouncing on and dragging protesters, some of whom had charged or thrown objects at the police, or otherwise apparently committed crimes.

There were “numerous” arrests Saturday during protests in Harlem and near Trump Tower, Grimpel said.

Floyd is heard pleading that he cannot breathe, until he stops talking and moving. The cop shown in the video, Derek Chauvin, has since been arrested and charged with third-degree murder.

The review being done by Attorney General Letitia James should be completed within 30 days, Cuomo said.

“Review all the facts. Review the police procedures. Review the crowd’s actions and give us an independent review,” Cuomo said.

In a statement, James’ office said the probe would “ensure that the truth is laid bare, and that there is accountability for any wrongdoing” but did not give specifics.

Patrick Lynch, head of the rank-and-file Police Benevolent Association labor union, said: “Any independent review of last night’s disaster must examine all the ways our elected leaders have helped create this dangerous anti-police climate and all of the ways police leaders have failed to protect officers and the public.”

De Blasio said the large number of cops deployed Friday — thousands, according to Shea — was needed to show “strength in numbers” for what was thought not to be a peaceful protest.

"They were subjected to horrible, vile things last night, and tremendous violence, and that will not stand, because they are working men and women, and any protester that tries to take the humanity away from a police officer and devalue them just because they are a public servant is no better than the racists who devalue people of color and particularly black men in America," de Blasio said.

But, he said, any aggressive action toward a peaceful protester is wrong and “sets us back.”

Said Shea: “It is very difficult to practice de-escalation when you're having a brick thrown at you — at your head.”

He said: “This is such a passionate issue right now, not just in New York City but across the country. And I encourage, and I think it’s a great thing, that large crowds are assembling for this cause.”

Suffolk County Executive Steve Bellone condemned the violence across the country, particularly the burned-down Minneapolis police precinct, but said: “There is a lot of pain and anguish right now in the African American community, in the black community, here in our county and across the country.”

Although she didn't address the protests directly, Nassau County Executive Laura Curran on Saturday condemned Floyd's killing. “Incidents like these are abhorrent," Curran said. "The justice system must act with speed. It must be thorough, and it cannot delay prosecution.”

Due to the pandemic, Cuomo signed an order prohibiting large gatherings of any kind.

But both he and de Blasio said they understood why the protests were happening and urged social distancing and wearing face coverings to limit the virus' spread while protesting.

Sports figures call for action in response to death of George FloydOfficer Derek Chauvin, 44, was charged with third-degree murder and second-degree manslaughter.