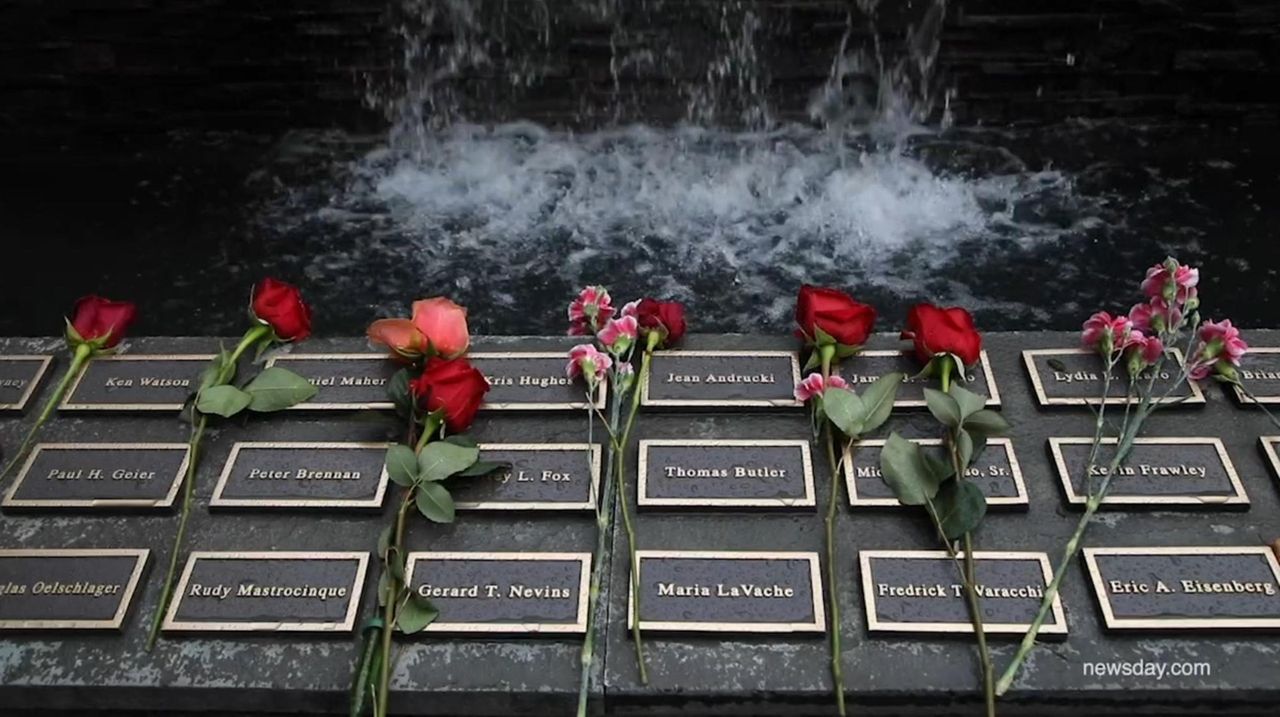 People gathered throughout the local area on Friday to pay their respects for the lives lost on Sept. 11, 2001.  Credit: Matthew Chayes, Craig Ruttle, Barry Sloan and Morgan Campbell

This story was reported by Robert Brodsky, Matthew Chayes and Olivia Winslow. It was written by Brodsky.

Amid the backdrop of nationwide pandemic, ceremonies remembering the victims of the Sept. 11, 2001, attacks were held in New York City, Washington, D.C., and Shanksville, Pennsylvania. Some were held remotely because of the threat of COVID-19, with others proceeding in person with heightened safety precautions.

After months of social unrest and with the presidential election on the horizon, the annual remembrances in lower Manhattan provided a rare opportunity for nationwide unity.

Vice President Mike Pence greeted Joe Biden, the Democratic presidential nominee and former vice president, with an elbow bump. President Donald Trump honored the “heroes of Flight 93” who brought down the plane headed to the nation's Capitol, while Biden shared a moment of grief with a woman in a wheelchair whose son was killed in the terror attacks.

Paul Schroth, 89, came from Carle Place to see his son-in-law, Brien Fletcher, read about 20 surnames beginning with the letter G, in addition to the name of his daughter-in-law’s father, Ray Meisenheimer, an FDNY firefighter killed in the attacks.

Schroth, who wore a black mask listing Meisenheimer and seven others from Rescue 3 in the Bronx who died on 9/11, said this was his first time back since the towers fell.

"Too many guys I knew, I worked with, lost their sons," said Schroth, a retired FDNY firefighter, adding that it's important to remember what happened, because "we let our guard down and bad things happen."

At Ground Zero, which has hosted the official ceremony since 2002, the reading of the 2001 victims' names and the six who died in the 1993 bombing of the World Trade Center was prerecorded — part of an effort to halt the spread of COVID-19.

Many family members who attended carried photos of the victims and placed red, white and yellow roses into the crevices where their loved ones' names are etched on the edges of the 9/11 memorial reflecting pools.

The event was not devoid of the pomp and circumstance of previous ceremonies. An honor guard marched out to the single beat of a drum while a color guard carried a ripped American flag. The ceremony began with a singing of "The Star-Spangled Banner."

At one point, Biden approached the woman in a wheelchair who said her son died at the age of 43. The mourner held a photo of her son, which she later handed to Biden, who lost his son Beau in May 2015.

“It never goes away,” Biden told the woman.

Only blocks away, the Stephen Siller Tunnel to Towers Foundation held a new event where the victims' names were read live by 126 readers. Masks and social distancing were mandatory while the lecterns where the names were read was frequently sanitized.

"Their names must be heard and read out loud," said Frank Siller, chairman and chief executive of the foundation, which is named for his firefighter brother who perished in the attacks. "We can never minimize that fateful day!"

Gina Pinos, 48, of Seaford, read the name of her then-fiance, the FDNY’s Jimmy Pappageorge, along with about 20 other victims' names. The couple were each 29 years old when he was killed. Pappageorge' son, Justin, now 25, wore his dad’s shirt to Friday's ceremony. With Justin were Pinos' sons, Liam, 14, and Stephen, 13.

"It's extremely important to read these names aloud every year," Pinos said. “As time goes on, new generations are coming up in age. This is how we’re going to keep that memory alive.”

Though crowds were small, many of those in attendance wore memorial T-shirts, banners, pins and other items to remember their loved ones. A half dozen people set up folding chairs in front of an LED screen in the closed roadway of Liberty Street to watch the ceremony.

Speaking to a gaggle of reporters, former Mayor Rudy Giuliani said the official event should have included live readers.

Pence, who also attended the foundation's ceremony, read Psalm 23 while a smattering chanted “four more years” — one of the few nods to presidential politics

"In the memory of all those we lost on this day 19 years ago, in memory of the heroes that were forged that day, and heroes forged on battlefields ever since and for the families, loved ones and friends they left behind, I pray these ancient words will comfort your hearts,” Pence said.

The vice president later made a stop at the FDNY Engine 10 Ladder 10 firehouse adjacent to Ground Zero. The FDNY Ten House, as it's known, was the first to respond to the attack and lost five members on Sept. 11.

"I know for many of you they weren’t just other members of the department, they were family, they were friends,” Pence told the firefighters.

Rep. Peter King (R-Seaford), who has attended the annual remembrances each year since 2002, wore an American flag mask and reflected on the day's historical significance.

"9/11 was the defining moment, really, of the last century," said King, who is retiring at year's end. "We have to come back here so we never forget; always remember and pay homage."

This report includes information from pool reports and The Associated Press.

Families remember the fallen, 19 years after 9/11Relatives of Nassau residents killed in 9/11 attend a memorial service at Eisenhower Park to honor those from the county who lost their lives. LI events to honor lives lost on 9/11While some were canceled or will be held remotely due to the coronavirus pandemic, many annual remembrances will continue this year to mark the 19th anniversary.