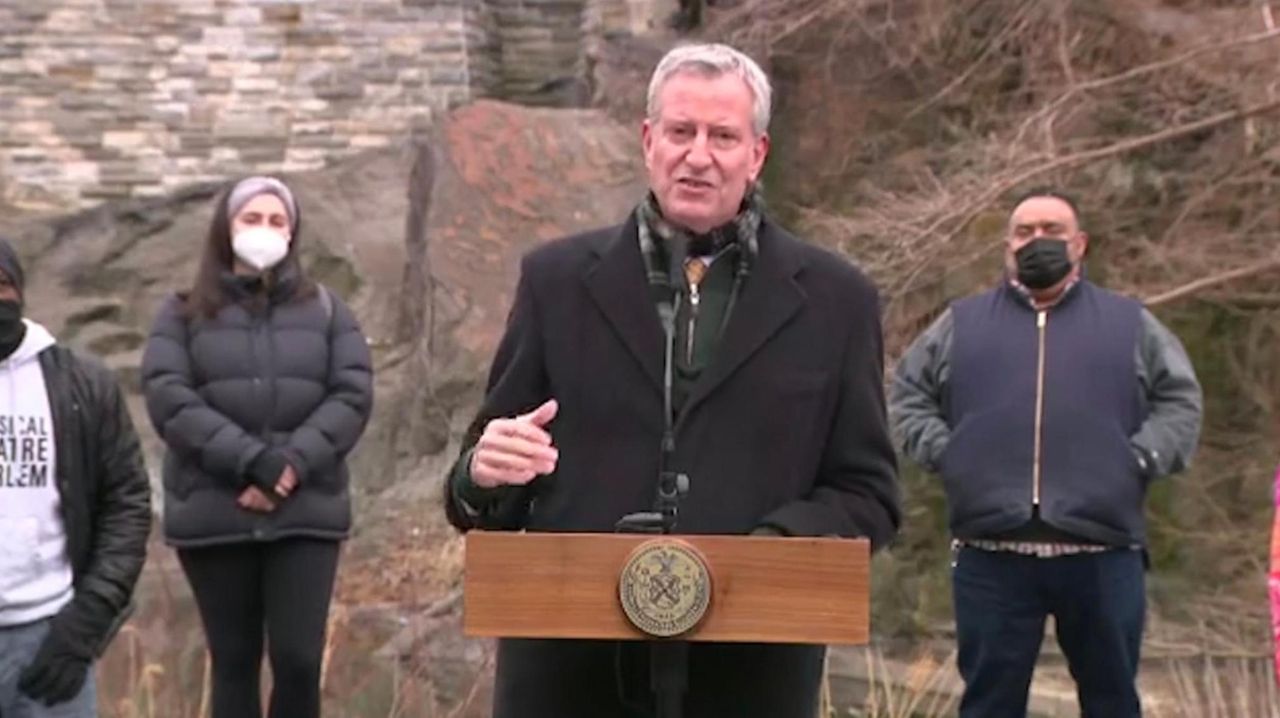 On Tuesday, Mayor Bill de Blasio announced that Shakespeare in the Park is returning this summer, a year after being suspended because of the coronavirus pandemic. Credit: NY Mayor's Office

Shakespeare in the Park is returning this summer, a year after being suspended because of the coronavirus pandemic, according to The Public Theater's website.

Promising a "safe return" with infection-control protocols, the theater said the season would run July 5 to Aug. 29 in its Central Park venue with an all-Black cast performing an adaptation of William Shakespeare’s comedy "Merry Wives of Windsor."

"We’ve grieved, Zoomed, innovated, supported our communities, and connected our city," said a message on the theater's website. "We’ve gathered brilliant artists to imagine summer under the stars in Central Park and are planning a return of Free Shakespeare in the Park."

Shakespeare in the Park, which dates back to 1962, provides free tickets to the public during the summer for outdoor performances. The 2020 season was canceled as the world fought the coronavirus pandemic and public gatherings everywhere were shut down.

"I am happy to say the Bard is back in Central Park, and 2021 is going to be wonderful, and people will be able to come back and enjoy," Mayor Bill de Blasio said, before quoting Henry VI, Part 3: "For here, I hope, begins our lasting joy."

"Merry Wives of Windsor," from 1602, and set in the early 15th century, follows the foibles of Sir John Falstaff as he tries to woo two married women. His pursuits don’t go as hoped.

This summer's version is to be set in South Harlem, "in the African diasporic community in the contemporary New York," said Oskar Eustis, artistic director of the Public Theater, which runs Shakespeare in the Park.

He said that Shakespeare in the Park would follow whatever public-health guidelines are in effect when the production begins — such as masking, distancing, testing and temperature taking. The venue at Central Park holds 2,000 but as of the current restrictions in New York State, that would mean 500 seats.

Eustis said 80% of tickets would be distributed through a public lottery with the balance to Public Theater donors.

Atlantic Beach thrives on a sense of community
0:22
Cops: High school teacher had sex with student
0:47
Calls for Schumer to do more to help citizenship efforts
Smithtown to tally up its trees
1:44
Officials on LI and NYC preparing for possible protests following Chauvin verdict
Bethpage Air Show ticket sales resume after website breaks
Didn’t find what you were looking for?