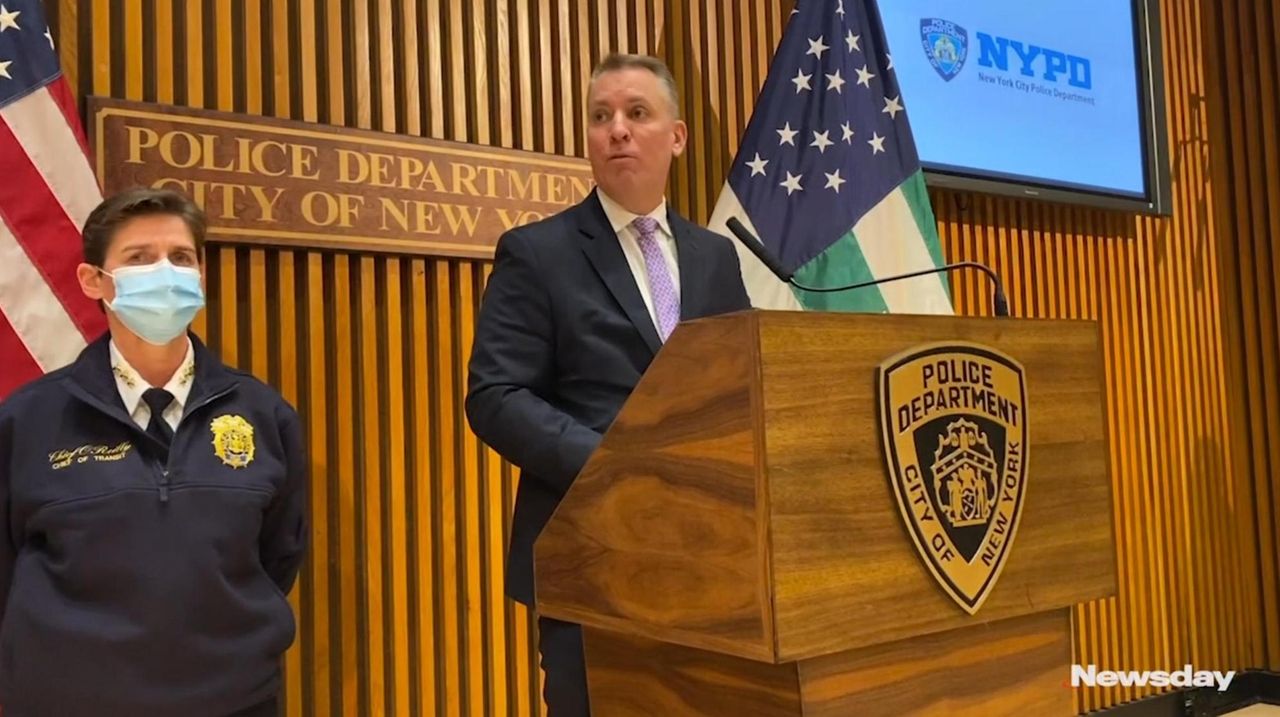 The NYPD has increased its police presence on the subways after four homeless people were stabbed or slashed, two fatally, in less than 24 hours along the A line, Police Commissioner Dermot Shea said Saturday. Credit: Newsday / Matthew Chayes

Four homeless people were found stabbed or slashed — two fatally — in less than 24 hours at opposite ends of the New York City subway system’s A line, the NYPD said Saturday afternoon.

Later in the day, a man was detained in connection with the case, a law enforcement source told Newsday late Saturday night on condition of anonymity. Further details were not immediately available.

Earlier, New York City Police Commissioner Dermot Shea said of the crimes, "The common denominators that we see in these four incidents are, the proximity of the crimes, as well as all four occurring on the A line."

Violent crime has spiked in the subway system during the coronavirus pandemic, even as ridership has plummeted to less than a third of pre-pandemic levels.

To bolster security, Shea said Saturday afternoon, the NYPD was deploying 500 additional cops focused on the subways. He promised to "immediately commence a surge of officers to patrol both above and below ground."

Kathy O’Reilly, the NYPD’s chief of transit, said three of the attacks, and perhaps the fourth, are probably linked.

O'Reilly said the first attack occurred Friday morning at the 181st Street subway station in upper Manhattan, when a 67-year-old was stabbed by a male assailant. The victim survived.

The next attack was at 11:29 p.m., when a man was pronounced dead aboard an A train at the Far Rockaway-Mott Avenue station in Queens, with stab wounds to neck and torso.

Two hours later, an unconscious 44-year-old woman was found inside a train in Inwood at the 207th Street station with multiple stab wounds and later pronounced dead.

Brian McGee, who is in charge of NYPD detectives in northern Manhattan, said, "Just looking at some of their history, yes, we believe that the two deceased and the two non-lifethreatening are homeless."

The victims were found aboard trains and elsewhere in the station, such as the platform, according to McGee. He said that in at least two of the attacks, the assailant is a man, and in at least one of them, the victim was asleep. But, McGee said, "Everything was unprovoked."

Shea said the extra cops were being diverted from other assignments as well as brought in on overtime.

1:16
Newsday analysis: About 80% of LI students learning 'on-site'
Afraid for their elders. Tired of stereotypes. Young Asian Americans speak up.
2:28
Teen accidentally locks self in former bank vault
Lawmakers back 3% hike in Suffolk funding for SCCC
NYPD: 4th arrest made in anti-Semitic attack on LI man
Advocate: Wheatley graduate harassed over commencement speech
Didn’t find what you were looking for?