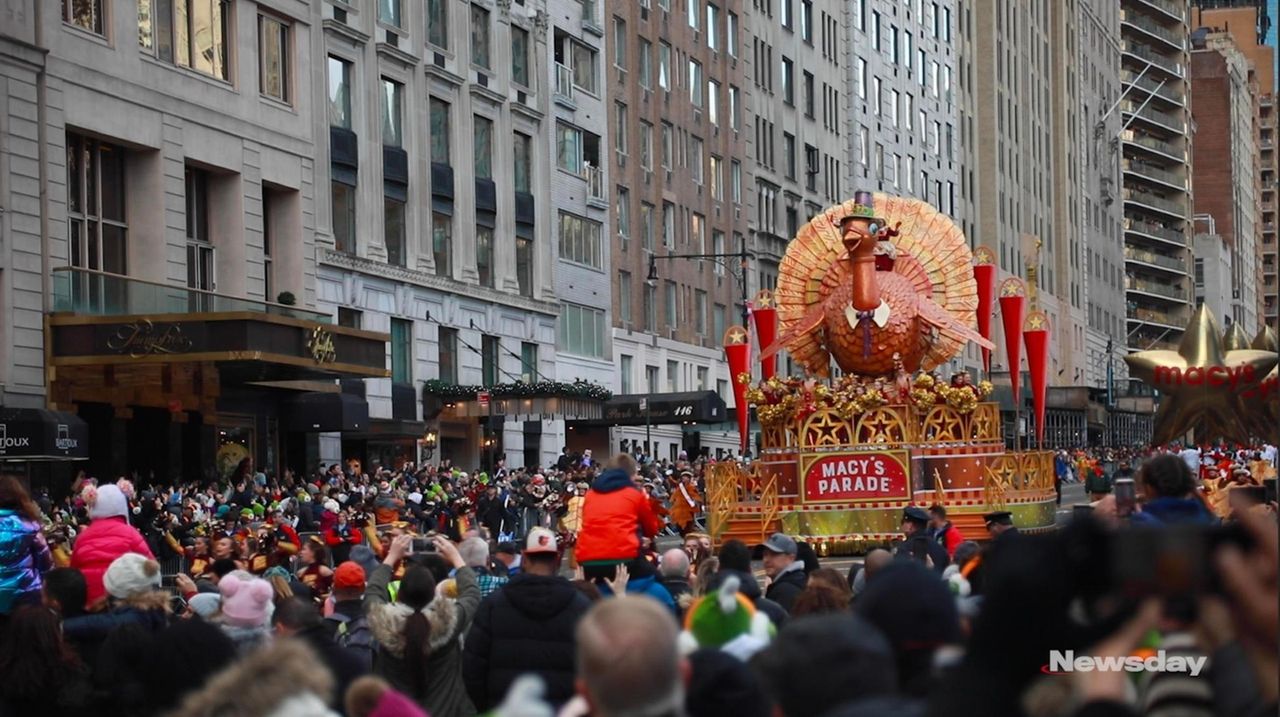 This story was reported by Craig Schneider, Antonio Planas and Matthew Chayes. It was written by Michael O'Keeffe.

Astronaut Snoopy, SpongeBob SquarePants and the Elf on the Shelf soared over Manhattan on Thursday — despite blustery conditions that threatened to ground the larger-than-life character balloons — as millions of spectators lined New York City streets for the 93rd Macy’s Thanksgiving Day Parade.

A forecast of high winds had threatened to keep the balloons on the ground, city officials said this week, for only the second time since the world-famous parade began nearly 100 years ago. But the NYPD soothed fears of a balloon-less parade just before 8 a.m. Thursday, when it announced on Twitter that Snoopy and his pals would indeed take to the skies over the 2.5-mile parade route that begins on the Upper West Side and ends in Herald Square.

Waves of cheers greeted the 16 giant balloons — which also included Smokey Bear, the Grinch, Greg from “Diary of a Wimpy Kid” and Chase from “Paw Patrol” — as parents popped small children on their shoulders to get a better look. The gigantic helium-filled figures flew lower than most years over spectator-clogged streets because of the breezy conditions.

“It’s a New York tradition, it’s an American tradition,” said Raymond Ferguson Jr. of Dix Hills, who watched the parade across the street from Radio City Music Hall with his wife, Charlotte, and their kids Raymond III, 13, Alexa, 9, and Andrew, 5. “I don’t remember the last time we watched the parade on TV because we’re always here.”

Elizabeth King of Oyster Bay let out a big cheer as the most-anticipated celebrity of all — Santa Claus — cruised by on his sled, waving to the crowds on Central Park West.

King said her favorite part of the parade was the marching bands because she enjoyed their joyous sound. “I just love the bands,” King said.

City regulations bar the balloons from the parade if there are sustained winds above 23 mph, or if gusts exceed 34 mph. In 1997, high winds pushed a Cat in the Hat balloon into a streetlight. Part of the light broke off and fell on spectators, injuring four people. In 2005, an M&Ms balloon crashed into a Times Square light pole, injuring two.

The NYPD said there were no similar incidents Thursday, but the scores of trained handlers who navigated the helium-filled giants through city streets had their work cut out for them. A stiff wind caught the Grinch balloon near West 71st Street, blowing it close to the crowd lined along Central Park. Spectators let out a big “woooo” as the balloon’s 60-plus handlers held on to their lines like rodeo cowboys hanging on to a lassoed wild horse.

The NYPD also said there were no arrests related to the parade.

At 77th and Central Park West, Caroline Wheeler of Manhattan said she had positioned herself at the front of the metal barricade at 5:45 a.m. She attended the parade with her friend Bryndee Carlson, also of Manhattan. They were perched in blue folding chairs and had brought a few boxes of doughnuts to share with friends and family.

“This is my fifth year at this spot,” Wheeler said. “It’s a tradition.”

With clown makeup on her face, Dora Kaufman, 18, was searching for her float. She wore a white football jersey and a plastic barrel around her midsection. She’s been in the parade for eight years.

“I’m good,” said Kaufman, of Manhattan. “You get to cheer people up and watch all the people cheering along the way.”

June Smith of New Baltimore, Maryland, said she had watched the parade on television for years and decided this was the year to get off the couch.

“It’s very exciting after all these years of watching it on TV to actually be here in person — it’s one of those ‘off your bucket list’ that you always wanted to do,” Smith said.

Celine Mazzeo, who came all the way from Independence, Ohio, said her family had watched the parade in past years on television, but she wanted her daughter Alysia Gangale, 10, to experience it in person.

“Being in the living room is nothing like being here,” Mazzeo said.

Across the street from Radio City Music Hall, Raymond Ferguson III, the Dix Hills teen, stood on a four-foot ladder to get a better view of the floats, balloons and celebrities moving along Sixth Avenue.

He said he was impressed with how the annual parade embodied the spirit of Thanksgiving.

“I just like how people come together,” he said.