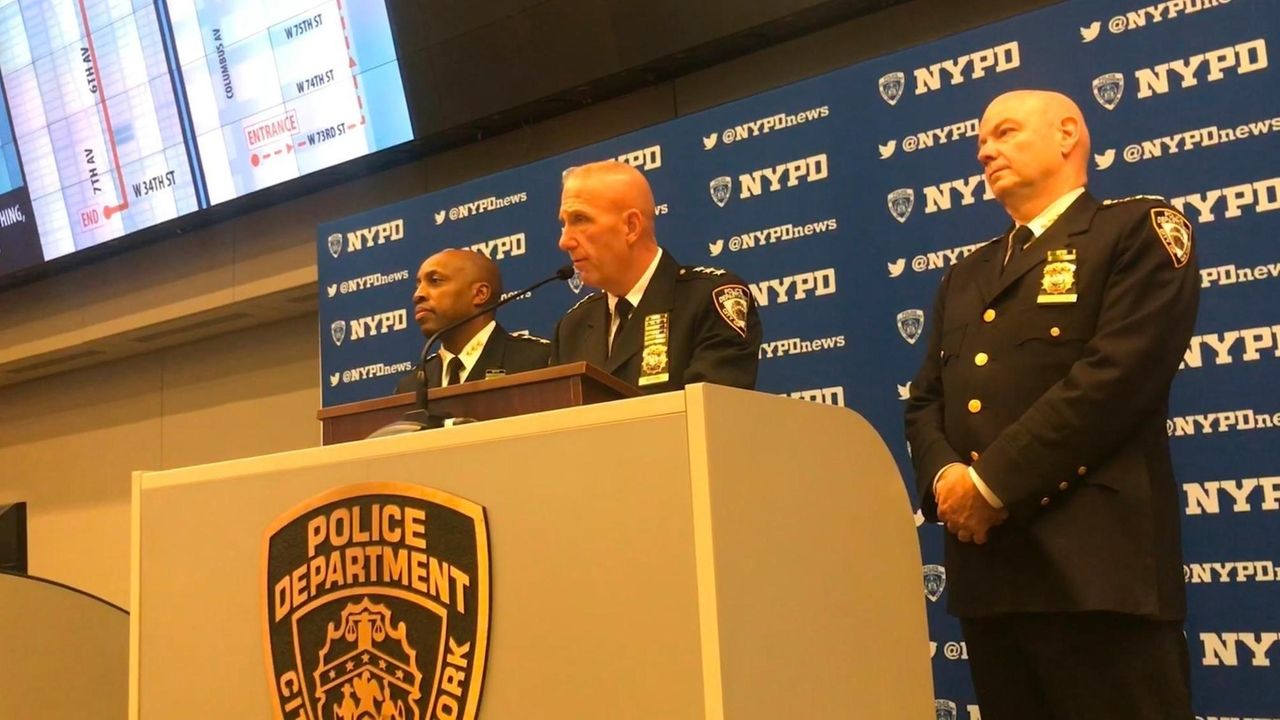 James Waters, NYPD chief of counterterrorism, talks at One Police Plaza about the bomb-sniffing dogs and drone-detecting technology the department will deploy for the Macy's Thanksgiving Day Parade.  Credit: Newsday / Matthew Chayes

The NYPD will be equipped with those defenses — and will deploy thousands of police officers — to guard Thursday’s annual Macy’s Thanksgiving Day Parade.

The parade, which dates to 1924, steps off at 9 a.m. at Central Park West and 77th Street. It proceeds to Columbus Circle, turns onto Central Park South, then down Sixth Avenue to West 34th Street. Then it heads west and ends at West 34th Street and Seventh Avenue, the location of Macy’s flagship store, at Herald Square. It's scheduled to end around noon.

“The entire perimeter will be secured with our blocker cars, about 90 of them, and sand trucks, about 76,” the NYPD’s chief of counterterrorism, James Waters, said at a news conference Wednesday in Manhattan at police headquarters.

There is no specific, credible threat to public safety, Waters said.

The blocker cars and sand-filled trucks are intended to prevent the type of attack that happened July 14, 2016, in Nice, France; nearly 90 people were killed when a man intentionally drove a truck into a festive crowd.

In the post-9/11 era, the detectors, dogs, trucks, drone-disabling tools and thousands of officers are standard NYPD protocol for big, public events such as New Year’s, the July Fourth fireworks, the marathon and the Thanksgiving parade.

Waters said the department had access to technology to disable a drone flying without permission over the parade. In the past, the NYPD has said an unauthorized drone pilot could be subject to ticketing or arrest for disorderly conduct.

Macy's website says the parade draws 3.5 million spectators and 50 million viewers watching at home. There will be dozens of balloons, floats, performers, marching bands and other entertainment.

NYPD Chief of Patrol Rodney Harrison said balloons could be ordered to be flown lower, or even be grounded, depending on how windy the parade route gets. The NYPD is deploying wind-detecting devices along the route, he said, to be monitored by police supervisors trained at reading the devices.

The department also deployed hundreds of officers Wednesday afternoon into the evening to a balloon-inflation event near the parade route on Manhattan's West Side.

Large backpacks, coolers, alcoholic beverages, chairs and umbrellas are banned, according to the NYPD, which urged spectators to take mass transit because of expected gridlock caused by street closures.

Group launches hotline to help struggling East End families
DA: Man held without bail in crash that killed mom, 10-year-old daughter
1:33
Issuance of minor summons turns into dangerous struggle
Forecast: Thunderstorms tonight with gusts up to 20 mph
Bridge in Lawrence to be renamed for civic leader
Report: Thousands of MTA employees don't use time clocks designed to prevent fraud
Didn’t find what you were looking for?