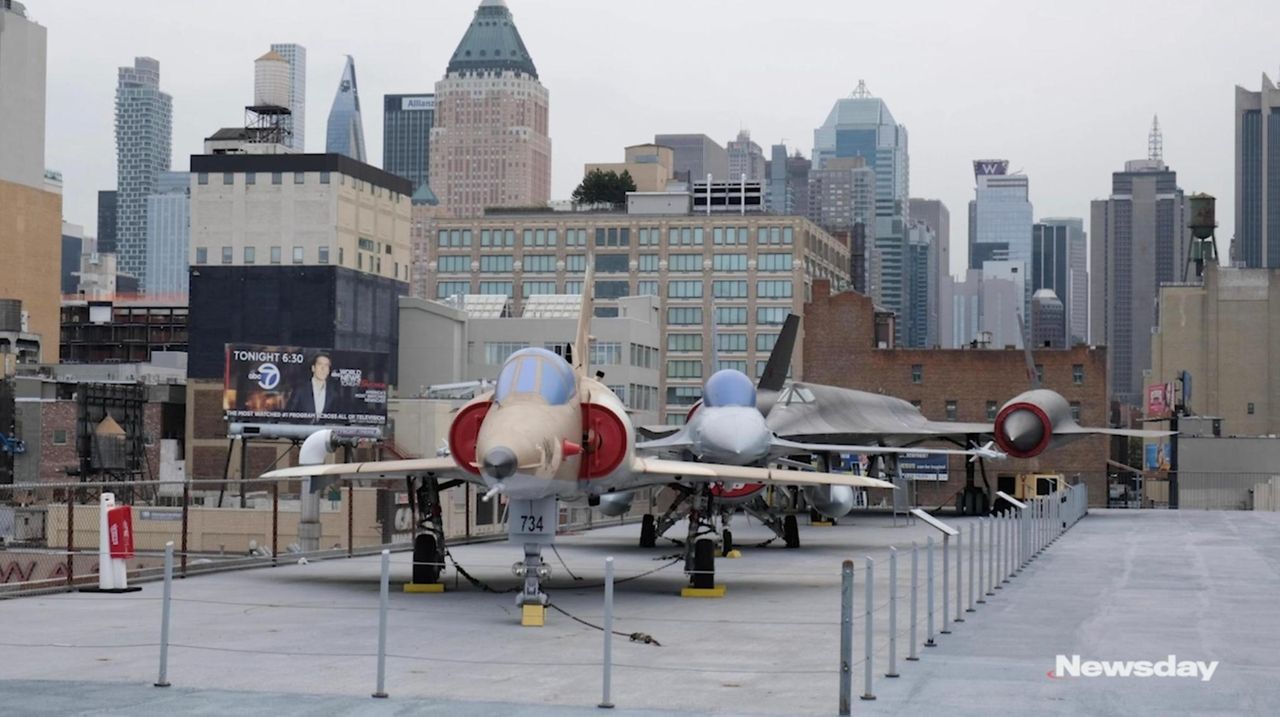 The Intrepid Sea, Air & Space Museum will reopen on Sept 25. On Thursday, Newsday got a sneak peek at the safety precautions set up for the reopening. Credit: Craig Ruttle

Seventy-five years after the end of World War II, more than 77 years after it was first commissioned, the USS Intrepid will reopen for business next week, making a comeback from one of the stranger conflicts weathered in its storied history — the battle against the global coronavirus COVID-19 pandemic.

The aircraft carrier, known as The Fighting "I," now the centerpiece of the Intrepid Sea, Air & Space Museum in its berth on West 46th Street and 12th Avenue at Hudson River Park, will reopen to the public on Sept. 25, museum President Susan Marenoff-Zausner said this week.

"We have worked to make this institution,,,as safe as possible," Marenoff-Zausner said in an interview Thursday during a media sneak-peek at the new protocols. "350,000 square feet is certainly not easy to clean. However, it is our number one priority as part of our safety measures," she said, adding that the reopening has been six months in the making.

Marenoff-Zausner pointed out that one of the main exhibits, the "amazing, incredible" flight deck and historic aircraft, is outdoors. There is a new informational app that does not require re-use of headsets.

Visitors will be able to access a majority of the vast museum, including the flight and hangar decks, most exhibits and air craft, as well as the Space Shuttle Pavillion.

Due to COVID concerns officials have announced some areas of the museum will remain closed until further notice. Those include the interior of the supersonic transport Concorde, the Lutnick Theater, simulators, food service, the retail store and the submarine Growler, which is berthed nearby in the museum complex.

But, officials said, the museum plans to operate on a five-day-per-week schedule, Wednesday through Sunday, open from 10 a.m.-5 p.m. — with what's been described as "a timed, advance reservation ticketing policy" in place.

As part of the new pandemic-protocol guidelines, officials said protective barriers have been added to the box office, information desk, and other "strategic locations" around the museum. Strict six-foot social distancing measures will be enforced, officials said. There will be hourly, and in some cases semi-hourly cleaning and disinfecting for all exhibits and elevators.

Officials said more than 200 hand sanitizing stations also will be in place throughout the museum.

All employees in the museum complex are required to wear protective equipment in connection with the new reopening guidelines.

Officials said all employees are subject to daily health self-monitoring before their work shifts, in accordance with guidelines established by the Centers for Disease Control and Prevention, as well as by the state of New York.

The Intrepid is an Essex-class aircraft carrier, one of 24 built during World War II, and was launched April 26, 1943 — and commissioned that Aug. 16.

Assigned to the Pacific Theater, Intrepid saw action in many important battles — including the Battle of Leyte Gulf. It served throughout the central Pacific, as well as in the Philippine Sea, and campaigns in the Gilbert and Marshall Islands, Kwajalein and Truk Lagoon. Torpedoed once and struck four separate times by Japanese kamikaze planes, including a horrific strike by a Japanese G4M "Betty" bomber, Intrepid was damaged so many times — and spent so much time undergoing dry-dock repairs — sailors sometimes demeaned it with nicknames like "Decrepit" and "The Dry 'I'."

Nevertheless, the Intrepid survived combat and later even participated in the war in Vietnam before being decommissed March 15, 1974.

Key historic contributions included being the recovery ship for both a Mercury and Gemini space mission in the 1960s.

Intrepid first opened as a museum in August 1982 and was designated a national historic landmark in 1986, later undergoing major renovation at Pier 86.

The ship also served as the FBI operations center following the 9/11 terror attacks.

For a full list of new guideline protocols, as well as FAQs and advance timed ticketing information is available at InterpidMuseum.org.