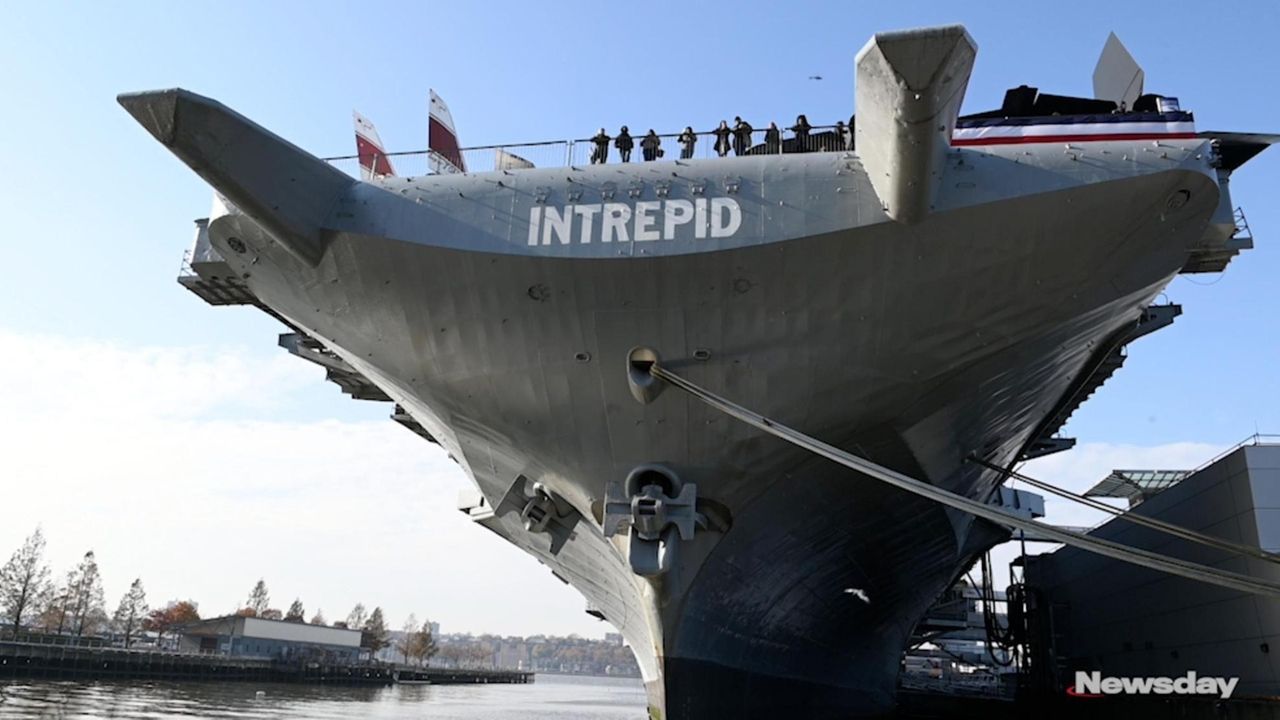 Seventy-five years ago, 93-year-old Ed Coyne of Plainview, a newly minted high school graduate, was on the USS Intrepid’s flight deck when a Japanese kamikaze plane torpedoed into the famous naval carrier on the Pacific in 1944.

Coyne had just finished fueling the carrier’s fighter planes that morning that “were out chasing down the Japanese,’’ he said, when the aerial suicide mission plane exploded into a ball of fire and smoke before his eyes.

Nearly 3,000 crew members sprang into action putting out flames to save the ship from sinking and rescue crew members trapped in their smoke-filled compartments. It took two-and-a-half hours to put out the flames.

“You’re not scared,’’ said Coyne. “When you are in combat you are too busy doing your duties.’’

Coyne led the 75-year-anniversary memorial service at the Intrepid Sea, Air & Space Museum on Manhattan’s West Side on Monday.

“We were trained men led by leaders who were all officers from Annapolis [U.S. Naval Academy],’’ said Coyne with pride, standing at the very spot from where 69 crew members were buried at sea the next day.

More than a hundred museum visitors and friends attended the memorial service and participated in a moment of silence at the same hour of the kamikaze attack.

A short museum film showed the history of the attacks narrated by actors who retold the stories of those who served on the Intrepid. There were two kamikaze attacks in a span of three months. “The Japs called us the ‘ghost ship’ that could not sink,’’ said one narrator.

The Intrepid crew “did not lose the will to fight,’’ said Susan Marenoff-Zausner, museum president, who led the moment of silence.

After the ceremony, Coyne said remembering the attacks through the short film “was emotional. It brings back the people that died. We were all young men who signed up after Pearl Harbor which was on a Sunday. On that Monday, we were knocking down the doors at the recruitment office to get in. I was 17.’’

“I wanted to fight the Japanese,’’ said Coyne. “That was the attitude. Love your country.’’ After the war, Coyne, the son of a mail carrier, went to work for U.S. Customs and its narcotics agency in New York City and Europe.  The agency is a predecessor of the federal Drug Enforcement Administration.

Coyne and a dozen of his fellow Plainview veterans from the Veterans of Foreign Wars and the American Legion laid a wreath at the ship’s memorial that lists the names of the men who died in the attacks.

“It brings us together,’’ said John McGovern, 84, of Plainview, who was in the Air Force during the Korean War. “We meet and share memories even though the wars were different.’’ Serving, he said, “made me a man. It trained me and taught me about life.’’