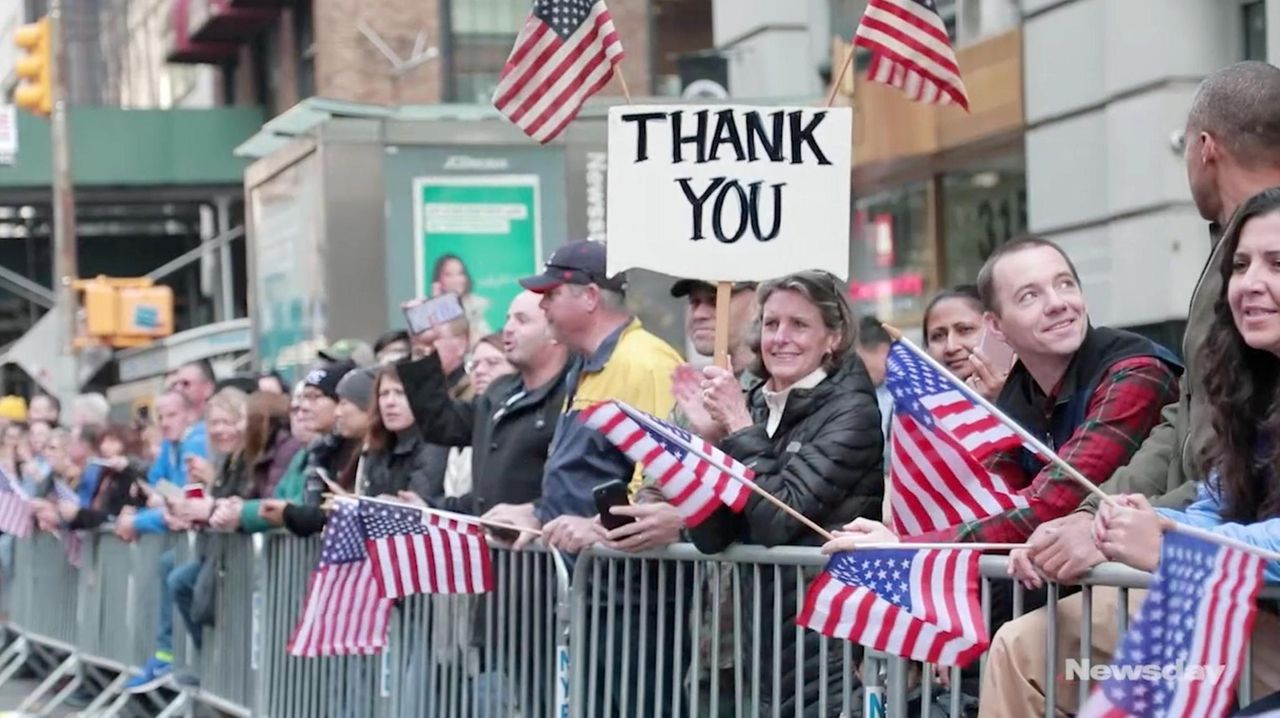 Supporters of President Donald Trump clashed verbally with protesters in Manhattan on Monday as thousands of others lined Fifth Avenue to honor veterans and active members of the military at the New York City Veterans Day Parade.

Trump, the first sitting President in history to attend the annual parade, kicked off the day with a speech at Madison Square Park while protesters chanted “lock him up,” two days before the House of Representatives is scheduled to begin public impeachment hearings. The words “impeach” and “convict” were spelled out across a building overlooking the park where Trump spoke.

Air Force veteran Victor Bohm, associate director of Iraq and Afghanistan Veterans of America, said some in the crowd forgot what Veterans Day is all about.

“Today is not about the president,” said Bohm, whose organization advocates for vets and helps them make the transition to civilian life. “It is about veterans and we want to keep it that way, about veterans.”

The NYPD said there were no reports of arrests or physical confrontations linked to the parade, but the war of words between Trump supporters and protesters frequently turned ugly.

“You should go to China,” a senior citizen who supported Trump told an elderly woman who held a handwritten sign that said “Trump Pence Out Now” at the corner of 24th Street and Broadway. “You should be ashamed of yourself. You should die.”

The mood was less confrontational uptown as a motorcycle motorcade, marching bands and floats representing veterans organizations made their way along Fifth Avenue to 46th Street. Some 30,000 people, including Mayor Bill de Blasio and Gov. Andrew M. Cuomo, marched along the 1.2-mile route.

The mayor, a Trump critic and one-time White House aspirant, said it was “very appropriate” for the president to attend the parade despite Trump’s deep unpopularity in New York.

“This is not a day for partisanship, it’s a day to honor veterans,” de Blasio said.

One group dressed as Army doughboys, a fitting tribute to the 100th anniversary of a parade begun in 1919 to mark the first anniversary of the end of World War I. A man in civilian clothes from that period pushed a baby in a carriage that had been decorated to look like a tank.

His friend John Attanasio of Bayside said the engines of the 75-year-old command cars — used by ranking officers during the heat of battle in Europe — were rebuilt by club member Tony Dulligan. “He’s a top mechanic,” Attanasio said. “Get his name in the paper.”

Meanwhile at 23rd Street and Sixth Avenue, spectator Curtis Bryant of Brooklyn, who served in the Marines from 1976 to 1982, yelled “Semper fi” and gave fist bumps to other veterans of the corps.

“I’m here to support other Marines,” Bryant said. “I love my country and I would do it all over again if I could. When my country needed me, I was there for it.”