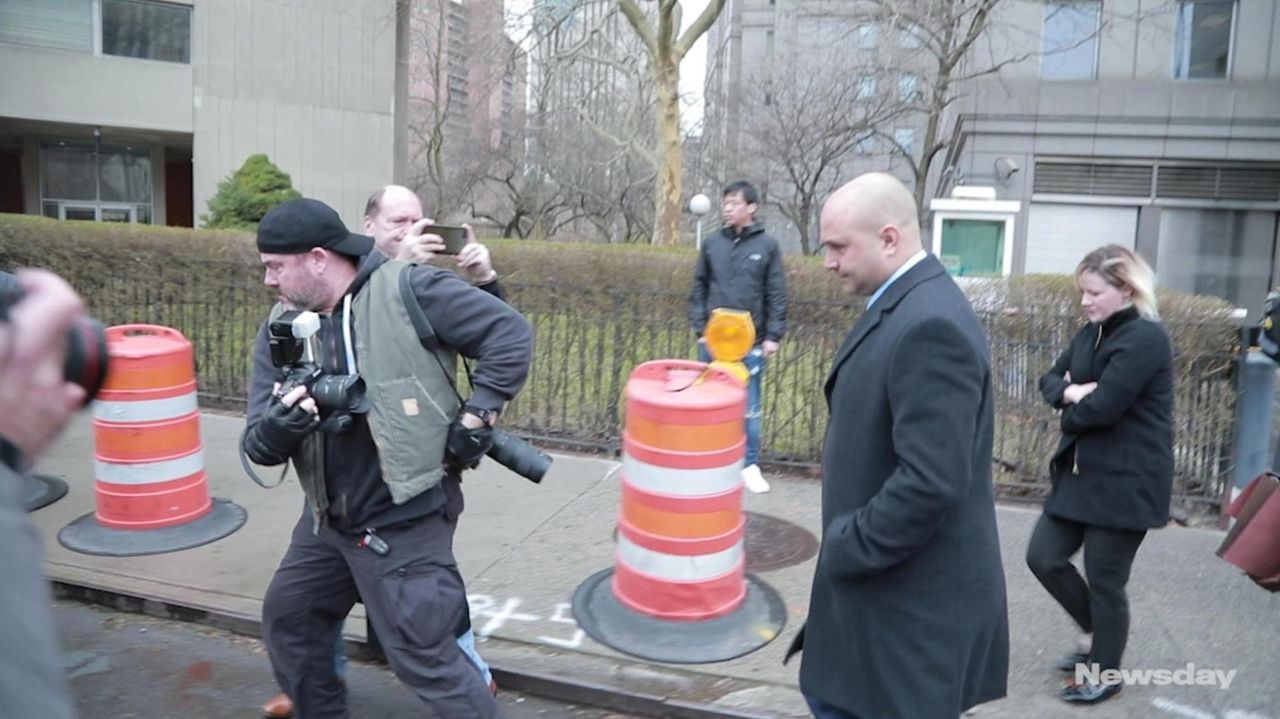 Ex-radio host Craig Carton was sentenced Friday to 42 months in prison by a Manhattan federal judge for running a ticket-resale Ponzi scheme after a plea for leniency that portrayed him as a victim of childhood rape and gambling addiction. Credit: Newsday / Yeong-Ung Yang

One-time sports-talk radio star Craig Carton couldn’t talk his way out of prison time Friday as a Manhattan federal judge sentenced him to 42 months for running a ticket-resale Ponzi scheme, despite his plea for leniency as a victim of the “demons” of childhood rape and gambling addiction.

“Gambling may be why you did what you did, but a gambling addiction is not an excuse for stealing from people,” said U.S. District Judge Colleen McMahon, comparing him both to fraudster Bernie Madoff and to defendants who blame their crimes on drug addiction.

McMahon’s sentence followed an emotional pitch from Carton, who told the judge episodes of sexual assault as a child were re-triggered by on-air talk about Jerry Sandusky’s abuse of children at Penn State, and he turned to blackjack for “salvation” but needed to steal to cover losses.

“It simply made the demons go away,” he told the judge. “I did it more and more so I could simply escape and feel better … Gambling became my escape, my anesthesia, my coping mechanism.”

Carton gave few details of the assaults — his lawyer said they occurred at camp and his family “silenced him” — but said he had received treatment for his gambling, citing supporters from Gamblers Anonymous in the audience, and had become a “better person” since he was charged.

He urged the judge to leave him free to resume his old job and proselytize an anti-gambling message instead of putting him in prison, a message outlined in a video called “The Reckoning” that McMahon said she had seen publicized.

“I have a unique skill …” Carton told her, “a skill that would be wasted behind bars.”

McMahon, herself a sports fan who listened to Carton’s show — “Good afternoon, Mr. Carton. Colleen from New York, first time, long time,” she introduced herself — said that until the day of his arrest she thought of him as a “knowledgeable” sports talker who at times behaved like “a jerk.”

She said childhood sex assaults — detailed in an unpublished chapter from his autobiography “Loudmouth” that defense lawyers filed under seal — didn’t absolve him of a Ponzi fraud any more than the gambling habits.

“Everyone has a motive,” McMahon said. “Every one has a reason. … No psychiatrist has opined that it drove you to commit fraud. … It explains a lot, but it doesn’t excuse anything.”

She said that she limited his prison time in part because of his promise to talk about the dangers of gambling and ordered 150 hours of community service upon release, but said she was skeptical WFAN would give him a platform amid growing reliance on ads for legalized sports gambling.

“I think there’s some magical thinking there,” she said.

Carton, a father of four who once made a $2 million annual salary at WFAN, loudly denied the charges when they were first filed in 2017. Testimony at his trial last year indicated he exploited his WFAN celebrity to try to make ticket deals with executives at Barclays Center, and then lied to the hedge fund Brigade Capital about his success as part of his scam.

Witnesses described how he borrowed money to finance regular junkets to casinos in the Bahamas, New Jersey and Pennsylvania, and diverted money from ticket investors to repay debts and fund more gambling. He bragged about his gaming acumen on WFAN, and said Friday he once won $4 million in three days and once lost $700,000 in less than a day.

By the time he filed a sentencing letter with McMahon last month, his initial defiance had given way to remorse over how he damaged his family and ruined his career — a “descent into hell,” the judge called it.

Carton faced a potential maximum prison term of 45 years for wire fraud and securities fraud. Prosecutors asked for at least 70 months, the low end of advisory federal sentencing guidelines calling for a term of 70 and 87 months.

McMahon, however, said those ranges were inflated, and he deserved a lower sentence to credit his good works, including his funding of the Tic Toc Stop foundation to aid fellow sufferers of Tourette Syndrome.

In addition to the 42 months in prison and community service, the judge ordered Carton to make restitution of $4.8 million to victims of his fraud. He must surrender at a prison to be designated on July 15. He declined to comment leaving court and was hustled into a waiting van.