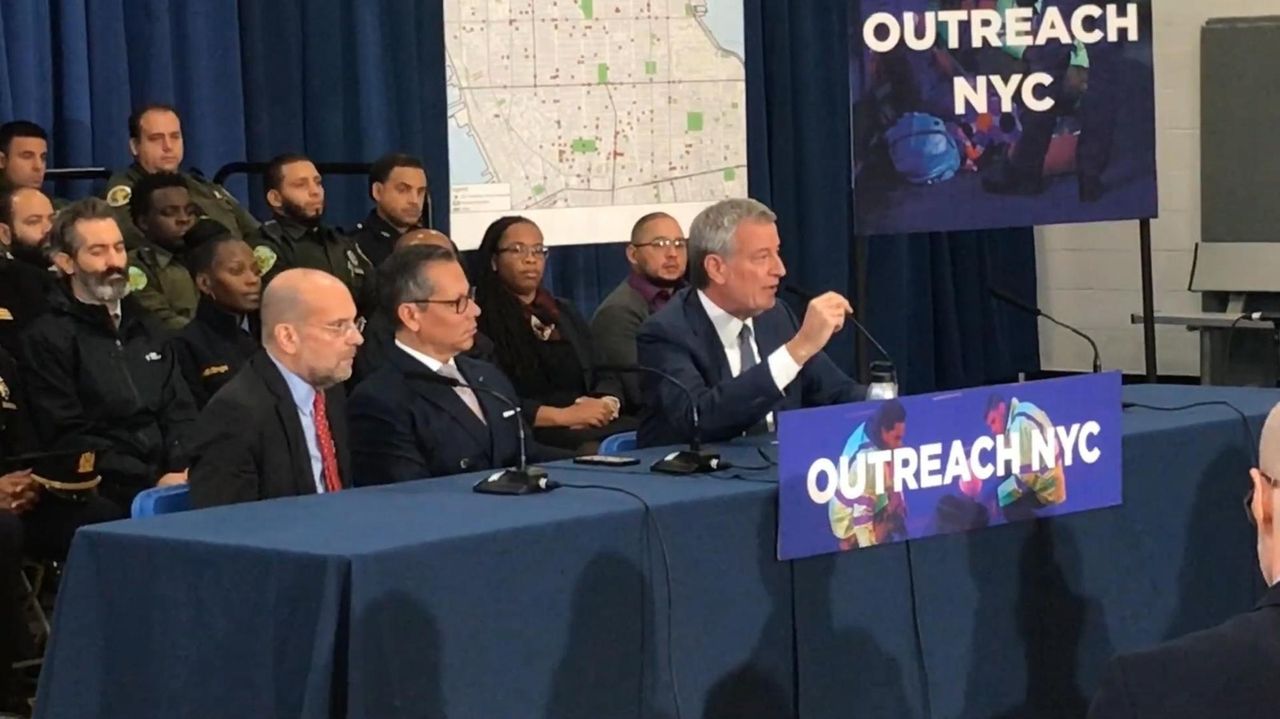 New York City Mayor Bill de Blasio has directed about 18,000 municipal workers to use the 311 app when they see homeless people, his latest attempt to reduce the rising number of city residents without shelter, he said Thursday. Credit: Newsday / Matthew Chayes

Mayor Bill de Blasio has directed about 18,000 New York City municipal workers to use the 311 app when they see homeless people, his latest attempt to reduce the rising number of city residents without shelter, he said Thursday.

The employees, drawn from the FDNY as well as the city's departments of sanitation, health, buildings and parks, are undergoing training, which is in addition to existing job duties, de Blasio said of the program: “Outreach NYC.”

“We want you to think about everywhere you go, " de Blasio said at a news conference in Manhattan’s East Village. "We want you to be constantly looking. … if you know there are certain areas that you should look at in particular because you’ve seen a problem before, we want you to focus on those areas. …It’s not like it’s rocket science.”

There were about 3,500 people living in city parks, subways or on the streets, according to the most recent estimate by the city's Department of Homeless Services. Most were in Manhattan.

The number of city homeless has steadily climbed since de Blasio took office despite increased outreach and adding more below-market-rate rentals. When he became mayor, in January 2014, the number living in shelters was 53,615. As of September, there were 62,391 people living in city shelters, according to the group the Coalition for the Homeless.

If city employees see homeless people while at work, they have been directed to use the city's 311 smartphone app, a first point of contact for residents in need of assistance.

Based on the 311 reports, city personnel specializing in homeless outreach will try to persuade those identified as homeless to seek shelter, de Blasio said.

The 18,000 workers making the reports will receive no additional pay, he said.

“Obviously these calls take only a few minutes,” he said.

De Blasio made the announcement at a news conference where he introduced Dr. Raul Perea-Henze as a deputy mayor for health and human services. Perea-Henze worked in the Obama administration addressing chronic-veteran homelessness in the United States.

Perea-Henze grew up in Mexico, where he attended medical school, and later completed training in public health at Yale, according to de Blasio’s office.

DA: Man held without bail in crash that killed mom, 10-year-old daughter
1:33
Issuance of minor summons turns into dangerous struggle
Forecast: Thunderstorms tonight with gusts up to 20 mph
Bridge in Lawrence to be renamed for civic leader
Report: Thousands of MTA employees don't use time clocks designed to prevent fraud
Ever wanted to own a fire truck? You can bid on this 20-year-old pumper.
Didn’t find what you were looking for?