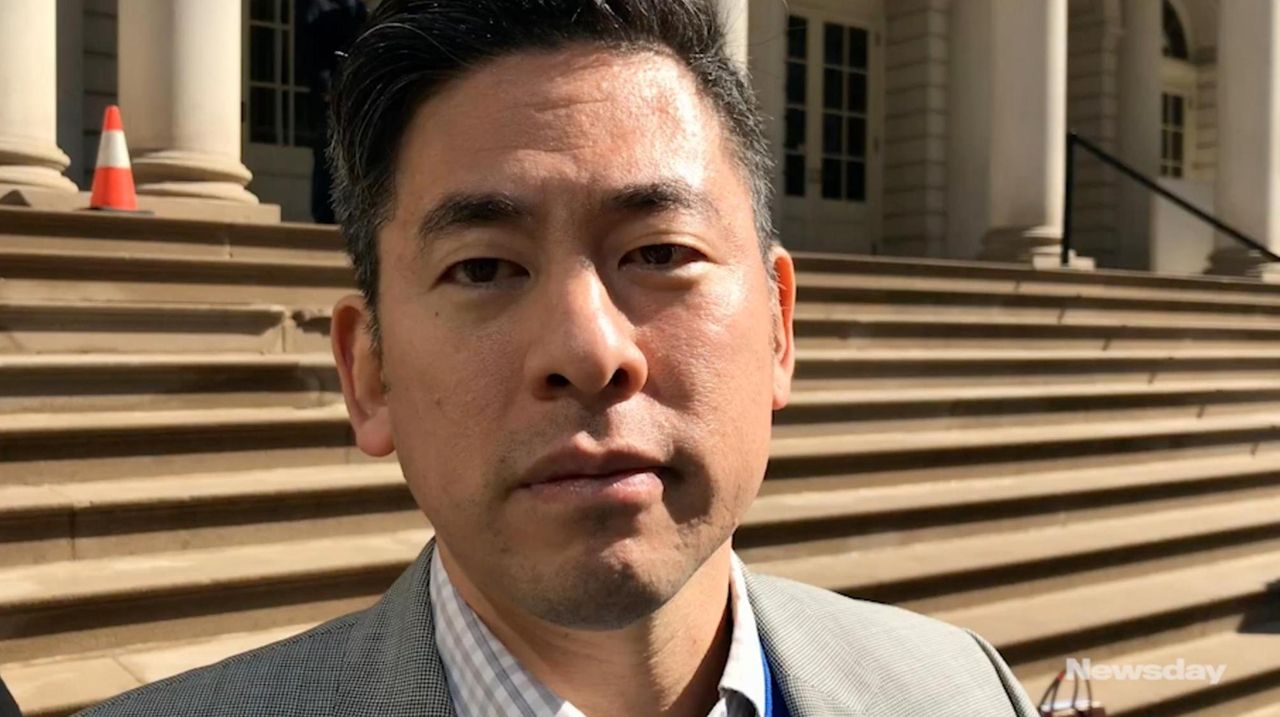 Steve Choi, executive director of the New York Immigration Coalition, spoke Tuesday at New York City Hall about the need for more state funding for census activities on Long Island to make sure there is no undercounting. Credit: Newsday / Matthew Chayes

Several members of Congress on Tuesday urged Albany to budget $40 million to hire workers to encourage New Yorkers to complete the upcoming census.

The census, to be conducted next in 2020, is used to determine how much the federal government gives individual states for the following decade.

The members of Congress, speaking at City Hall, said they’re worried that the state could be undercounted — and thus underfunded — because New Yorkers don’t know to complete the forms, live in unconventional dwellings, or are not in the country legally and are afraid to fill out a census form.

Meeks said the money would help “show the individual who’s living in public housing at 1600 Pennsylvania Avenue that we are going to make sure that everybody is counted in the state of New York and we’re not going to allow you to win.”

Gov. Andrew M. Cuomo’s spokesman Jason Conwall said the state is commissioning “a massive overhaul of existing data to ensure a complete count,” along with other steps like challenging the inclusion of a citizenship question. A federal court in Manhattan has struck the question from the census; the matter is to go before the U.S. Supreme Court.

“We will launch a comprehensive campaign to ensure that every New Yorker is counted through marketing, outreach by the state agencies, and work with local governments. To support this effort, funds will be made available through Empire State Development,” the state’s economic development arm, Conwall said in an email.

Asked whether Cuomo supports the proposal, Conwall said the state would wait for the recommendations of the state’s Complete Count Commission.

Cuomo has said the state is facing a $2.3 billion shortfall in tax revenue.

Steve Choi, executive director of the New York Immigration Coalition, said organizations that he’d like to see get the money for the outreach include the MinKwon Center for Community Action and the NAACP.

Maloney spokeswoman Elise Anderson said a similar program was last funded for the 2010 census, but only at $2 million.

The proposal for $40 million came originally from the labor-backed Fiscal Policy Institute, which released a report in October on the idea, aiming to reach “hard to count” people and others.

According to the report, 24 percent of households in Suffolk County didn't respond to the census by mail; in Nassau County, that number is 23 percent.  The state's average number 24 percent, the report said.

DMV: 400,000 face delays in getting auto registration stickers
Suozzi: Hochul could 'do a better job' on COVID-19
Hochul meets with White House officials on infrastructure
CNN suspends Chris Cuomo for helping brother in scandal
Gov. Hochul frequently invokes her faith in public addresses
Top photos from around LI from November 2021
Didn’t find what you were looking for?