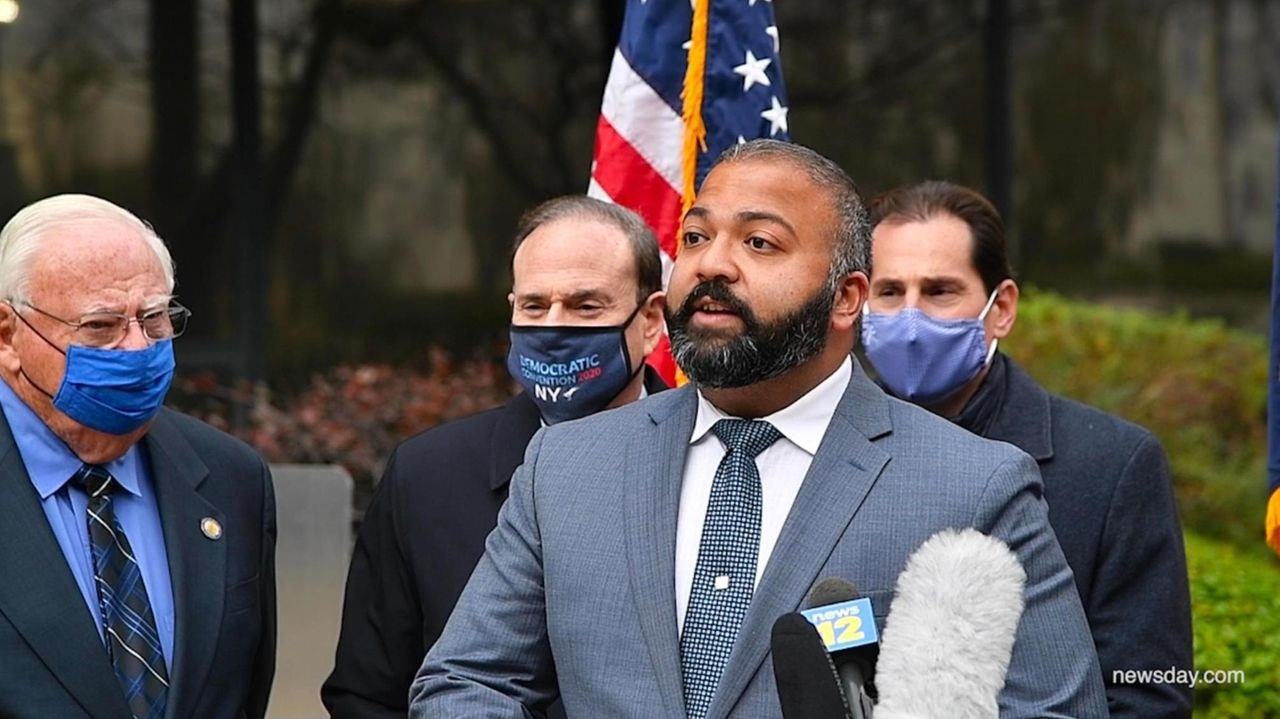 Sen. Kevin Thomas (D-Levittown) along with other other Nassau County Democrats gathered on Tuesday to celebrate his win after a count of absentee ballots reversed a lead by Republican Dennis Dunne.   Credit: Newsday / John Conrad Williams Jr.

As Suozzi celebrated, other Democrats watched the counting of absentee ballots to see if the edge in Democrats using mail-in ballots will be enough to overturn the totals in other races. Among those, the party said Assemb. Judy Griffin (D-Rockville Centre) also had won, like Suozzi, thanks to absentees.

On Nov. 3, Santos led Suozzi by 4,171 votes out of more than 275,000 votes cast through early voting and on Election Day, according to the state Board of Elections. But Suozzi said Monday that 79% of the early counting of 86,597 absentee ballot were going his way. He said he surpassed Santos by more than 13,000 votes on Monday.

"George Santos called me this morning to concede and congratulate me on my victory," Suozzi (D-Glen Cove) said in announcing the win for his third term. "I thanked him."

There was no immediate statement from Santos.

"Our nation faces tremendous challenges and the division is distracting us from accomplishing our goals," Suozzi said. "I will work to try and bridge the divide and address the COVID pandemic, our unstable economy, the climate crisis and the need to rebuild our middle class."

The district includes parts of Nassau and Suffolk counties and Queens.

State Democratic and Nassau County Democratic Chairman Jay Jacobs said Suozzi’s win is important in Washington, too, where the Democrats’ control of the House has narrowed.

On Tuesday, state Sen. Kevin Thomas at a gathering of Nassau County Democrats celebrated his win, which had hinged on the count of absentee ballots that reversed a lead by Republican Dennis Dunne.

Thomas (D-Levittown) had a lead of 1,427 votes by late Monday when Dunne conceded.

Thomas had been targeted by Republicans and independent groups that criticized Senate Democrats on Long Island for supporting measures that ended bail in most cases.

In the Assembly, Jacobs declared Griffin to have defeated Republican Patricia Canzoneri -Fitzpatrick in the 21st Assembly District in Nassau County. Griffin had led by just 447 votes on Nov. 3 out of 54,585 votes cast, but the lead grew when all absentee ballots were counted, Jacobs said.

"This victory is a win for all of us!" Griffin said.

As of 7 p.m., the Board of Elections said Griffin had a 4,619-vote lead. Shortly thereafter, Canzoneri-Fitzpatrick issued a statement saying she'd called Griffin to congratulate her.

"My campaign focused on the issues of community safety and taxes, two topics that are impacting neighbors throughout Long Island and in the 21st Assembly District. I will continue to fight for legislative action to make our communities safer, and I will work to restore financial responsibility in New York State’s government," Canzoneri-Fitzpatrick said.

Jacobs also was hoping to pick up a win the 5th Senate District races, which covers parts of Nassau and Suffolk counties.

There, freshman Sen. James Gaughran (D-Northport) trailed Republican Edmund Smyth by 13,844 votes cast in early voting and on Election Day. But there were 43,906 absentee votes cast — 21,322 by Democrats compared with 9,417 by Republicans, according to records from both counties. Voters not enrolled in a major party cast another 11,185.

After Nassau's absentees were tabulated, Smyth's lead was just over 4,000, Democrats said.

"There are nearly 15,000 outstanding absentee ballots left to be counted in Suffolk County," Gaughran spokeswoman Marissa Espinoza said. "While the ballots are overwhelmingly trending Democratic, our democracy demands every ballot be counted. I’m confident that this full count will favor Senator Gaughran."

In another Nassau contest, Republican David Franklin called to concede to Sen. Anna Kaplan (D-North Hempstead), a Kaplan aide said Tuesday. Latest returns showed Kaplan, who was running for a second term, holding a lead of more than 8,000 votes.

Elsewhere, Democrats said they won a hotly contested seat in Rockland and Westchester counties, thanks to absentee ballots.

Democrat Elijah Reichlin-Melnick initially trailed Republican William Weber Jr. by 3,149 votes after Election Night with nearly 30,000 absentees to be tallied. By Tuesday, Reichlin-Melnick led by 2,000 by capturing about two-thirds of the absentee count so far, according to the Democratic Senate Campaign Committee.

This was an open seat Republicans sought to flip, vacated by Sen. David Carlucci’s unsuccessful bid for Congress.