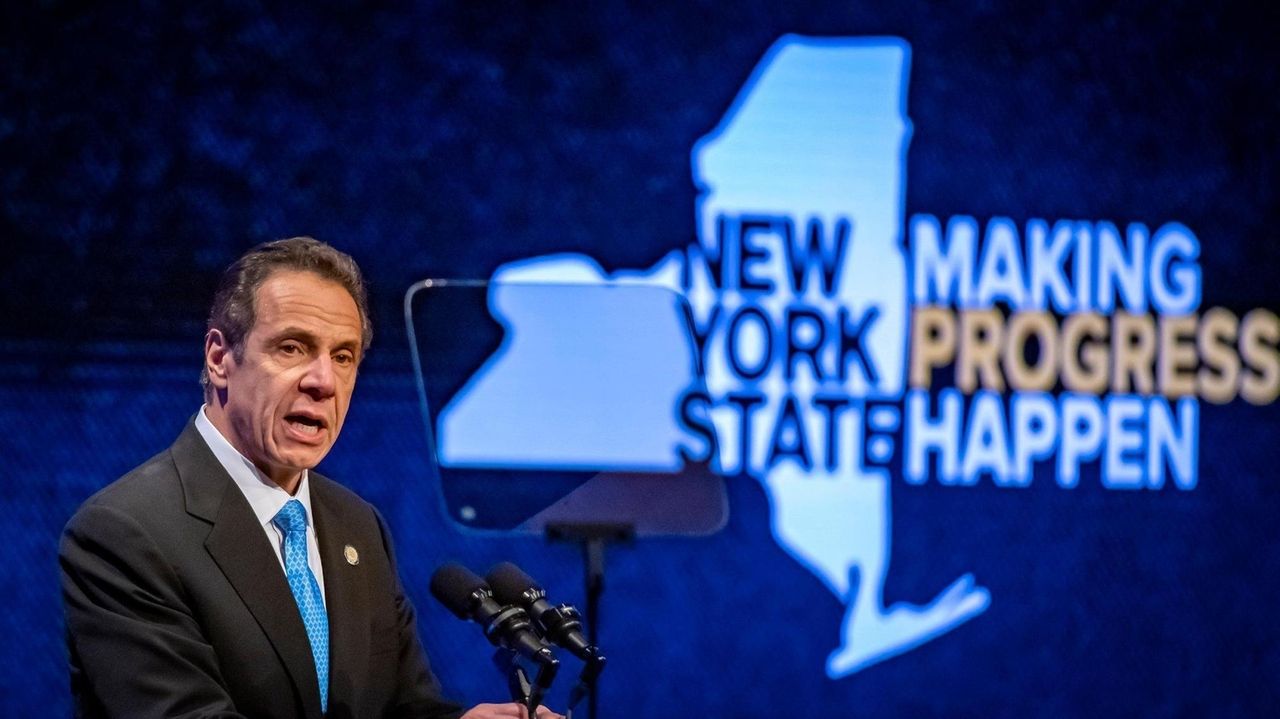 ALBANY — Gov. Andrew M. Cuomo on Wednesday kicked off the 2020 session of the New York State Legislature, calling for a massive expansion of Penn Station, passage of a $3 billion environmental bond act and a tax cut for small businesses — while trying again to legalize recreational marijuana.

Cuomo, a third-term Democrat, outlined his vision for the year in his annual State of the State address at the Empire State Plaza Convention Center.

The speech typically represents the governor’s chance to outline a wish list for the year without having to explain in detail how to pay for everything. New York this year has an estimated $6 billion budget gap.

Some cost nothing — such as outlawing Styrofoam cups, flavored electronic cigarettes and robocall scammers.

Some cost a lot of money but the bills don't come due soon — expanding Penn Station in Manhattan, studying high-speed rail upstate and funding environmental projects.

Others are proposals dealing with issues such as marijuana legalization, electric bikes and automatic voter registration that weren't passed during the busy 2019 legislative session.

In sum, the governor’s agenda reflected a lower-profile agenda than in 2019, when he and the Democratic-controlled legislature approved an expansive list of progressive legislation on abortion, bail, climate change, guns, immigration, sexual harassment and rent control.

All those issues had been bottled up by a Republican-led State Senate until the GOP lost its majority in the 2018 elections.

As in the past, Cuomo told legislators and audience members it wasn't enough to claim to be progressive. They must achieve progressive goals.

Assembly Minority Leader Will Barclay criticized Cuomo's speech as a "mishmash of ideas" that failed to confront New York's "affordability crisis" that has triggered population loss.

"These are not proposals of promise, but rather a misguided mishmash of ideas that fails to confront the real issues we face and the reasons people are leaving New York in droves," said Barclay (R-Pulaski).

"New York’s property taxes are among the worst in America, out-migration has severely diminished our tax base and New York continues to lag other states that are enjoying a strong national economy," Barclay said. "Any speech that fails to address these obstacles to prosperity in our state is incomplete and inexcusable."

Some of Cuomo’s initiatives were previewed in the weeks leading up to his address.

Cuomo called for increasing the income level for families to be eligible for the Excelsior Scholarship from $125,000 to $150,000. The scholarship provides a pathway for students to have tuition fully covered at the State University of New York system after exhausting all their federal grants, loans and other aid.

Cuomo again urged state lawmakers to legalize the recreational use of marijuana — a plan that was hung up last year over arguments about tax rates and how the proceeds would be used.

He also proposed a "global cannabis center" for research, to be housed on one of the SUNY campuses.

The governor didn't provide many specifics for tackling the budget deficit, but those are expected to be outlined later this month.

Cuomo did refer to the growing costs of Medicaid. He noted that state government has been covering more of counties' share, saying the "situation is unsustainable." Later, a Cuomo aide said the governor wasn't proposing to lift a cap on counties' cost.

The governor also addressed a spate of hate crimes in the state and what he called the "angry winds" of racism threatening the nation.

“We see it in housing discrimination on Long Island,” he said. “This hatred and division is an American cancer … it is this country consuming itself from within … if we don’t defeat it, it will defeat us.”

Cuomo was referring to a Newsday report in November, "Long Island Divided," that found evidence of widespread unequal treatment of prospective minority homebuyers compared with whites.

Cuomo and state legislators have launched probes of allegations of housing discrimination revealed in the Newsday report.