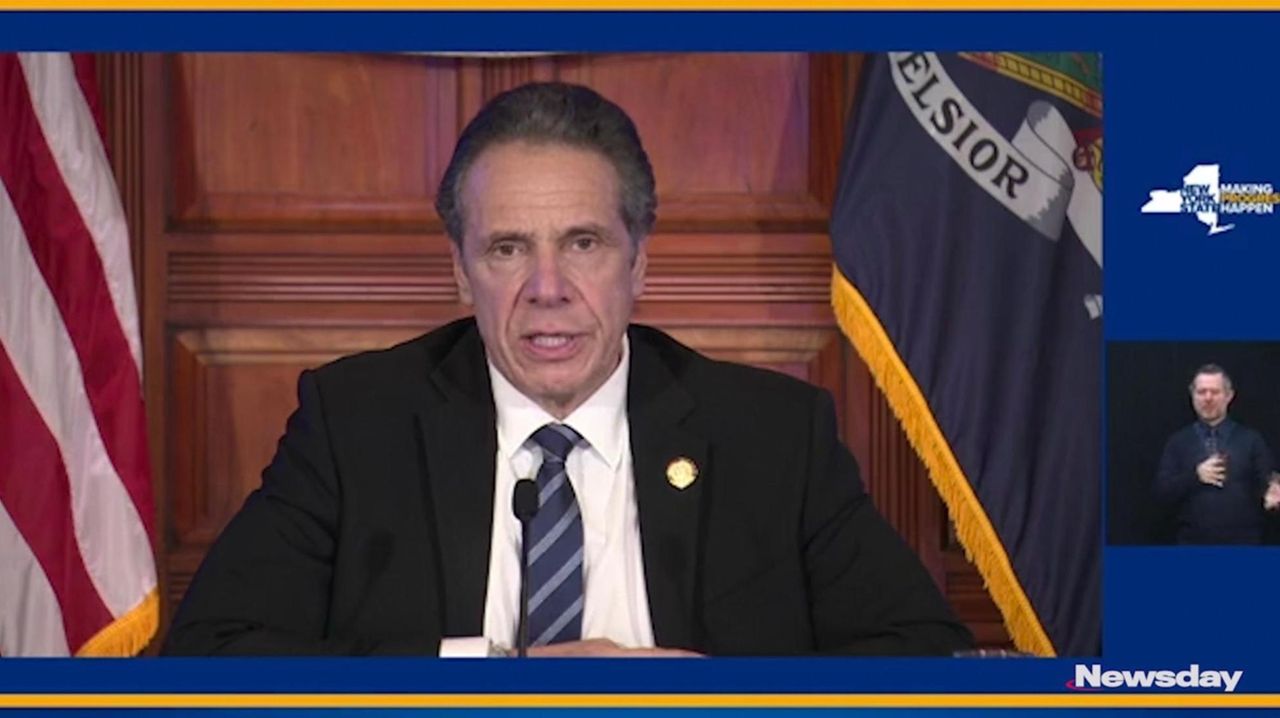 On Wednesday, Governor Andrew M. Cuomo said part of his state of the state will be a proposal to legalize sports betting run by the state, not a casino, and create a comprehensive system to oversee and regulate cannabis. Credit: NY Governor's Office

ALBANY – Gov. Andrew M. Cuomo announced his support Wednesday for legalizing online sports betting and renewed his call for legalizing recreational marijuana, a sign lawmakers will pursue an array of revenue streams to deal with a massive state budget shortfall triggered by the pandemic.

Cuomo, a Democrat, previously had been hesitant to back online sports betting, saying it would produce a small amount of revenue in the context of a $178 billion state budget.

But with New York facing a $8 billion shortfall this year and $15 billion over two years, the governor says he will include online sports betting in his budget proposal for fiscal 2021-22, which he’ll unveil later this month. Cuomo's support means the long-stalled proposal now is more than likely to be approved this year.

"At a time when New York faces a historic budget deficit due to the COVID-19 pandemic, the current online sports wagering structure incentivizes a large segment of New York residents to travel out of state to make online sports wagers or continue to patronize black markets," Cuomo said in a statement. "New York has the potential to be the largest sports wagering market in the United States, and by legalizing online sports betting we aim to keep millions of dollars in revenue here at home, which will only strengthen our ability to rebuild from the COVID-19 crisis."

A key element of Cuomo's proposal is that any company seeking to operate or provide a platform for online sports betting must form a partnership with one of the existing casinos in the state. Casinos, which have been struggling in New York, had been pushing for this to ensure online sports betting doesn't take away too much of their business.

At same time, Cuomo made a new push for New York to join other states in legalizing marijuana. The governor and the Democratic-led Legislature have sought to do so for two years now. In 2019, talks stalled on whether tax proceeds generated by marijuana sales should all go to the state coffers or apportioned so that some money goes to help communities impacted by unequal enforcement of pot laws.

In 2020, marijuana talks barely started when the COVID-19 pandemic hit and brought most legislative proceedings to a halt.

"Not only will legalizing and regulating the adult-use cannabis market provide the opportunity to generate much-needed revenue, but it also allows us to directly support the individuals and communities that have been most harmed by decades of cannabis prohibition," the governor said in a statement.

Cuomo said his new marijuana proposal "offers the opportunity to invest in research and direct resources to communities that have been most impacted by cannabis prohibition."

Among other aspects, Cuomo said sales would be limited to those at least 21 years old.

The lead senator on the issue said the governor's proposal was welcomed news, but said she'll want to see the details about how the tax money would be distributed. The Legislature has criticized Cuomo previously for wanting to channel too much of the money into the state's general fund, which he controls.

"As always, the devil is in the details, and I look forward to reviewing legislative language and working with the governor and my colleagues in the Legislature to finish the job," said Sen. Liz Krueger (D-Manhattan), "and do it right — ensuring that resources are directed to those communities most directly impacted by the failed policies of the so-called 'War on Drugs.'"