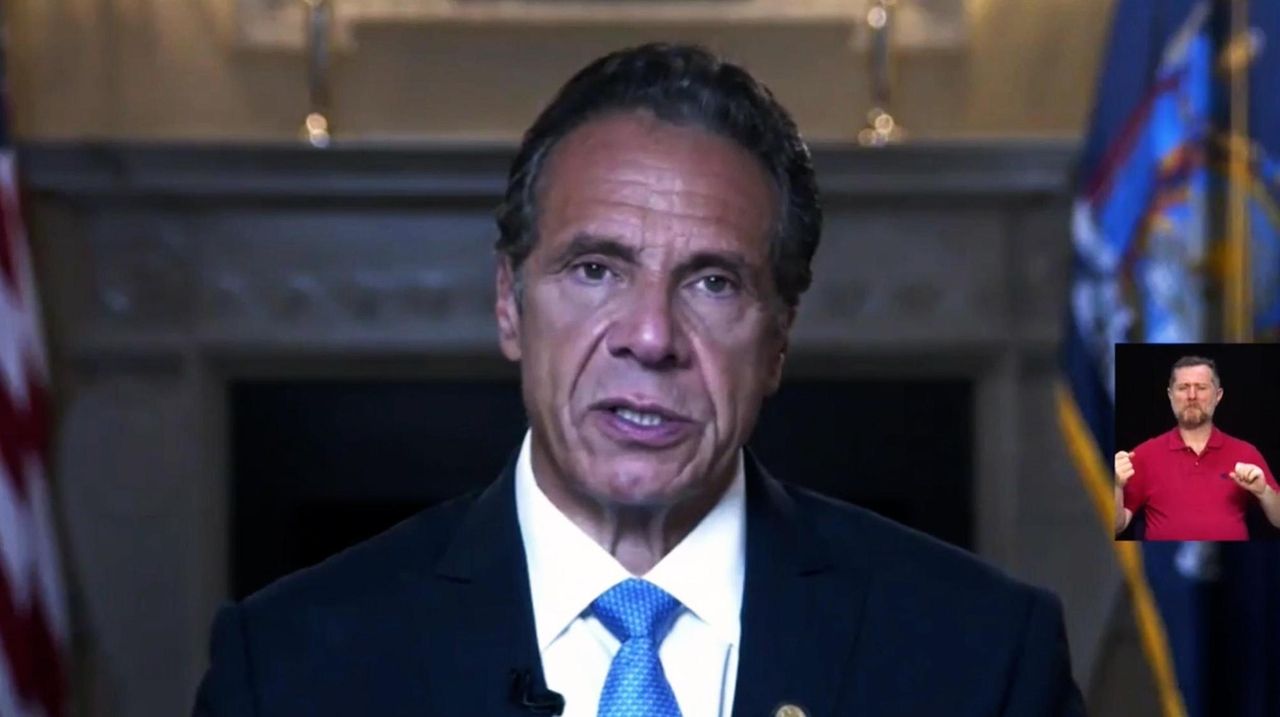 Gov. Andrew M. Cuomo on Monday delivered his farewell address before stepping down. He criticized the sexual harassment probe that triggered his resignation, claiming State Attorney General Letitia James' report "was designed to be a political firecracker on an explosive topic." Credit: NY Governor's Office

ALBANY — Gov. Andrew M. Cuomo, with just hours to go in his tenure, took some parting shots at legislators, progressive Democrats and the sexual harassment investigation that triggered his resignation, calling it a "political firecracker" intended to drive him from office.

Cuomo delivered his remarks in a pretaped "farewell address" streamed online at noon, 12 hours before his resignation becomes effective.

Further, he faced an imminent impeachment vote in the state Assembly. A committee has been investigating not just the harassment claims but also allegations of undercounting nursing home deaths caused by COVID-19 and using state personnel to produce a pandemic memoir that landed him a $5.1 million book deal.

He called the anger with him a "rush to judgment."

"The Attorney General's report was designed to be a political firecracker on an explosive topic and it worked," Cuomo said. "There was a political and media stampede. But the truth will out in time — of that, I am confident."

The exiting governor highlighted some achievements in his 15-minute address, but not until he took shots at his accusers and investigators and criticized fellow Democrats whom he said want to "defund the police" and "demonize business." He even delivered one last dig at New York Mayor Bill de Blasio, saying the frontrunner to replace de Blasio, Eric Adams, will bring "competence" to the office.

To the end, he maintained he was leaving not because of the investigation’s findings or likely impeachment but because staying and fighting would cause "government paralysis."

As he said when he announced on Aug. 10 his intention to resign, Cuomo said his "instinct is to fight" because the investigation was "unfair and unjust."

"100000000 opportunities to be a better leader. Chose himself every time. Goodbye, Governor Cuomo," Assemb. Yuh-Line Niou (D-Manhattan) wrote on Twitter.

Cuomo, in a recent interview, implied he could win an impeachment fight but that ignored the fact that 59 of the 63 state senators and at least two-thirds of the 150-member Assembly had called for his ouster.

After governing New York with a bullying style since taking office in 2011, Cuomo had few allies left in Albany. Even Democratic President Joe Biden said the governor should step down.

Turning to his record, Cuomo touted ushering through plans to rebuild airports, bridges and Penn Station, projects to strengthen the power grid and his administration efforts to combat the COVID-19 pandemic.

"In sum, we didn't get everything done that we wanted to, or even everything we should have done," he continued. "And we didn't always get it quite right. But I want you to know from the bottom of my heart, that every day I worked my hardest. I gave it my all and I tried my best to deliver for you."

Cuomo touched on the pandemic, saying his parting advice was to mandate vaccinations for schoolteachers, require masks in high-risk areas and compel private businesses to mandate proof of vaccination for large gatherings.

Lt. Gov. Kathy Hochul, a Buffalo Democrat, is set to take over at midnight, becoming New York’s first woman governor. She wasn’t close to Cuomo, despite serving as his lieutenant for nearly seven years — he tried to boot her from his campaign ticket in 2018. Still, Cuomo offered praise for his replacement.

"I believe she will step up to the challenge," Cuomo said. "We all wish her success."

He didn’t say what his next steps are. But it won’t include running for office, said Melissa DeRosa, longtime secretary to the governor.

"He looks forward to spending time with his family and has a lot of fishing to catch up on," DeRosa said in a statement issued about two hours before Cuomo’s address. "He is exploring a number of options, but has no interest in running for office again."

Cuomo's departure marks end of an era in Democratic politicsHis resignation may also mean the end of the days of the imperial governors, who imposed their will on the State Legislature, political analysts say. Hochul sworn in as New York's first female governorShe took the oath of office after midnight to replace Gov. Andrew M. Cuomo, who has resigned. 5 challenges facing Hochul as she becomes governorThe issues range from dealing with the pandemic to setting a new tone that differs from her predecessor's and filling out her staff.